Jimmy Van Horn (David Zellner), a Texan businessman seeking an opportunity, has $40,000, a little good ol’ boy charm, and a lot of stetson. He carries the black hat in a protective case when he’s not wearing it, and it serves as a talisman of his stupidity.

Though he’s past forty, the Woody Harrelson-like hero of John Maringouin’s Ghostbox Cowboy is far too naive to make a quick fortune exploiting Chinese consumers on their homeland, but that’s what he sets out to do. Just like Jon Voight’s Joe Buck in Midnight Cowboy (1969), the inspiration for this satirical docu-comedy, Jimmy has got more hope than sense. His inevitable comeuppance is moral payback for his rootin’, tootin’ attempt to practice Manifest Destiny by mass-marketing a worthless gizmo to the citizens of Dongguan and beyond. 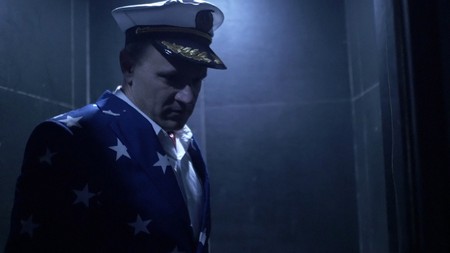 Kaleidoscopically filmed by Maringouin, Justin Donais, and Nathan Slevin, and doomily scored by Casey Wayne McAllister, Ghostbox Cowboy takes a sardonic view of greedy Americanos trying to get rich in the new promised land of mainland China. Their assumption that the Chinese are there to be taken is refuted by the tough local business people who read Jimmy the riot act when he demonstrates his ineptitude.

On his arrival, Jimmy falls in with a couple of hustlers from the old country, Specialist (played by an actor called Specialist), who has been able to prosper because he speaks Chinese, and Bob (Robert Longstreet), a hard-partying sexuagenarian sleazebag who is the film’s equivalent of Midnight Cowboy‘s “Ratso” Rizzo (Dustin Hoffman). They have access to teenage Chinese millionaires, one of whom backs Jimmy’s “Ghoster,” a small black box with leds that can supposedly exorcize ghosts from the home.

Briefly, Jimmy and Bob find themselves living large with hookers, booze, and cocaine, though Jimmy goes too far when he hires 200 Russian prostitutes for a party. He loses control of Ghoster (though later finds one being hawked for several hundred bucks on the street) and is reduced to making personal appearances as a faux American movie star in a blond wig. His singing of “Here Comes the Bride” at a Communist wedding in the countryside is so lame that his female boss fires him. A figure resembling Bob who is seen groveling on a street in his blond wig suggests he, too, has come to grief. 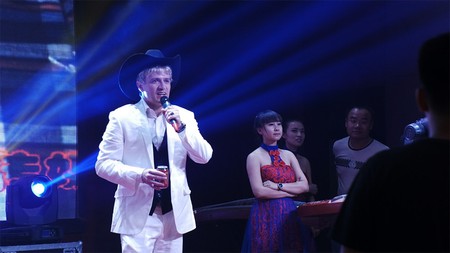 Perplexed by his failure, Jimmy goes in search of Johnny Mai Thai (J.R. Cazet), a mythical puller-of-strings reminiscent of Marlon Brando’s Kurtz in Apocalypse Now (1979). Whereas Marlow (Martin Sheen) finds Kurtz after passing under the psychedelically lit Do Lung Bridge, a single lit window in a residential wasteland indicates to Jimmy where Johnny is living. It also warns him that he won’t get much illumination from this sinister guru. We don’t either.

There is a timely warning in Ghostbox Cowboy. American buccaneers and other imperialistic chancers who think Chinese business people are peasants ripe to be exploited will find that they are sharp, unforgiving operators who won’t tolerate fools gladly as they build the world’s second business economy. Yankees go home!

Ghostbox Cowboy is screening at the Tribeca Film Festival on April 25. Look for tickets here.