Transfiguration: China at the Venice Biennale

For the 5th time since 2005, China brings a contingent of artists to Venice to partake in the most anticipated international arts exhibition in the world. Wang Chunchen, who heads the curatorial research team at CAFA Art Museum at the Central Academy of Fine Arts in Beijing, China’s most prestigious arts institution, brings his curatorial expertise to the theme of ‘Transfiguration‘. 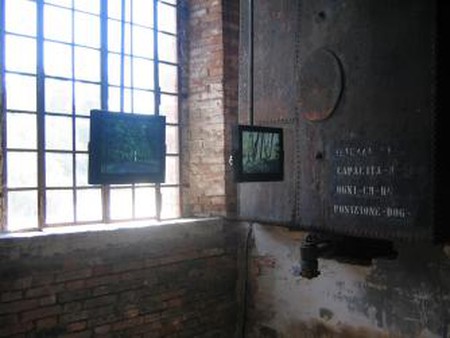 According to Wang, the curatorial theme of ‘Transfiguration’ is his response to the utopian concept of the ‘Encyclopaedic Palace’, a place where all human knowledge can be collected and revered. Searching for a translation that encapsulates Wang’s concept, he settled on the phrase ‘变位’, which means ‘changing tastes’. Whilst largely ignoring the term’s Christian roots and in spite of there being no Chinese equivalent, Wang chose to adopt a word that evokes renewal as well as the rupturing of accepted boundaries to mirror the dramatic changes sweeping through not only the Chinese art world, but also through the country’s economic and social spheres. ‘Transfiguration’ also refers to the blurring between life and art, non-art and art.

This year, the seven artists selected by Wang will seek to reveal the sophistication, maturity and diversity of contemporary art in China through their works. Facing the constraints of a particularly challenging space (the China Pavilion is a converted ship building warehouse filled with antique oil tanks, poor lighting, and limited space to exhibit), Wang’s medium of choice for the Pavilion is video projection. With artistic backgrounds ranging from painting to video, photography and installation, the artists whose works have been selected for the China National Pavilion are He Yunchang (何云昌), Hu Yaolin (胡曜麟), Miao Xiaochun (缪晓春), Shu Yong (舒勇), Tong Hongsheng (童红生), Wang Qingsong (王庆松) and Zhang Xiaotao (张小涛).

Born in Yunnan in 1967, He Yunchang’s works have been exhibited internationally. Primarily a performance artist, He Yunchang has gone to extremes for his art; in 2008, coinciding with the opening day of the Beijing Olympics, He performed One Rib – drugged and unconscious. In this piece, He willingly underwent an unnecessary medical operation to remove his 8th rib as a reversal from his previous works such as Dialogue with Water and Wrestling: One and One Hundred that stressed the artist’s physical and psychological stamina. Though one might argue that the aftermath of having a rib removed is an endurance project in and of itself.

Not as widely known or exhibited as the other artists representing the China National Pavilion, Hu Yaolin’s large-scale installation works draw from the Huizhou architectural elements to reflect the transformation of contemporary China and the urban fabric.

Adept in 2D and 3D, with a background in photographic arts, Miao Xiaochun is a multimedia artist who has pushed the boundaries of photography as an art form bridging painting, digital art, graphic arts and installation. Moreover, his works amalgamate Western and Eastern art practices and motifs with abandon; he has transformed the hallowed bastions of Western art into digitised copies, replacing Michelangelo’s swarming Sistine Chapel figures with a virtual model of Miao himself, transforming Hieronymus Bosch’s Garden of Earthly Delights through digital mimicry.

Shu Yong isn’t the first Chinese artist to employ shock value in his art. Bubbles – and women – are recurring motifs in his works. In Bubble Woman VII Shu transforms stainless steel into massive breasts that protrude grotesquely from a nude female figurine. In a separate series, entitled Chinese Myth, the bubble reappears in a different form, evoking a different set of meanings. According to Shu, this motif ‘is free wheeling and full of possibilities’, lightly transforming from one meaning to another. 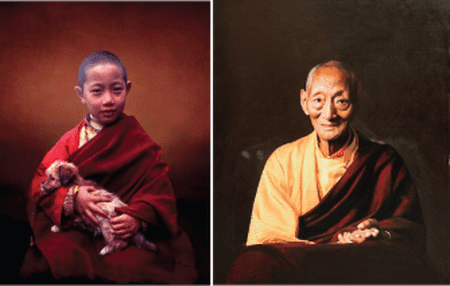 Tong Hongsheng’s works evoke religious imagery as well as the long tradition of Western art in his works. With his carefully staged visual aesthetics, luscious oil paints, dramatic lighting and partiality for portraiture, Tong could just as well fit into a Baroque repertoire. Unlike his Western counterparts, however, with their motifs of the Virgin or the Christ, Tong’s subjects are more often than not humble Buddhist monks of all ages dressed in traditional garb.

A multidisciplinary artist, Wang Qinsong works with photography and video as well as large-installation projects to critique the values of contemporary Chinese society. Safe Milk (2009) deliberately makes reference to the consumer-milk scandal that engulfed China in which milk tainted with melamine endangered the health of infants. ‘Temple‘ (2011) seemingly draws on Buddhist imagery to critique the wealth-obsessed superficiality of modern China that masks the rotting of the society. Follow Him (2010) addresses the education system in China in which ‘knowledge is taught but not learnt’ and students ‘study for their parents, for their grandparents, but never for themselves, for the love of knowledge itself’. 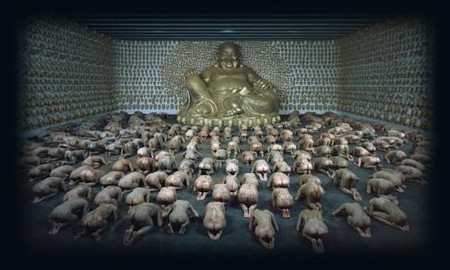 Zhang Xiaotao’s huge canvases teem with decaying life. Paint drips from his canvases as if rotting from the inside. Although Zhang primarily uses oil paints, his oils blur the lines between watercolour and oil, evoking traditional Chinese ink-brush painting. In his putrefying works, ants march across debris, a rat plunges head-first towards a pile of rocks; macro and micro, heroism and futility march side by side in Zhang’s works. 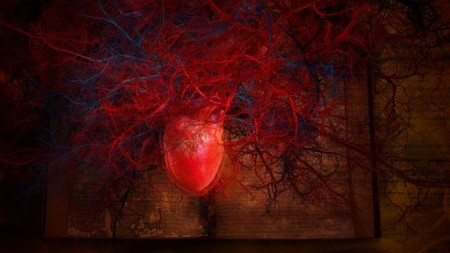 The Culture Trip showcases the best of art, culture and travel for every country in the world. Have a look at our China or Asia sections to find out more or become involved.