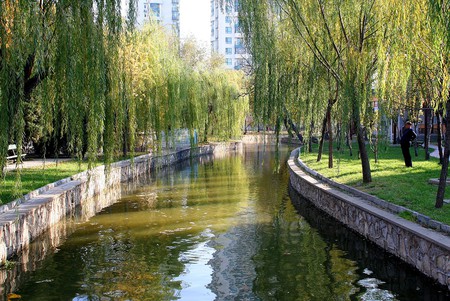 Tianjin is a major metropolis, but that doesn’t mean it lacks in quiet outdoor recreation. Being a port city, there are dozens, if not hundreds, of bodies of water scattered around town, and many feature a nice park around them. Escape the hustle and bustle of city life into serene natural oases, referred to in China as state parks. From indoor to outdoor, from classical Chinese to modern-themed, Tianjin features a varied selection of parks to explore, all of which are free to enter.

Tianjin’s popularly known Shuisheng Water Park is arguably the city’s largest, prime outdoor park. Whether you’re looking to glide up and down waterslides and rollercoasters or spend a nice quiet afternoon cruising its lakes in a private rented paddle boat, Shuisheng features three separate lakes and five islands to choose from. It’s also a happening place to witness traditional group dancing, and there’s a zoo nearby. And the best part, besides the free entry, is you can enjoy all Shuisheng’s extra perks at an average cost of 20RMB (US$3) or less.

Widely regarded as a hub for kite-flying enthusiasts, Taifeng Park is actually lesser known than it should be. Don’t worry if you don’t have a kite…or even know how to fly one. You can purchase a kite in the park, and if you ask a fellow flyer for help, they’ll surely volunteer to teach you a few techniques. If you happen to be in the Binhai district, stroll over to this quaint park with lovely sea breezes and its very own lake situated in the heart of the park.

A park with various sections of entertainment, Changhong Park is said to be the first park in Tianjin to have removed its entrance fees and become open to the public. Its sections include areas with outdoor fitness equipment, water activities, outdoor amusement, and a specialized zone for tropical vegetation. Like Taifeng Park, Changhong is frequented by kite flyers, in addition to having its very own miniature “Ancient Culture Street” lined with refreshments and snacks.

Regarded as the most versatile of all parks in Tianjin, Nancuiping is so large that it is divided into six sections. A favorite reason for locals to visit is for a run at night, given that its mountain peaks have running trails. But if your time is only free during daylight hours, take advantage of this massive park and come for a brisk walk or jog.

Perhaps the most beloved of all parks in Tianjin by locals, People’s Park is praised for its classical Chinese décor with temples and bridges that complement the serene surroundings. Get in touch with a more ancient feeling of China, and visit the somewhat hidden park of the Ao Cheng area, not far from Tianjin Foreign Studies University.

Central Park is located not far from Tianjin Railway Station and The Astor Hotel in the heart of the city. This small, quiet park is actually in a perfect circular design, making it seem like the oasis of downtown Tianjin. It’s said to be a place to find many chess players, and its signature statue stands assertively within it.

Have an hour to spend? The Tropical Botanical Garden of Tianjin may bring in mixed reviews from its patrons, but the good news is that it’s entirely indoors. There are thousands of plants to view if you’re looking for a low-key way to spend some time around greenery, but can’t get outside. If you have kids with you, even better, since there’s ample room for children to play inside as well.

At the foot of the gargantuan TV and Radio Tower of Tianjin lies this scenic lake. While the space to roam through after you exit the tower is a bit limited, and, admittedly, it’s more rewarding to see the lake from the rotating observatory at the top of the tower than it is to be on ground level, a quick walk around the lake is a pleasant diversion.