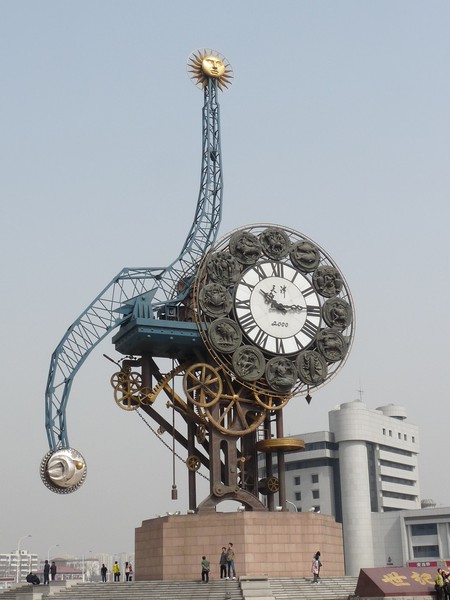 Tianjin is one of the most underrated megacities of China. Although it’s less revered than its tier counterparts of Beijing and Shanghai, don’t discount what this metropolis has to offer. Tianjin is a blend of pre-modern European flair, traditional Chinese culture and has a plethora of sites to see. Of the hundred of landmarks in Tianjin, here are some of the most important.

Not only is this 394 foot (120 m) tall Ferris wheel the only one in the world built on a bridge. It also offers the best views in the whole of Tianjin. A ride takes 30 minutes and you can watch as boats cross below through the bridge. During the day you can see all the variations of the classic European and modern architectural icons that define Tianjin. In the evening you will get a magnificent view of the glistening city lights. Tip: save his for a clear and sunny day. 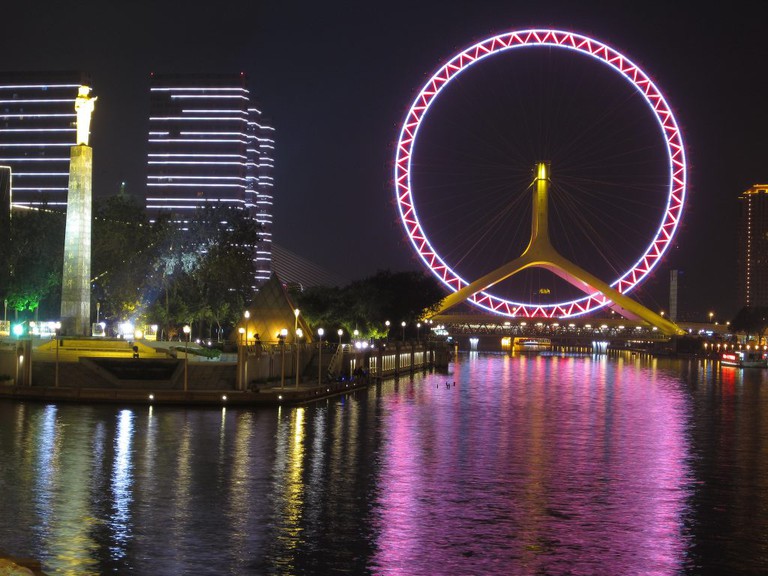 Don’t miss this small but amazing temple that dates back to the Yuan Dynasty when you visit Ancient Culture Street. Enter Tianhou Palace, a Taoist temple built in 1326 to honor of Goddess of the Sea, Mazu. This sacred site is now a public museum and is a highlight of the bustling shopping district.

The first thing you should know is that instead of mannequins, Quanye Bazaar has live models for showcasing clothing. The iconic shopping destination stands five stories tall, spans a block, and still maintains its classic European appeal. Designed by a Fench architect in 1928, be sure to check out all nine of its department stores. 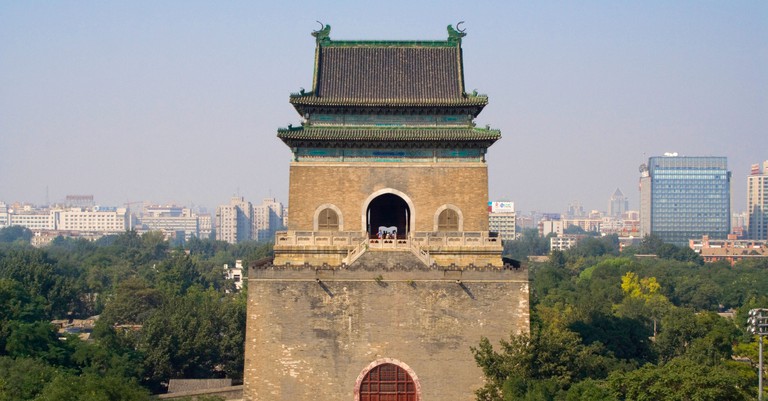 The Bell Tower once dominated the skyline of Beijing | © dbimages / Alamy Stock Photo
Dating back all the way to the Ming Dynasty, this tower was unfortunately destroyed during the cultural revolution of the mid-1900s. But the Drum Tower stands reborn today and houses photography and antique exhibits to help preserve the memory of what once was.
Open In Google Maps
ShiChaHai, Dongcheng Qu Beijing Shi, 100007, China
Give us feedback

Regarded as one of Tianjin’s most important landmarks, Xikai church was constructed in the early 1900s by the French. Still well used today, the interior is beautifully refurbished and features statues and paintings that you would expect to find in Europe.

Central to Italian Style Street is in Tianjin’s Marco Polo Square. Paying homage to the Italians who once occupied this portion of the town, and the explorer, Marco Polo who was among the most famed visitors to the Eastern world. Near the square are European-style restaurants, stores, and shops. At night, swing by to experience some of the city’s best nightlife.

Ancient Culture Street is fully designed to be reminiscent of the Qing Dynasty era. Tianjin’s deluxe shopping street is bound with limitless options of food and merchandise. From renowned local snacks to craftwork from local artists, potters, and silk clothing designers, Ancient Culture Street is a landmark in itself. Having tea at a tea house is a facet of Chinese culture, but at Mingliu Teahouse, you’ll discover something more. Crosstalk is a cultural keepsake of Chinese comedy, and it was started in Tianjin. Come to Mingliu to experience the live show for yourself and witness two dueling hosts try to both compliment and outwit one another in Tianjin fashion. Best to bring a translator if you’re not fluent in Mandarin.

Memorial, Building
Facebook
Email
Twitter
Pinterest
Copy link
Share
Map View
At the end of the steel retractable bridge of Jiefang is the illustrious timekeeper, Century Clock. This structure isn’t actually that old, yet it’s impression is timeless. The lunar clock may not actually work, but its design brings to life the 12 astrological signs. The symbols of Taurus, Capricorn, Pisces, and the nine other icons each have their own slice of the clock.
Open In Google Maps
Hebei District Tianjin, China
Give us feedback

The original site of the Astor Hotel is hidden, but it’s as historically relevant to hotels in China as it gets; one of the first hotels in China. Go underground to see the museum: a slice of the Victorian era’s hospitality age.

Hidden downtown is an important relic of the past. The Temple of Confucius was erected in the early Qing Dynasty and frequented by Tianjin’s leaders. Still standing today, this temple features a singular honor to the great Confucius as well as other halls of prayer.

This telecommunications tower was built in 1991 and is one of the tallest towers in the world. Two-thirds of the tower’s walkable space is an observation deck, complete with a revolving restaurant. Surrounded by water, here you can get one of the best views of Tianjin’s skyline.