This Robot Chases the Sun to Keep House Plants Alive 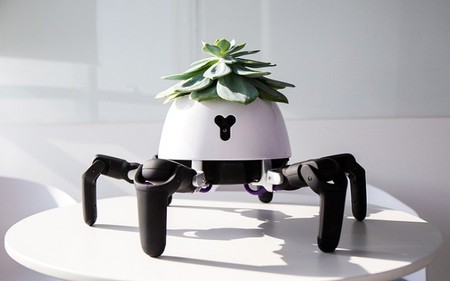 Chinese roboticist and entrepreneur Sun Tianqi has created a six-legged robot that chases the sun to keep potted plants alive.

After seeing a wilted sunflower in a shadowy corner of a tech exhibition, Chinese roboticist and entrepreneur Sun Tianqi was inspired to create a robot capable of chasing the sun in order to look after potted plants.

The autonomous robot uses infrared and a 720p camera to sense and seek out the sun when needed, retreat to the shade when it has had enough, and perform a ‘dance’ if its plant needs to be watered.

To create the device, Tianqi hacked the HEXA, a six-legged open-source robot developed by his company Vincross to encourage people without knowledge of complex hardware and mechanics to create interesting robots of varied functionality.

To build the robot – the latest iteration of a project Tianqi began in 2014 called ‘Sharing Human Technology with Plants’ – the entrepreneur equipped each leg with three motors and replaced HEXA’s plastic shell with a custom dual-layer flower pot.

“Human beings go to [the] deep ocean and moon through technology,” Tianqi wrote in a blog post about the device. “Let’s share some of [the] technology with plants, [to] let them at least experience what it is like to experience the simplest of motions.”

Programmable HEXA robots are available on the Vincross site for $949 (£724).