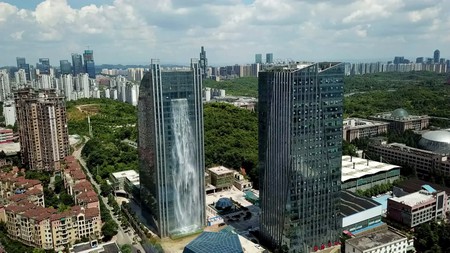 The 121-metre-tall building in southwest China may look impressive with a giant waterfall cascading down its facade, but there’s a fundamental flaw in its design.

While the Liebian International Building is yet to be completed, the dramatic water feature was finished in 2016 and has only been switched on a handful of times since. 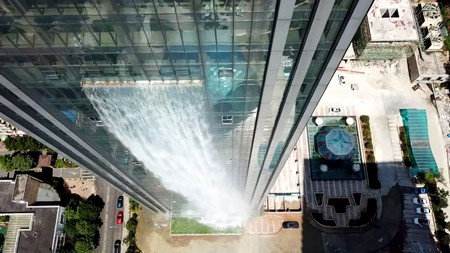 According to Cheng Xiamao, director of the Ludi Industry Group, the architect’s original vision for the building in Guiyang – an area enclosed by mountains and forests – was to replicate the sense of being surrounded by water and greenery in the heart of the city.

But the spectacular design has come at a price. Despite using rainwater and waste tap water for the waterfall, it allegedly costs around £90 per hour to run the 108-metre structure, which would equate to £760,000 per year if it were to be left on constantly. As a result, the building has already been heavily criticised for its high running costs and ostentatious design. 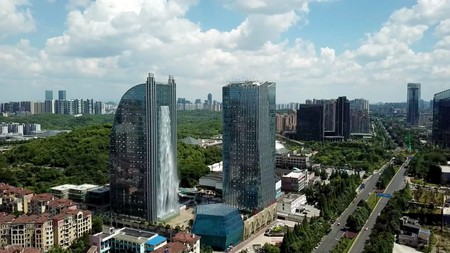 The Liebian International Building is one of several eye-catching buildings that have been planned to capitalise on China’s construction boom. The influx of building in China has led to more and more developers using complex designs to attract the attention of contractors.

Recent distinctive buildings include a giant doughnut-shaped skyscraper in Guangzhou by Italian architect Joseph di Pasquale, a huge horseshoe-shaped hotel in Huzhou by MAD and the Gate of the Orient in Suzhou that’s become nicknamed ‘The Big Underpants’. 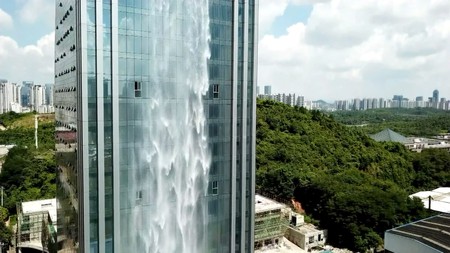 It costs around £90 an hour to run the waterfall | © Ruptly

China’s President, Xi Jinping, called for an end to “weird buildings” in a two-hour speech given in Beijing back in 2014, claiming that art should serve the people and called for architecture that will “inspire minds, warm hearts, cultivate taste and clean up undesirable work styles”.

Despite the fact that the latest Liebian International Building is enormously expensive to run, this won’t be the last time a waterfall is incorporated into building design in Asia. Grimshaw is due to create a 50 metre-high water feature at the Chinese Eden Project, which will become the world’s tallest indoor waterfall, while Singapore’s Changi Airport will also feature a 40-metre waterfall at its centre. 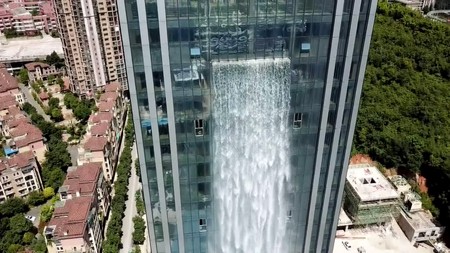 The waterfall has become a major tourist attraction | © Ruptly

Full details of the tower aren’t readily available, but it is known that the skyscraper is part of a complex that includes another equally tall structure that will contain offices and a luxury hotel, while a central podium will house a shopping complex.

Want more on skyscrapers? Read the backstory behind New York’s five iconic buildings and find out why architects are turning to timber to build sustainable skyscrapers.