The Most Daring Delicacies In The World 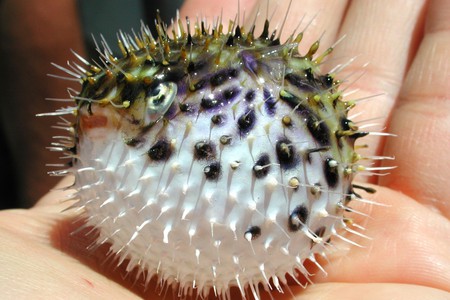 The world of gastronomy is full of mysteries. ‘It was a bold man that first ate on oyster’, wrote Jonathan Swift over three hundred years ago. There’s a saying that you should try everything once, but what follows below is a list of the slightly weirder delicacies from around the world. Some sound mad, some sound bad, and some are so daring they’ll get you into trouble with the authorities…

The Century Egg has been a Chinese delicacy since the days of the Ming Dynasty five centuries ago. Duck, chicken or quail eggs are preserved in an alkaline mix of salt, clay and quicklime for months. The yolk turns a green or grey colour and the white becomes translucent, at which point the eggs are served at banquets and other special occasions. When opened up, they have a strong ammonia-like scent, not dissimilar to urine. There was a long-standing rumor that the eggs were made by soaking them in horse urine – but that’s since been disproved.

Cheese has become a staple food around the globe. But how about cheese with some nice live maggots thrown in? The Sardinian cheese Casu Marzu comes with some tempting maggots to increase the level of fermentation in the cheese. It’s eaten along with strong local red wine and has a flavor so potent that it can linger on the palate for hours afterwards. The EU have tried banning the stuff, but only managed to create a flourishing black market for Casu Marzu.

Quite how the Icelanders ended up coming with Hakarl, no one knows. Smoking, sousing, and salting are all known ways of preserving fish, but at some point they decided to take a shark, gut it, then bury it in a hole to dry out and ferment for weeks, before digging it up and leaving it hung for months before serving it in cubes. The scent is so strong that first-time eaters often gag, and Chef Anthony Bourdain described Hakarl as the worst thing he’d ever eaten. The Icelanders regard eating it as a show of masculine vigor.

Gascony is one of the great regions for French gastronomy, and the Ortolan its most controversial delicacy. This tiny songbird is caught in huge nets as it migrates to Africa, then kept in a blackened cage so that it keeps feeding, before being drowned in Armagnac to marinate. They’re roasted, plucked and served whole to be eaten with a towel over the head to keep in the aromas. The flavor is said to be wondrous – Proust loved them, so did President Mitterrand, but since 1999 the EU has banned the catching of the Ortolan.

Sheep’s Eyes aren’t just a delicacy in the Arab world and across Central Asia. They’re also much valued in Norway where the dish of smalahovud, consisting of a warm sheep’s head, is traditionally served in the run-up to Christmas. In traditional Arab and Berber cultures, the law of hospitality dictates that the guests get the choicest cuts, so western visitors often find themselves left to sample the eyes. You’re supposed to swallow them whole, but you’ll probably find yourself biting and chewing on a slightly crunchy, sinewy bag of wet jelly.

You might have been used to Captain Birdeye’s Fish Fingers when you were little, but if you’d been brought up in Japan then you might have sampled cod sperm sac, also known as milt in English, and shirako in Japanese, which translates literally as ‘white children’. It’s served up with other fruits de mer like crab, oysters and scallops and it’s said to taste remarkably good, almost buttery and smooth. Nor is it as strange as it might sound… we think of caviar as the ultimate luxury but that’s just cured roe lifted from the ovaries of sturgeon caught in the Caspian or Black Sea.

Balut is a boiled egg with a difference. It’s been fertilized and incubated for up to 21 days, meaning there’s a developing embryo in the egg. In the Philippines, Laos, Cambodia and Vietnam they like to knock off the shell and serve the contents with some vinegar and sauce, with an omelette or a dash of salt and lemon. The eggs come from chickens or ducks, with mallards said to make for the best balut. It’s full of protein and calcium and in the East they claim balut will cure a hangover and boost your libido.

Speaking of boosting your libido, nothing quite beats chewing on bull’s penis according to some in Asia and in Jamaica. Known to some as Beef Pizzle, it can be made into a broth, eaten on its own, or skewered and made into kebabs. The texture is said to be quite chewy but this Chinese delicacy supposedly acts as an aphrodisiac. In Jamaica they serve up Cow Cod Soup (cod meaning penis) – bull’s penis cooked with bananas, peppers and white rum broth.

In Japan a dish of fugu can cost hundreds of dollars. And it can also cost you your life. Since 2000, twenty-three people have died after eating the puffer fish. It’s so full of toxins that only licensed chefs are permitted to prepare it. Much of the insides of the fish must be discarded. Slice incorrectly, leaving the toxic parts in and fugu is said to be 200 times more deadly than cyanide. However, if you’re willing to take the risk, the taste is said to be excellent when served stewed, deep-fried or as sashimi with a bit of soy sauce.

In Cambodia they used to use tarantulas in traditional medicine. When the Khmer Rouge took control and starvation spread across the country, people turned to frying them and eating them. Most gave up when food supplies increased, but around the town of Skuon they remain a prized dish. One account rather confusingly describes the flavor as something between chicken and cod. The legs and head are supposed to be reasonably tasty, but the bulbous abdomen is full of brown bitter paste full of spider eggs, organs and excrement. Gordon Ramsey couldn’t handle that bit in the video.

Apologies to anyone who had one when they were little, but guinea pigs are a big favorite on the dinner table in parts of South America like Ecuador, Peru and Colombia. The delicacy originates in the Andes where the locals like to prepare them by roasting or grilling them. Guinea pigs are much-loved for their gamey flavor – despite the name, they don’t taste of pork – and as they take up little space to rear they’re becoming more popular – demand for beef means more forest will have to be cut down to create pasture land.

If eating a bull’s penis improves your libido then it only stands to reason that eating brains will make you more intelligent. Calf brain is a delicacy in plenty of cultures across the world. In France it’s cooked with beurre noir and turned into the dish known as cervelle de veau. In parts of America you can find fried calf brains sandwiches – or pork brains with scrambled eggs for breakfast, a dish that originated in Portugal where it’s considered the ideal way to start the day.