The Top 20 Attractions in Tianjin 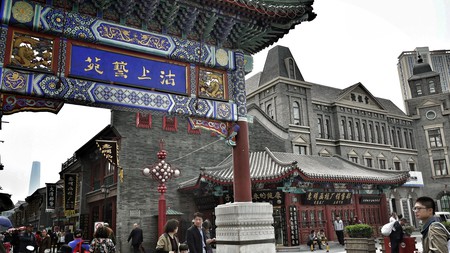 Tianjin has its own distinct character that makes it stand out from any other Chinese metropolis. Thousands of colonial buildings from the 19th and early 20th-century foreign powers, along with multiple relics from centuries of traditional Chinese culture, are either still intact or have been recreated. Tianjin is now a modern financial epicenter of China, considered one of the top cities in the nation. Here are the 20 attractions you can see from ancient times, yesteryear, and today that define Tianjin.

Memorial, Building
Facebook
Email
Twitter
Pinterest
Copy link
Share
Map View
The Century Clock is right off the Haihe River and is visible from the Tianjin Train Station. This will likely be the first, or last, Tianjin attraction you will see while visiting. Each zodiac sign is represented alongside a numeral.
Open In Google Maps
Hebei District Tianjin, China
Give us feedback

The most noted attraction in Tianjin, the Tianjin Eye is the only Ferris Wheel in the world to be atop a bridge. Lines don’t take too long, and the views are unrivaled. Make sure to go on a clear day.

The former Italian concession was revamped just last decade after generations of inactivity. Find authentic Italian food and cultural exports in this radiant town, along with other options in European fine dining, nightclubs, and boutique shops.

Hotel
Facebook
Email
Twitter
Pinterest
Copy link
Share
Map View
View Rooms
One of China’s most iconic hotels, The Astor has been rebuilt upon its original structure from the 1800s. Noted as a hotel that changed China, this hotel was once the site of major diplomatic activity during the Golden Age.
EVERYTHING YOU NEED TO KNOW

A skyline that is impossible to miss, Haihe Cultural Square illuminates incredibly well at night. Pass this backdrop while cruising down the river, and take a few photos along the way.

A beautiful place that I ignored yet. #Tianjin #haiheriver

Just recently reopened, the Minyuan Stadium once held sporting spectacles like major soccer matches in its heyday. Now it’s been repurposed as a cultural park, with many restaurants and shops lining the columns.

A highly unusual but captivating theme park, Binhai’s Theme Park is indeed aboard a former Soviet Union aircraft carrier. Every day there are attractions to catch, from motorcycle stunt artists to learning about naval artillery.

This graceful, natural park is spread out with plenty to occupy an afternoon. Rent a peddle boat, jog up and down its trails, or bring a picnic basket. Tianjin Water Park is the city’s premier eco-attraction.

A trip to the museum will make you appreciate Tianjin even more. Its history is rich, from recreations of the Second Opium War to ancient artifacts dating back thousands of years, will allow you to truly grasp the specialness of Tianjin.

#Repost @archdigest with @repostapp. A new book from #imagespublishing introduces us to 50 forward-thinking designers under 50, including Chicago-based studio @perkinswill, responsible for the Tianjin Museum seen here. Click the link in our bio for more. Photo by Todd Snapp/Crystal CG #archdigest #tianjinmuseum

A modern marvel in architecture, the St. Regis sits at the Haihe River and is one of the more fascinating hotels in China. Shaped in a cube, this is one sight to behold while in Tianjin.

Save your appetite and prepare to sample dozens of dishes at Nanshi Food Street. The length of a city block, this giant indoor mall hosts countless food vendors and cuisines, from local Tianjin specialties to international delights.

Shopping Mall
Facebook
Email
Twitter
Pinterest
Copy link
Share
Map View
Crafted by a French Architect the early 1900s, the Quanye Bazaar still flows with shoppers today. Its interior and exterior are preserved to allow you to have an authentic shopping experience in what once was Tianjin’s most popular shopping center.
Open In Google Maps
290 He Ping Lu, Jin Jie, Heping Qu Tianjin Shi, China
+862227303771
Visit Website
Give us feedback

Set to open next year, the Goldin Finance Center 117 is near completion. It stands as now the sixth tallest building in the world and dwarfs all other skyscrapers in town.

Tianjin’s most staple attraction is Ancient Culture Street. Reenacting the Qing Dynasty era, step back in time and engage with all kinds of peddlers, shops, and eateries, and absorb the feeling of what China once was.

Situated in the middle of a lake, Tianjin TV and Radio Tower used to be one of the tallest structures in the world. At the top is a revolving restaurant, and if you don’t mind the hefty price, it features a grand buffet. Incredible views from the observatory as well.

This European-inspired bridge is along the Haihe River, and is a beauty to cross. You’ll notice that the statues strongly resemble those you would find in Europe, which is befitting since Tianjin once was fully governed by multiple European colonies.

Huangya Pass at The Great Wall

If your stay in Tianjin lasts a few days, and you have one day to spare, Haungya Pass at the Great Wall is a must. Some parts are revamped for tourists, while others are completely rugged and seem untouched for centuries. Just make sure you are physically prepared.

Bricks in the wall

Xikai Church is the largest Catholic Cathedral in northern China. Built with Roman-French influence in its design, St. Joseph’s remains open today and holds sermons in both Chinese and English. The interior is well preserved with all the glory you’d expect to see from a historic European cathedral, only with a Chinese twist.

Among Tianjin’s first churches was Wangahailou, meaning “sea view tower.” The first church constructed by French colonists in the 1800s has had its fair share of history, both pleasant and tragic. At one point, this church is said to have been a major cause of the Boxer Rebellion.

Park
Facebook
Email
Twitter
Pinterest
Copy link
Share
Map View
Also known as Renmin Park (Mandarin for “people”) this natural attraction is regarded as the most peaceful, relaxing park in Tianjin by locals and tourists alike. People’s Park has just about everything you could expect from a classic Chinese outdoor park, from gazebos to pagodas.
Open In Google Maps
Hexi District, Tianjin Tianjin, China
Give us feedback
Give us feedback