ASIA
/
CHINA
/
TIANJIN
/
Things to Do

The Top 12 Things to See and Do in Tianjin 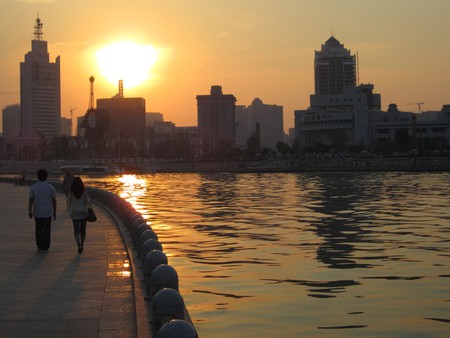 With a mix of Ancient Chinese and European influences from the past two centuries, Tianjin is a city where things to see and do vary widely. From visiting a 1,400-year-old section of China‘s Great Wall, to taking in neighborhoods where colonists of the last century lived, or browsing the exhibits of a futuristic museum, Tianjin is abound with activities. Take advantage of all there is to explore with our top 12 recommendations.

The symbolic river that runs through Tianjin is called the Haihe River. It spans 72 kilometers and has a total of 21 different bridges, each with their own distinctive design. Choose to board a cruise at night for the most magnificent views that will take you to the glimmering lights of Haihe Cultural Square. If your cruise is during the winter, then rest assured that you can stay warm inside the boat and peer through its glass ceilings.

Right atop the Haihe River on Yongle Bridge sits Tianjin’s signature Ferris Wheel, the Tianjin Eye. Considered the city’s number one attraction, the ride lasts 30 minutes and is best either on a clear, sunny day or night. From its peak, the panoramic views are nothing short of amazing. Bring your camera, and a date, and ride the eye.

Take a horse-drawn cart through the Five Great Avenues

Also referred to as ‘Wu Da Dao’ by locals, the Five Great Avenues are home to historic villas from Tianjin’s colonial past of the last two centuries. To see firsthand how colonists from Europe and other parts of the world lived in Tianjin, take a horse-drawn cart, or visit the Five Great Avenues’ prime museum with thousands of artefacts on display. 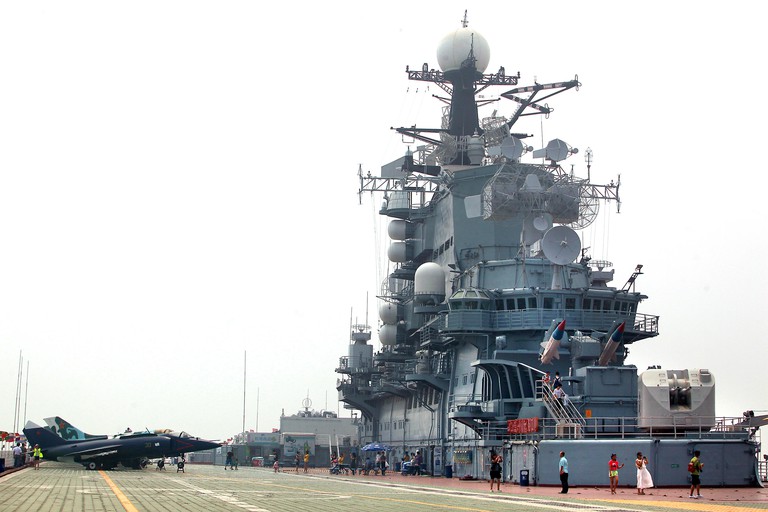 Binhai Aircraft Carrier Theme Park | © Stephen Shaver / UPI / Alamy Stock Photo
The eccentric attraction of Tianjin is undoubtedly this former Soviet Russian aircraft carrier that has been converted into a family-friendly tourist attraction for all ages, where you can watch stunt bike shows or ride theme park rides alongside cannons and heavy artillery. Binhai Aircraft Carrier Theme Park grows every year in annual visits too, and is quickly becoming a normal part of Tianjin tour itineraries. Tickets are ¥220 each ($30).

Have a laugh at the Mingliu Tea House

One essential thing to know about Tianjin’s culture is that it produced one of China’s favorite pastimes, cross-talk. Mingliu Tea House is Tianjin’s premiere chain of venues where you can catch this live comedic show of dueling orators, and hosts daily performances. Also known as the Celebrities’ Tea House, Mingliu has three locations to choose from, including a venue right on Ancient Culture Street. Be advised that the performance is entirely in Mandarin. Shows cost ¥80 ($12).

Tianjin’s best-known church from its golden age is the XiKai Catholic Church (also known as St. Joseph’s Cathedral) in downtown Tianjin. Erected in 1916 and still very much in use today with weekly masses in English and Chinese, its architecture harkens to Roman and French designs and is in the former French concessional area of Tianjin. XiKai is also northern China’s largest Catholic church and has been repaired and reconstructed various times throughout Tianjin’s drastic societal changes. 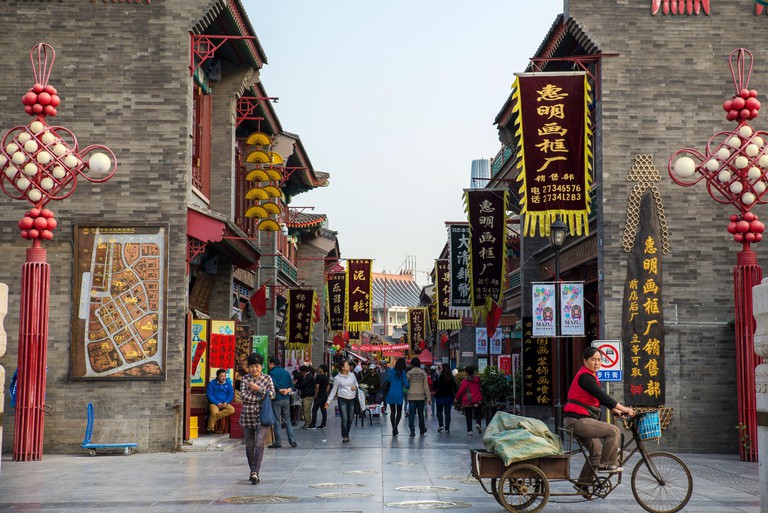 Ancient culture street, Tianjin, China, Asia | © Kate Hockenhull / robertharding / Alamy Stock Photo
The most touristy thing you can do in Tianjin is to visit this commercial replica of a Qing Dynasty era neighborhood. Though hundreds of vendors line the walking streets and countless souvenir shops await your attention, at the same time, this is a one of a kind nostalgic experience for travelers from outside China, and is not to be missed. Try traditional Tianjin snacks like ear-hole cake (a fried rice treat) and buy a silk outfit while you’re at it.

About an hour and a half outside of Tianjin is this fabled part of the Great Wall of China. Huangya Pass was a fortress built over 1,400 years ago that kept invaders at bay by isolating its bridge waterways, but there’s far more to see and learn. Visit Widow’s Peak and try your hardest to reach the top of this Wall’s highest point if you want to shoot the most epic photos. Just be careful though, as Huangya Pass is a tough climb. Tickets are ¥50 ($7) and opening hours are 8am-5.30pm.

Re-opened during the 2008 Beijing Olympics, Italian Style Town sought to introduce a new attraction by revamping the Italian concessional district and transforming it into a vivid tourist hub based around Marco Polo Square. In the Golden Age of Tianjin, this is where Italian colonists convened. Now it’s the site of numerous chic boutique restaurants and shops, some even owned or managed by Italian citizens.

See the Drum Tower of Tianjin

Whether you visit inside or just want to see it from afar, Tianjin’s Drum Tower is another signature landmark and overlooks an old-but-new neighborhood. Inside the tower are photographs and antiques that depict what the tower and its surrounding used to be like before modernization, while outside the tower there are plentiful shops for trinket shopping, as well as restaurants for dining.

If you’re a fan of history, be sure to take a trip to the Tianjin Museum, where you can learn more about how Tianjin came to be the cosmopolitan city is today, as well as the past of the Opium Wars, the treaty which permitted foreign nations to set up concessions in Tianjin, and more. The museum is home to many native and ancient history artefacts, and illustrations of the events that shaped Tianjin after the Chinese authorities finally took back its city completely. The museum building is fascinating, too.

Whether you’re an art amateur or already have an appreciation for Chinese paintings, you can learn more about the art that defines Chinese New Year at the Yangliuqing New Year Painting Museum. See firsthand how these paintings are made, and learn about their origins that date from the Ming Dynasty. Now you’ll understand the meaning behind all those pictures hung up on every door featuring chubby children holding fish during Spring Festival.