The Sculptures of Qing Qing: Between Memory and Metaphor 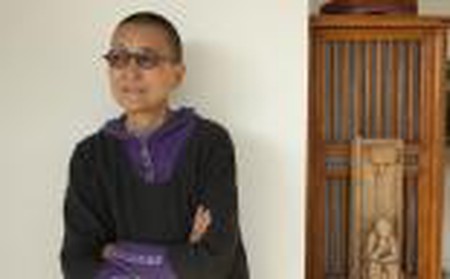 Chen Qing Qing known as Qing Qing) layers past and present in her surreal sculptural installations. Renown for her beautiful, ethereal imperial robes made of grass and hemp, she also creates diorama-like works inspired by her early love for Joseph Cornell’s magical box sculptures, and more recently she has branched out into fiberglass figurative sculpture. Culture Trip talks to Qing Qing in her Songzhuang studio near Beijing. 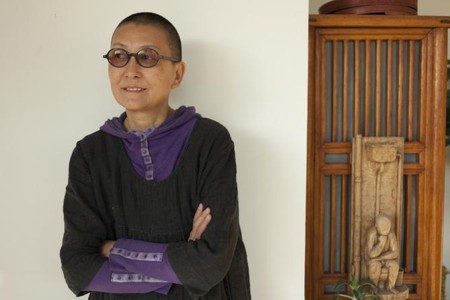 Qing Qing in her studio, image courtesy the artist and Red Gate Gallery

Memory and metaphor are everywhere in Qing Qing’s work – some of her own earliest recollections are of hearing the shouts of the Red Guards outside her parents’ courtyard home in Beijing, trembling with fear of what was to come. Today, she lives and works in a beautiful, tranquil house and studio (designed by an architect friend to her own specifications in a spiralling shape behind high walls) in the artistic enclave of Songzhuang, on Beijing’s outskirts. It is a treasure trove of her remarkable tableaux sculptures, and all the work she has completed since becoming a practising artist at the relatively late age of forty. 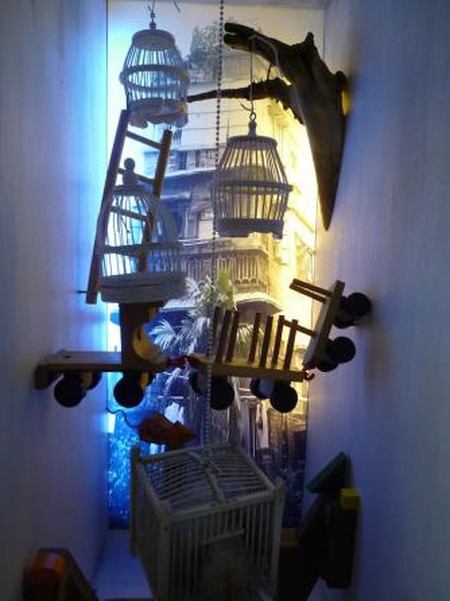 Qing Qing’s earlier life is like a capsule containing all the miseries and dramas of 20th century Chinese history. She remembers being in middle school at the start of the Cultural Revolution, when at the centre of every classroom a big collage of coloured paper with a red sun at the centre took pride of place, often with a portrait of Chairman Mao or one of Mao’s poems as its focal point. If you were late to school you had to stand in front of it by yourself and sing patriotic songs, with the entire class watching you. ‘Very shameful,’ says the artist. Later, Qing Qing and her mother were exiled to the countryside and her father was imprisoned. In one of her sculptures I spy an old black and white photograph of a pigtailed teenaged Qing Qing, driving a tractor. She became a barefoot doctor, studied traditional Chinese medicine, survived the traumatic deaths of her parents, and somehow ended up on the other side of the world, in Vienna, working as an executive for a global corporation. With the opening up of China she returned to her home city of Beijing, opened a hutong café as an intellectual, artistic salon, and then found her passion and metier as an artist. Qing Qing was one of the first artists to have a studio in 798, at a time when it was still a shabby rundown site of bankrupt factories and parking lots.

Looking back at the dramatic events and transformations that she experienced, the artist feels ownership of her world. “It is my life,” she says.

Her empty, transparent hemp robes, incorporating dried flowers and grasses, are exquisite creations suspended in Perspex box frames, evoking the Imperial past and all the generations of Chinese women imprisoned in various ways – from concubines and Imperial wives to rural peasant women – by the conventions and dictates of the times. Qing Qing uses hemp because it appears delicate and fragile but in fact is immensely tough and strong – ‘Like women,’ she says. ‘I choose this material because it can stretch, it is flexible, like the character of a woman. Women are not supposed to have power or express strength but they have more tenacity and more character than men.’ Referencing imperial robes worn by women in the Han, Ming and Qing Dynasties, she is also using hemp because it was used in ropes and in the floor coverings of traditional Chinese houses, and is a natural material redolent with history. 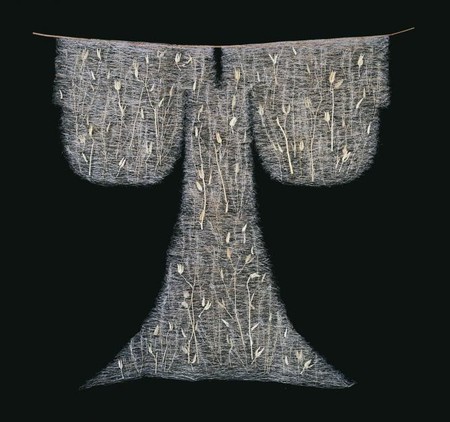 The significance of the robe is also a reflection on political symbolism. “Women in China, even today, but especially in the past, were placed in second position. Robes for women were not just a decoration but also expressed their place in the hierarchy and their social status. The importance of robes for women is very significant,” she says. Women can express themselves through their clothes, but sometimes the beautiful bride in the richly embroidered robes becomes merely an accessory to her powerful husband. Yes, even today, and not just in China, the artist laughs, acknowledging the contemporary image of the trophy wife. She worries that young women in China today are too prepared to swap their hard-won independence for marriage to a man with a “fat wallet.” Essentially, however, these works represent what Qing Qing sees as the essence of femininity: beauty and malleability, but also tensile strength and endurance.

An ongoing element in her practice is the creation of tiny, mysterious worlds enclosed in box-like forms. Sometimes they are like altars or Buddhist shrines, sometimes like a museum diorama or a Surrealist tableau. Sometimes they are beautiful, sometimes horrifying. They stem from the very first one she made, whilst still living in Vienna and reflecting on her Chinese past and identity from a position of exile. Of necessity it was simple and restrained, as she did not have access to many materials. This first body of work is entitled The Black Memory Series. An antique wooden box is lined by old book pages, with faded Chinese characters. A gilded pair of ears is pinned in place by multiple surgical clamps, a reflection, explains the artist, on her operation under acupuncture ‘anaesthesia’ carried out on a table during the darkest days of the Cultural Revolution. She has said, “Whenever I look at that scar…I cannot help but think of the rows of red flags waving along Sunflower Lake, revolutionary slogans pouring from high frequency loudspeakers. That is what I recall of my radiant girlhood.” 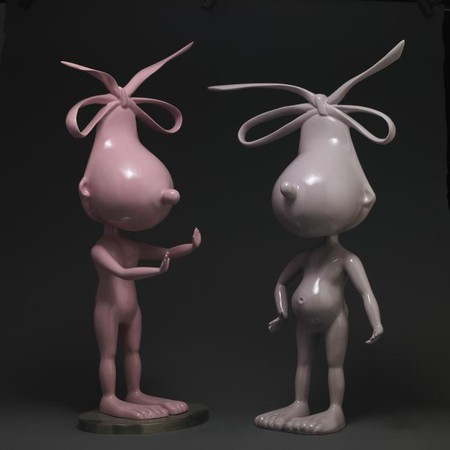 The rigidity and conformity of the Chinese education system is remembered in another work in this series, ‘The Great Epoch.” Wooden clothes pegs (to hold you rigid) and chicken bones are juxtaposed with a Mao medal symbolising the cult-like reverence afforded “The Great Helmsman” during her girlhood. “I used chicken bones (because) education instils ideas into your mind, whatever they give you, you have to take it. When I went to Europe I saw parents asking children, ‘What do you want to eat?’ I was very surprised! In China the parents put the food in your bowl. In Europe people are much more independent. The painting in the background is an ancient Chinese painting of herding the cows. The passage is about how to herd the cows and make them bend to your will.”

Another piece, “Story of Women,” recalls an operation at which the young barefoot doctor assisted. An old woman with bound feet had her necrotised toes amputated, a memory which fills the artist with horror even today. A hinged box like an antique “shadow box” for the display of treasures contains a tiny pair of red shoes, for bound “lotus feet.” The artist says, “To me, they represent such a horrific aspect of Chinese culture: absurd and distorted.” Qing Qing uses found objects – tiny dolls, toys, shells, twigs, flowers and bones – to express her thoughts about past and present in China and about her own life. She is interested in yin and yang, and Chinese classical stories about life and death and the traditions of Buddhism. Tiny allegories, they are at once personal and universal. 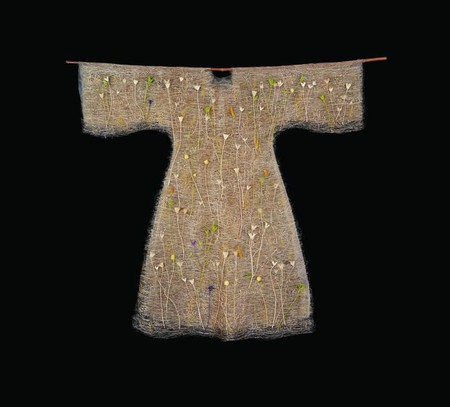 Her most recent sculptures, fiberglass figures of faceless child-like figures in baby pink, blue and pastel colours, are an interesting departure. The artist began to make these after a period of illness, and a time of regaining her strength and energy. She says they do not represent her, but asks me if I have perhaps noticed that each female figure has only one breast. They are not self-portraits, nor autobiographies, she stresses, but are a reflection on how Tai Ji is used to re-position bodily energy flow and ‘deal with things.’ Qing Qing muses about what she feels now about being female in China. ‘Young women today are much stronger in their character, they have more power and strength. It is very different than from the past, this power we have. No means no. We have learned to refuse, not to accept. And sometimes you have to push.’ She points to the figures entitled ‘No’ and ‘Pushing Hard’. Her figurative sculptures, like her diaphanous grass robes, possess a strength which is disguised by their aesthetic appeal.

The interview with Qing Qing took place in April 2014, in both English and Chinese, with a translator.