12 Up and Coming Chinese Video Artists

Video art is becoming an increasingly popular medium in China. Many internationally established Chinese artists, including pioneers of the medium, are embracing video art to express contemporary life. The following ten artists and the works profiled were all part of Now You See, an exhibition of young video artists from the collection of Dr. Michael I. Jacobs, who has been collecting Chinese video art in-depth since 2010. First featured at Whitebox in New York in May-June 2014, the exhibition was re-presented at Contemporary Istanbul in November 2014.

Chen Xiaoyun works with video, photography, installation and painting. His raw and direct works have a poetic quality, with a narrative structure rich in introspective thinking and fragments of consciousness. Chen manipulates our perception of the world, creating a viewpoint that is more ridiculous, hesitant and vain. Drag (2006) depicts a shirtless man pulling a rope, in a struggle with an invisible ‘other’ hidden from view in the darkened room, his shadow wearing a pointed hat and appearing on the wall in a revelation of who the actual opponent really is: an invisible inner force. 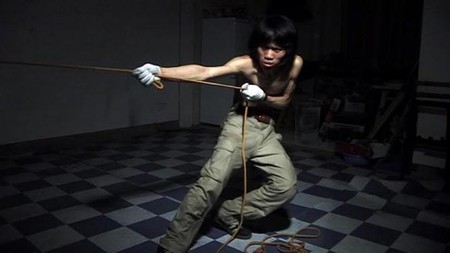 Cheng Ran’s work is informed by late 20th century art house cinema and captures the life experience of China’s youth in an era of cultural globalization. Cheng integrates performative elements, the visuals of electronica and rock’n’roll music and, at times, the aesthetics of Chinese ink painting. Simply Wild (2014) reaches out to a girl he loved and lost, combining Super-8 film with the internet’s dematerialized technology to articulate the emptiness of loss. The Sorrows of Young Werther (2009) borrows its title from a sensitive young artist’s tragic love story written by Goethe in 1774. A surreal, dreamlike sequence of images are shot in a forest at night, with interspersed bursts of color and a haunting soundtrack of music performed by a Chinese musician and DJ. In Rock Dove (2009) a cluster of homing pigeons inside an old factory are startled into a flying frenzy by fluorescent lights suddenly turning on. The video evokes technology’s disruption of nature, as well as the threat to order caused by sudden dramatic change. 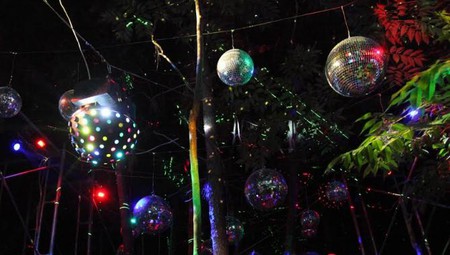 Hu Xiaoyuan’s drawings, objects, installations and video works touch on questions of human existence in a subtle and intimate way. While for her installations and objects Hu uses organic objects and materials, in her videos she relies on ‘diluted temporality’, ‘optical illusion’ and ‘seamlessness’, creating semi-abstract works. No Reason Why (2010) is a floor projection of what appears to be a bug squirming in a box on top of a table. Sounds of a body’s movements and a person’s wheezing reveal the shape as an actual person wrapped tight in white cloth emerges, resembling a cocoon. The effort of the performer is apparent, the sounds echoing the struggles to move forward. The video stands as a gesture of struggle and hopelessness, suggesting the futility of life. 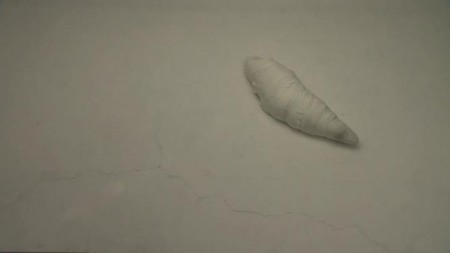 Jiang Zhi’s multidisciplinary practice engages with themes of body language, femininity, light, whiteness and theatricality. At the intersection of poetry and sociology, Jiang’s open-ended works weave familiar and mundane social experiences together, addressing aspects of China’s modern society and the alienation it has produced. 0.7% Salt (2009) addresses the politics of watching: movie star Gillian Chung gazes at the camera until her professional demeanor gradually breaks down into a distressed emotional state and she quietly begins to cry. Fly, Fly (1997) is shot with a performative approach: holding the camera in his right hand, he films his left arm flapping like the wings of a bird while moving around his cramped apartment in Beijing. The soundtrack, from Massenet’s opera ‘Tais’, evokes a parallel world, suggesting the possibility of transcending the confines of the room. The artist asks: “can we shake off the heaviness for lightness? In which direction shall we choose to fly?”

Kan Xuan is best known for her video works, but also works with painting, performance, photography and installation. Kan highlights the rarely noticed emotions of the everyday and treats video like a diary to record everyday experiences objectively. For her, simplicity – at the core of her practice – equals ‘freedom’, while directness is a vehicle for understanding life. Jumping Taste (2011) is an animation of a photograph taken of the head of a traditionally dressed Chinese woman, framed by a grid of circles against a red background. She appears to be mouthing the word ‘hot’ and a sequence of nonsensical staccato sounds. References to traditional political Chinese graphic design and contemporary advertising come forth through the use of the red grid, which in the video is invested with a new function: the animation subverts the conventions of propaganda and advertising, creating a new space for the expression of an independent artistic voice. 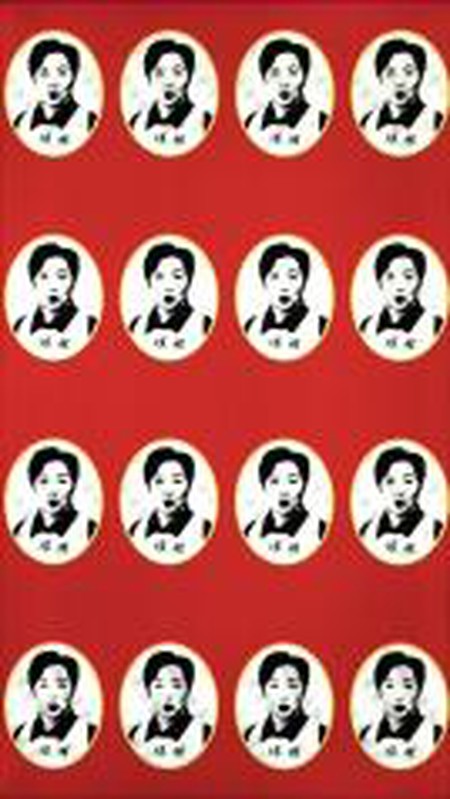 Liang Yue’s photographic and video works deal obliquely with the rapid pace of change in contemporary China. She captures scenes from everyday life as well as the eternity of nature, ultimately treating ‘the meaningless’ as the ultimate significance of her creation. Her works are often explorations of the inner landscape, glimpses of feeling and emotions immersed in a private, quiet world. Stop Dazing (2004) is poetic study of light and an intimate portrait of an inner world. The narrative unfolds in a sequence of memories, dream states and imaginative scenes not located in any specific time. Moving through the Chinese metropolis – Shanghai – the footage is interspersed with children’s drawings, text and photographs. 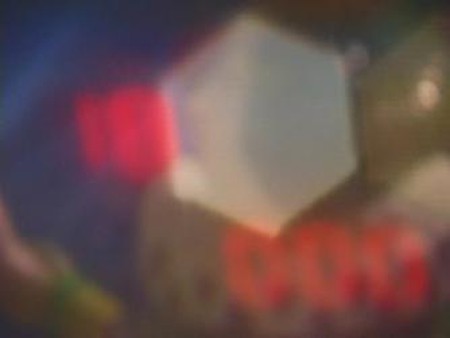 Li Ming’s experimental videos usually originate from a certain image, word, action or atmosphere that provokes his interest.In Swordsman – HA-HA-HA-HA (2011), Li uses strategies of 1970s performance and land art to explore the consequences of large-scale land development on the local community, and the excesses of corporate and state power. An amplified loud-hailer in a half-demolished building broadcasts echoing sounds that suggest the potential social threats of the dismantling process. Comb (2008) also addresses land development: a bulldozer in the process of demolishing a house reaches into a room where a woman is sitting, as if to caress her. The machine’s ambiguous gesture, in an almost human desire to connect to others, still points to the potential destruction of human life – the woman. 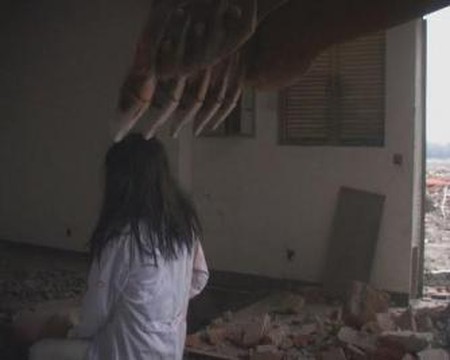 Shiyuan Liu creates photographic and video installations which at times include a performative element. Interested in how viewers perceive her work and make conceptual and psychological connections to her images, Liu has recently been focusing on themes of beauty and the values of sentiment. Evidence (2009) explores and examines the uncertainty innate to close relationships through a performance-based initiative. Liu invited a group of friends to a party in her studio and asked them to bring items of clothing, to which she attached a number tag. Individuals would pick a number and try on the corresponding item. Each person also chose a number to which Liu assigned an action associated with that person’s character and they then acted out each one. 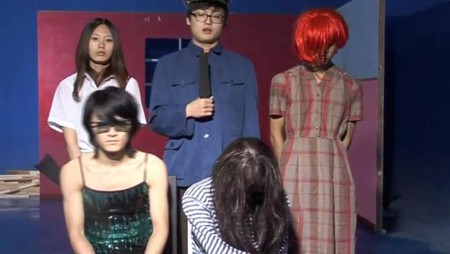 Sun Xun’s socially and politically engaged moral tales juxtapose surrealistic and recognizable images made with colour powder, woodcuts and traditional ink. His video animations, often presented in an immersive setting, act as a ‘theatre of memory’ merging reality and fantasy, time and history. In Beyond-ism (2010) insects crawl over the text of Snow, a 1936 Liberation Army poem about Mao’s ambition to unify and lead China, while a magician stands as a figure of wisdom. The insects obliterating the light on screen at the end question the ideological history of China and its potential future. People’s Republic of Zoo (2009), inspired by George Orwell’s Animal Farm (1945), presents a lyrical, yet menacing narrative with a bestiary of animal characters, while Heroes No Longer (2008) depicts a dark, uncertain future, where heroes are no longer victors and past utopian socialist ideals have evaporated. The failure of revolution and its negative consequences, deeply ingrained in people’s psyche, are the implications in Some Actions that Haven’t been Defined in the Revolution (2011). 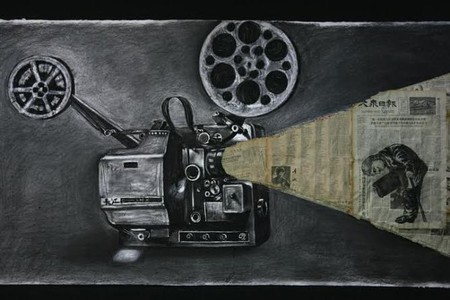 Wang Xin creates interactive and multimedia installation, moving images and new media works that rely on keywords such as ‘unconsciousness’, ‘art world system’, and ‘post-human’. Her oeuvre draws from her interest in exploring and expressing the many layers of the human subconscious. Diffraction: Objects (2010) is a study of sculptural forms, through the artist’s performative interaction with a wide array of found objects, including a music box, old photographs, pebbles, Scrabble letters and a large pine cone. Wang assembles and disassembles the objects on a table, at times placing them under closer examination with a magnifying glass. The video draws attention to the artist’s creative process of finding, looking, collecting and examining. 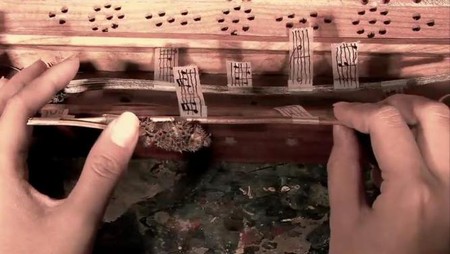 Not one to confine his work to a single discipline, Alan Kwong crosses mediums to explore experimental forms of spacial storytelling as well as interactive experiences facilitated by immersive technologies. He describes himself as an artist, designer, and technologist. But in Words After (2016), he recreates his frustrations of being unable to express himself verbally through video installation art. The footage was filmed by a camera that had been attached to his glasses, and was then visually stuttered to reflect his internal anxieties over his speech impediment.

In a collaborative exhibition supported by Pearl Lam Galleries, Kenny Wong examines the emotional connections individuals have to technologies. Movement is represented through digital mediums. For instance, in his video installation series, the Last Walk on Thirteen Streets (2016), a man is depicted walking down stairs on several separate screens, creating the impression of him endlessly walking down a never-ending staircase.