The Most Beautiful Temples in Beijing 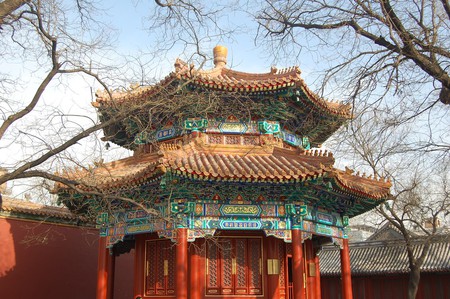 In Beijing, Yonghegong Lama Temple is undoubtedly one of the most beautiful temples.It was originally built for the Yongzheng Emperor in Qing Dynasty while still a prince. After Yongzheng acended to the throne, his former estate was transformed into a Tibetan Buddhist Temple. That’s why the architecture in the temple looks so grand, even luxurious — and incompatible with its identity. The temple covers an area of one hundred acres and has over one thousand halls and monk’s cells. While appreciating the valuable thangkas and statues of Buddha in Yonghegong, you may still bump into some monks living there. 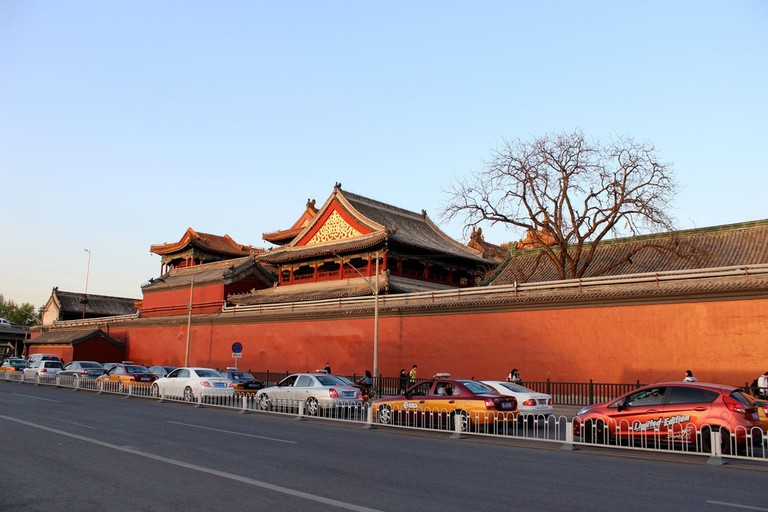 Monastery
Facebook
Email
Twitter
Pinterest
Copy link
Share
Map View
There are few people in China who don’t know about the Bai Yun Guan. The Taoist temple boasts a history of over a thousand years. Originally the Tian Chang Temple in Tang Dynasty (618 – 908 C.E.), it was renamed Bai Yun Guan in the early Yuan Dynasty (1271 – 1368 C.E.) and given to Taoist priest Qiu Chuji as a gift. Qiu is respected for his trip to the Western Regions to persuade Genghis Khan from slaughtering more innocent people and is more widely known in China as an upright Kong Fu master in Jin Yong’s wuxia novels. Tourists in the temple have two rituals for good luck: One is to toss coins through the center of the giant ancient coin hanging under the Wofeng Bridge; another is to touch the stone monkey in the temple.
Open In Google Maps
9 Bai Yun Guan Jie, Xicheng Qu Beijing Shi, China
+861063463531
Give us feedback 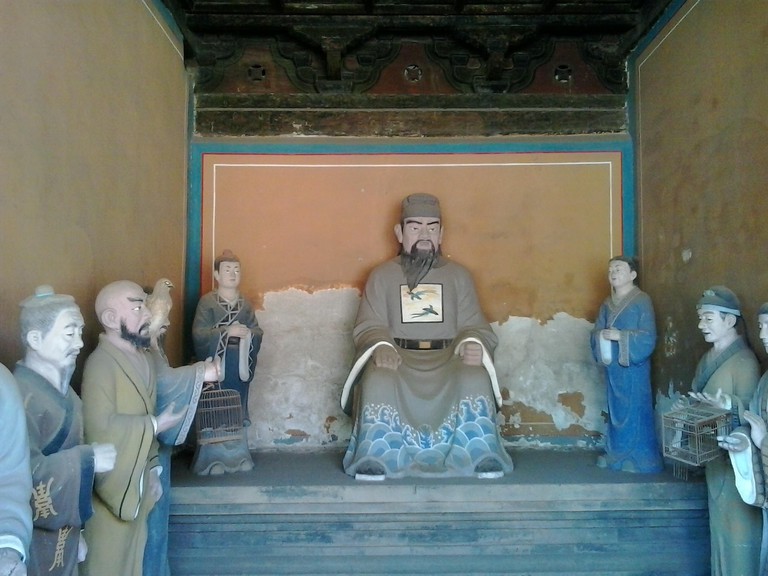 Dongyue Temple probably has more gods than any other temple in Beijing. It serves over 3,000 Chinese gods, from the most prestigious Jade Emperor, the emperor in heaven, and Dongyue, the god for the Tai Mountain (also known as Dongyue, the East Mountain of the Five Mountains in China) to inferior gods like the god of builders and contractors, Lu Ban. Dongyue Temple is also known for the more than one hundred stone tablets in its yards, especially the Zhang Gong Tablet by Zhao Mengfu, one of the four famous calligraphy masters in Chinese history.

Southern Beijing has several old temples that are several hundred years old, and Tianning Temple, which can be dated back to the North Wei Dynasty (386 – 534 C.E.), is among the oldest of them all. Before entering into the temple, you’ll be impressed by its thirteen-story pagoda. The reliefs of Buddha on the two sides of the pagoda’s gate are so vivid that you have to be careful not to be intimidated by them when passing by. There’s a legend that the sunlight can go through the gate of the Dashi Hall in the temple every midday, even though the gate is tightly shut, and, at this time, the shadow of the Tianning Pagoda appears inside the hall. It is said that people who see this scene could live to be a hundred years old. 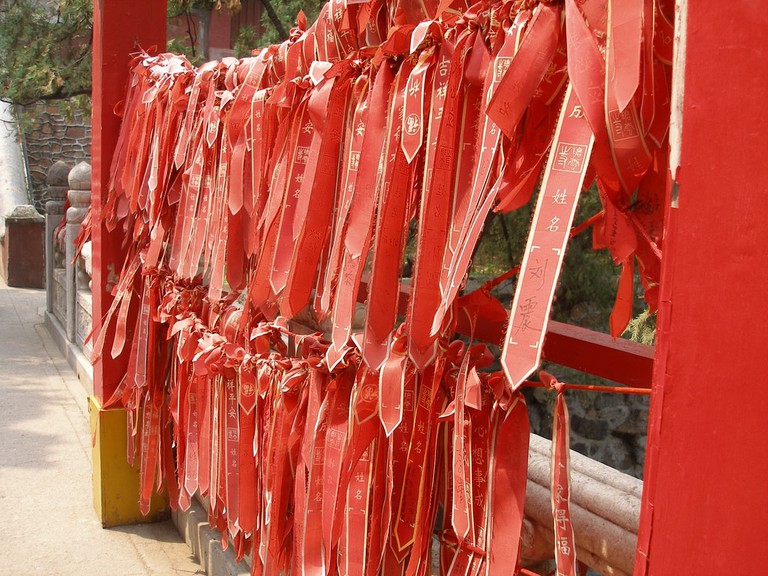 Green Cloud Temple | © politizer / Flickr
The temple was built in Jin Dynasty (1115 – 1234 C.E.) and was refurbished in Ming Dynasty (1368 – 1644 C.E.) in a failed attempt by a eunuch to occupy it as his grave. In 1748, under the reign of the Qianlong Emperor of Qing Dynasty, the temple compound was extended. Although most of the temples in the west mountain area were destroyed during wars, the Bi Yun Temple is fortunately well preserved. The temple is also known as the temporary home of Sun Yat-sen’s coffin shortly after he died from liver cancer in 1925, before he was moved to the Mausoleum of Dr. Sun Yat-sen in Nanjing in 1929.
Open In Google Maps
Haidian District Beijing, China
+861084371700
Give us feedback

Buddhist Temple
Facebook
Email
Twitter
Pinterest
Copy link
Share
Map View
The 1,400-year-old Fayuan Temple is the home to the Buddhist Academy of China and the China Buddhist Literature and Heritage Museum. Known for its gorgeous crabapple and lilac flowers, the temple has been welcoming flower viewers since the Qing Dynasty. The lilac flowers in Fayuan Temple are so famous that poets Xu Zhimo and Tagore together paid a special trip to view the lilacs there in 1924.
Open In Google Maps
7 Fa Yuan Si Qian Jie, Xicheng Qu Beijing Shi, China
+861063534171
Give us feedback 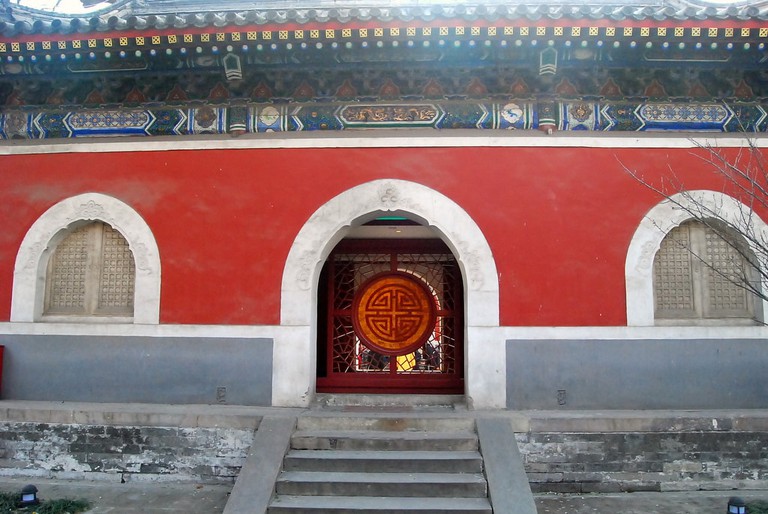 Wanshou Temple | © shizhao / Flickr
The Wanshou Temple is dubbed by Beijingers as “Little Forbidden City” due to its grand space and close relationship with the royal families. It was built by the Shenzong Emperor in Ming Dynasty to celebrate his mother’s birthday. In Qing Dynasty, the Qianlong Emperor celebrated his mother’s birthday three times in the temple and ordered architects to expand the compound using the elements from the Old Summer Palace. Guests can even enjoy a boat trip on the same route as the Empress Dowager from the Wanshou Temple to the Summer Palace.
Open In Google Maps
Zizhu Bridge, Haidian District Beijing, China
+861068456997
Give us feedback
Give us feedback