Enter the world of Avatar (2009) at Wulingyuan Scenic Area in northern Zhangjiajie. The magical landscape was the inspiration behind the Hallelujah Mountains in James Cameron’s sci-fi epic, and you can see why.

The stunning rigid landscape of Wulingyuan looks like something straight from an extraterrestrial world, with more than 3,000 sandstone pillars piercing the looming mist. Some of the colossal stone peaks are taller than 210 metres (660 feet), and the UNESCO World Heritage Site accommodates endless ravines, gorges, pools, lakes, rivers and around 40 caves – making it a truly incredible natural phenomenon. 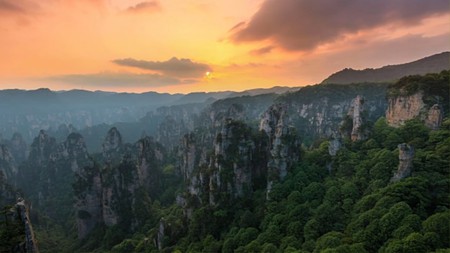 Wulingyuan is one of the many beautiful national parks in China, but it has its own unique charm. Possibly the most remarkable parts of the the park are the two natural bridges. One is Tianqiashengkong (the bridge across the sky); stretching 40 meters across the valley, 357 meters above the ground, this natural overpass is one of the highest of its kind. The other is the Xianren Bridge (the bridge of immortals).

The highest peak in the park is the Tianzi Mountain which can be reached by several different methods. There’s a cable car you can ride through the landscape, or if you’re feeling adventurous there’s the 3,878-step stairway up to the top. However, the most breathtaking way you can travel up is in the tallest outdoor lift in the world – the Bailong (Hundred Dragons) Elevator, which takes up to 50 people to the top in less than two minutes.

The early founder of the Han Dynasty, Zhang Liang, lived in these mountains in seclusion after becoming a fugitive for attempting to assassinate the Qin emperor Qin Shi Huan around 220 BC.

The area is also referenced throughout Chinese literature and artwork, most famously by Liu Zongyuan, a renowned Chinese writer of the Tang Dynasty (618-906CE).