The Last Blade Sharpeners in Beijing 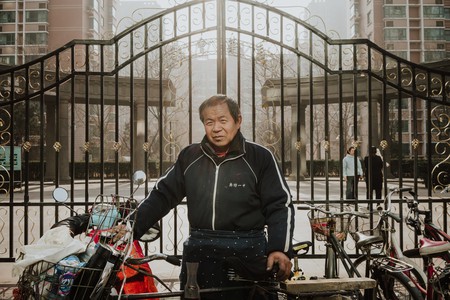 As Beijing’s landscape has grown upwards and outwards, much has been drowned out, swallowed up and forgotten. But the haunting call of the roving blade sharpeners endures, reminding Beijingers of the city that once existed. 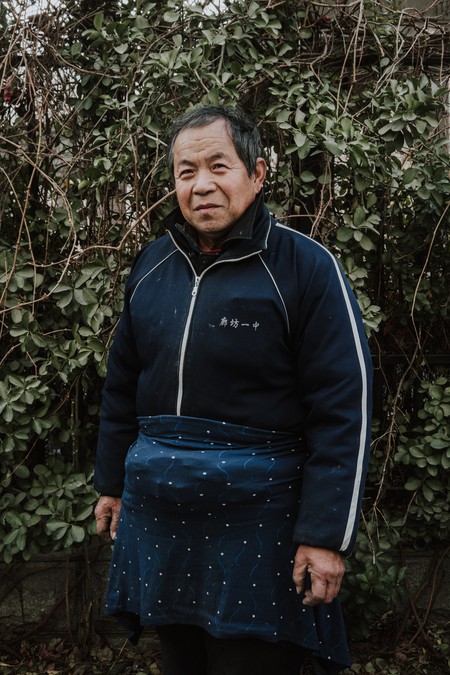 The blade sharpener has come. While everyone else hustles by – delivery guys on mopeds, people running to catch the bus – this particular man couldn’t seem more at ease. With languid pushes on the peddles of a bike that looks to be from the Qing dynasty, he is not going anywhere fast. He must move slowly, in fact; it is a requirement of the job. Customers need time to reach him – time to grab their scissors and kitchen cleavers, put on a jacket, catch the elevator, exit the community gate and get to the street.

Pedalling is an afterthought, really, because he is more focussed on his call, one ingrained in the collective memory of all Chinese people. The sound can cover an entire block, long and echoing, pulling people from their homes to come and find the source.

The call is unmistakable. With the vowels so drawn out, what the peddlers are actually hawking can be hard to discern. Nonetheless, the melody is hypnotic; especially the long, low vowels as they echo through the cavernous city alleyways. 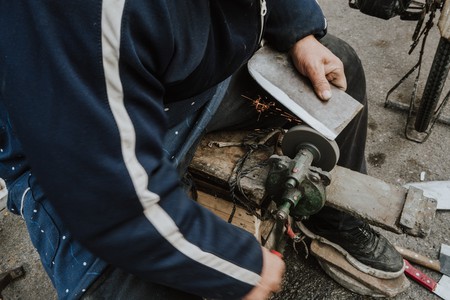 The soundscape of Old Beijing

Perhaps some of the call’s allure is that it is an echo from the past. It was integral to the soundscape of Old Beijing, where street peddlers were more commonplace. But in recent decades these voices have faded, or been drowned out as this expansive capital continues to build up, out and beyond that former lifestyle.

In popular imagination, Old Beijing is equated with the hutong. Much has been written about the demolition of these grey winding alleyways, and about the dismantling of the siheyuan, the classic courtyard-centric homes that lined them. Much less has been written about the street vendors who were integral to daily life in the hutongs. Their voices were the heartbeat of those streets, ingrained in the community consciousness.

In a master’s thesis work from 1936 titled Calls, Sounds and Merchandise of the Peking Street Peddlers, author Samuel Victor Constant documented over 50 types of peddler. These included street-stall vendors who sold a fantastic buffet of snacks from fried crullers and melon seeds to bean cakes, as well as roving peddlers who sold services and entertainment – the feet fixer, the blade sharpener and the fortune teller. Of these peddlers, few remain in Beijing today. The blade sharpeners, usually men in their 60s or 70s, are some of the few who are left. 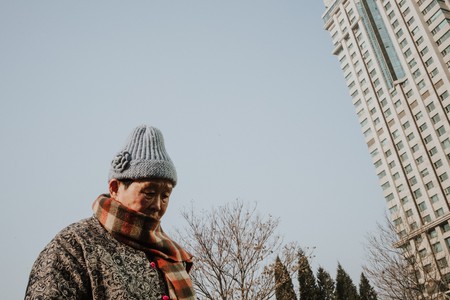 A lifetime of work

“No, no one wants to pick up this line of work – and why would they?” says Uncle Miao, his preferred form of address. He has sidled over to an available patch of pavement, as a woman has come down to get a dull pair of scissors sharpened. His rusty bike is parked at the side of the road; with some effort, he removes his wooden toolbox from the back.

The toolbox doubles as a work bench. There is a small, well-worn pillow attached there; a dark blue pattern with tiny, light-coloured peonies. The floral print contrasts with the rest of Uncle Miao’s appearance. He hunches over the blade and grindstone, painting water on the blade to moisten the metal.

Perched in a low squat on the bench, which he constructed himself, he continues. “It’s hard work and you don’t make a lot of money. Nowadays, if you picked up something like this it would be considered a bad thing, since there are no prospects.”

Uncle Miao is 72 years old. His voice and facial expressions are animated, his hands work quickly and nimbly. But his shoulders are bowed, and there’s not a single tooth in his mouth. He says he consumes only liquid. But what happens if the broth is thick? Standing up, he does a demonstration, tilting his head back as he bounces lightly on his knees to push it back.

Uncle Miao learned how to sharpen blades from his father, who traversed the Shandong mountains and hills to come to Beijing and ply his trade. He remembers when his father would be called upon by local bandits to sharpen their knives – outlaws who would lie in wait in the crevices of mountainous Shandong. Learning the techniques of how to angle the blades and how to assess the value of a knife came quickly to 18-year-old Miao. 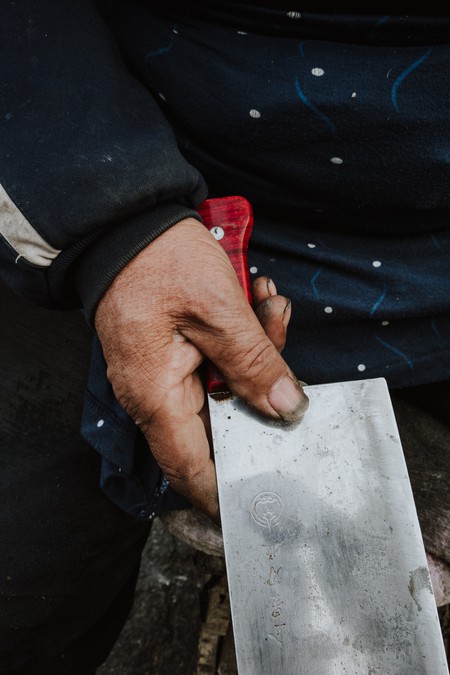 With over half a century in his profession, he has been at this work for some time. By his own account, the work has changed very little, although the city around him has changed dramatically. Miao remembers when there was no Beijing outside the second ring road, meaning that residences and businesses didn’t stray too far from the walls of the Forbidden City. Now Beijing has spread and sprawled out to an unwieldy six rings.

“Back then it was all bicycles, no cars. It was easier to get around, in a way. Nowadays I’m on this old thing” – he juts a thick finger towards his bike – “and people get irritated with you on the road.”

Miao’s line of work has made him a keen observer of the dramatic changes taking place in the city. In the mid-1980s, Beijing was home to at most nine million residents; today, that figure is about 21 million. If there were cars back then, they chauffeured high-ranking government officials. A handful of Soviet models, or sleek, black Hongqi (red flag) cars dotted the roads and would have had plenty of room to manoeuvre, if it weren’t for all the bikes. 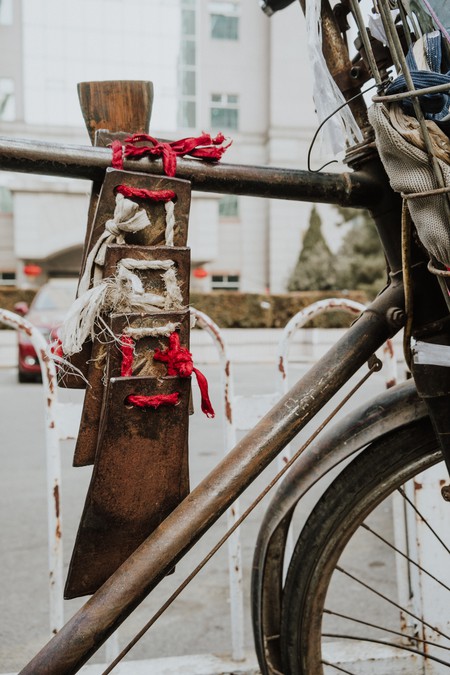 Freedom of the open road

Big Li has parked his bike and laid out two butcher knives on the pavement; this is how he lets passersby know he is open for business. He riffles through his toolbox, checking his handful of tools.

“The best part of the job? Freedom. Your schedule is yours. If I want to work, then I do; if I don’t want to work, I can take a break for a little while. That’s the good thing about this job: freedom. And you can make a lot of friends; it’s very social work.”

‘Big Grandpa Li’ is the name he uses on his WeChat account, but at only 62 years old, he is young compared to his counterparts. “I first started this work when I got laid off from a metalwork factory, in the 1980s. We had been making knives and scissors, so I had some grasp of what [scissors and knives] were about. When I started I’d make about three yuan a day. Hey, that was a lot of money back then! When a mantou [steamed bread bun] was about five cents, if you were making three yuan a day you were doing pretty good.”

Big Li, with thick fingers stained grey from working with metal, takes a small pristine glass vial from his well-used smock. Carefully pinching fingertips to remove the cork top, he lays out the loose tobacco leaves onto a bed of cigarette paper.

“Nowadays, people baulk when you tell them it’s 10 yuan to sharpen a pair of scissors. When you could buy a new one for a little more than that, why bother sharpening an old pair? I know the math.”

A young couple holding hands stop to take pictures with their phones and chat with Big Li. A couple of older men also linger, lighting up cigarettes of their own. The men start to reminisce, remembering when they were kids and would race to see who could find the blade sharpener first. 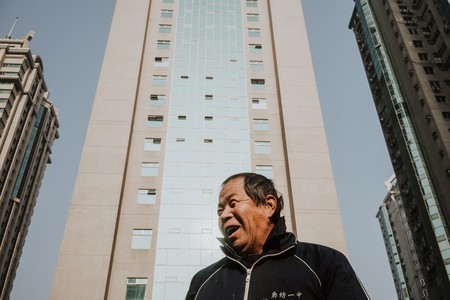 A race to reach the blade sharpener

“We all lived in the same alley, so we’d all play together when we were young.” One of the guys gestures a circle with his hand, the smoke trailing. “Once we’d hear the blade sharpener’s song – boom, we’d start running. We’d have a race to see who could get to him first. There were different routes and shortcuts you could take, and you’d have to train your ear to figure out which direction his call was coming from.” He cocks his head, moving his ears around as if tuning into a signal. Big Li grins quietly, nods and looks down.

The group has been loitering too long in front of an apartment-leasing storefront. “Excuse me, can we help you with anything?” asks the real-estate agent. It’s a polite suggestion to shove off. Big Li nods his head, “Yes, I’m just finishing this blade and then heading out, sorry.”

The customer hands Big Li a couple of folded bills, and he at first waves an upright palm, saying, “No, no, that’s too much.” They go back and forth like this, a classic Chinese dance of niceties. This way, the giver looks more generous and the receiver seems humble.

The real-estate agent opens the door again, leaving it ajar and standing in the doorway. “Off we go…” Big Li says, as he puts one foot on a bike pedal, giving the bike a push with the other leg. “Next time, then!” he calls back to the group, who have dispersed. They return to their original trajectories.

Big Li gives a couple of careless pedals, picking up some momentum. Hands on handlebars, he cruises down the block, glancing around for traffic. With an inhale, he lets out a long call, hawking his service. Riding away, his voice is absorbed by the skyscrapers and covered by the sounds of traffic. 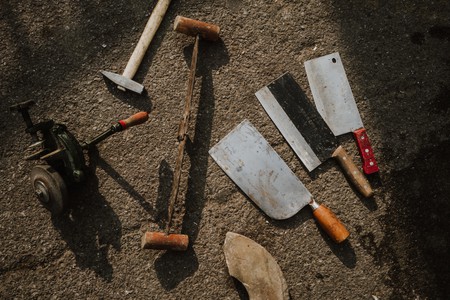