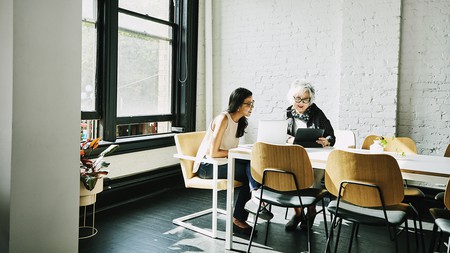 The worldwide travel ban during the coronavirus pandemic has sparked a surge in people learning new languages, according to a Culture Trip survey. In China, they’re focusing on French, English and Japanese. And if you’re wanting to learn Korean, there’s a boy band for that – as K-pop sensations BTS launch their own language app.

Lockdown, it seems, is time to get round to doing all those things we’re normally too busy to do – and for many of us that means learning a language, or improving our conversation skills. At Culture Trip, we examined search terms from Google as well as Chinese search engine Baidu and used them as a proxy for intent. It threw up some really interesting data.

Meanwhile, the language learning app Duolingo announced a 200% increase in test-taking activity month on month (February-March), with the number of its active users in China doubling over the same period.

Search for hotels – and learn the lingo 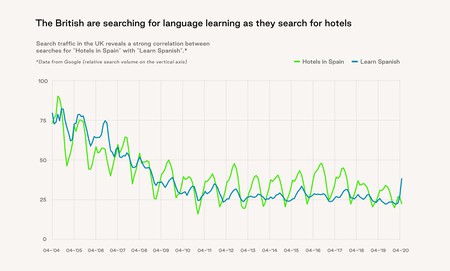 When mapped against hotel searches, there is a strong correlation between learning a language and interest in travel. For example, people in the UK search for hotels in Spain at the same time as searching how to learn Spanish. Spain is the top destination for UK travellers. Looking at data from the United States over a five-year period, Americans started learning Spanish 11 weeks almost to the day after they had booked a hotel in Mexico. 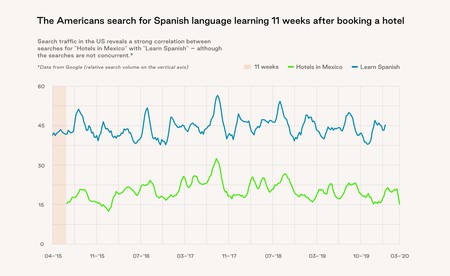 China was the first country to restrict people’s movement, and that prompted a significant increase in people attempting to learn French, Japanese and English – languages spoken in three of the top 10 countries visited by Chinese tourists. 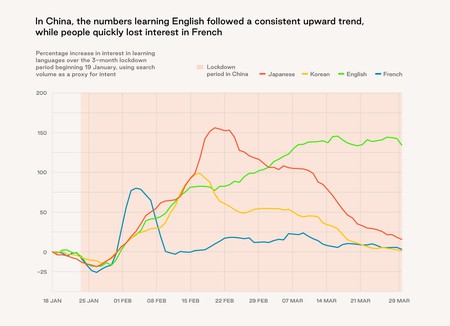 After a month of the travel ban, which began on 19 January, the number of searches on how to learn Japanese rose by more than 150 per cent. Interest in learning English also rose by 150 per cent over a two-month period.

The data shows that interest in learning Japanese peaked after a month and then started to decline, while English surfed a steady upward trend in search volume. There was an initial burst of interest in learning French, which saw a nearly 100 per cent jump in searches, before plummeting to almost to zero after two weeks.

It is a similar story in the western hemisphere – both the United States and the United Kingdom have seen a significant increase in language learning, coinciding with the first stay-at-home orders. In the UK, the number of searches relating to learning French and Spanish from March 10 (when lockdown was announced) to March 24 shot up by 150 per cent and 200 per cent respectively.

Americans have shown a keen interest in learning Chinese and Korean, with 200 per cent growth in searches for both languages in the period from March 10-24.

The rapid rise in people learning Korean coincided with K-pop megastars BTS launching a language app that month. With 24m followers on Instagram, the boy band are a global phenomenon and many of their fans had asked for them to subtitle their videos. They launched their app as a response.

There is no sign of the travel ban letting up any time soon. However, being stuck at home has in some cases been the catalyst for travellers to learn the language of the country they planned to visit. Take Londoner Ana Pavuna, who had to put her trip to Japan on ice; she has started learning Japanese in the hope of visiting in September. 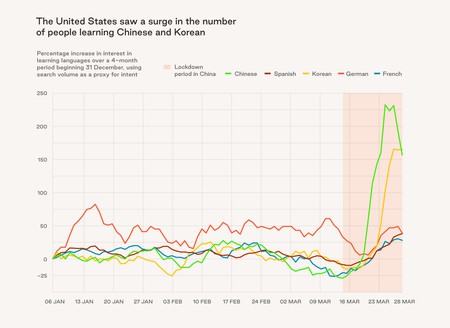 “Since the lockdown, lots of teachers on YouTube and Instagram have become more proactive. Some now do conference calls in which they answer students’ questions,” she says. “Others post content much more regularly and do live video events.”

Still, being able to speak the language is key to a more enriching travel experience, unlocking adventures and encounters that would otherwise be out of reach, as seasoned travel writer Mike MacEacheran attests. “I’d arrived at Samye monastery in Tibet at dusk to find the gates locked for the night,” he says. “A few from-the-pocket phrases to the on-duty doorman that I’d picked up while in Lhasa – ‘Any food?’, ‘A room, please?’ – saw the doors swing open into a heavenly, sanctuary-like courtyard.”