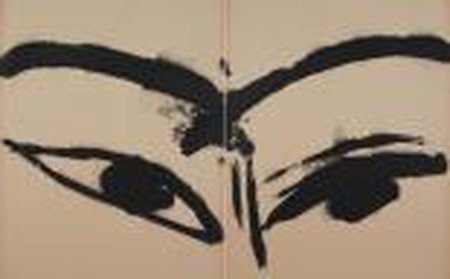 In the 20th century, China underwent massive political upheavals that transformed the country’s cultural landscape; these events however, also spurred an unprecedented international exchange of cultures as Chinese intellectuals and artists looked to the West as a bastion of modernization. 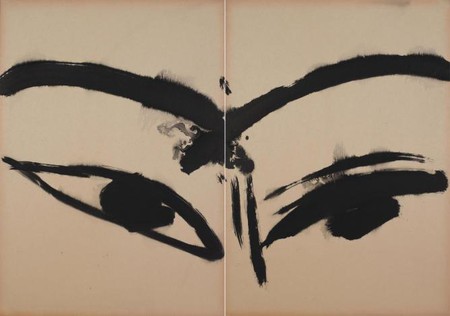 May 2013 saw a flurry of excitement in the world of Asian art, as Chinese artist Zhang Daqian usurped Picasso as the top seller in the international art market, with an astounding $550 million in sales. This wasn’t the first run in between the two modern masters; in 1956, Zhang Daqian and Pablo Picasso met at Picasso’s ‘La Californie’ mansion in Cannes during Zhang’s first visit to Paris for a celebrated exhibition at the Musée Cernuschi, Paris’ museum of the Asian Arts. In honour of this historic exchange, we have selected seven artists who have integrated traditional Chinese painting techniques with a Western language of representation.

One such artist to approach traditional ink brush painting with an experimental eye is Zhang Daqian. An undisputed master of manipulating ink, Zhang moved effortlessly between the orthodox and unorthodox. Zhang’s ‘splashed colour (潑彩) paintings have proven particularly popular amongst contemporary collectors for their break from traditional landscape paintings and allusions to European Abstract Expressionism. His prodigious talent and meticulous attention to detail is abundantly visible in his numerous forgeries of Chinese classics, which have beguiled and bewildered art connoisseurs for their being almost impossible to distinguish from the ‘real’. 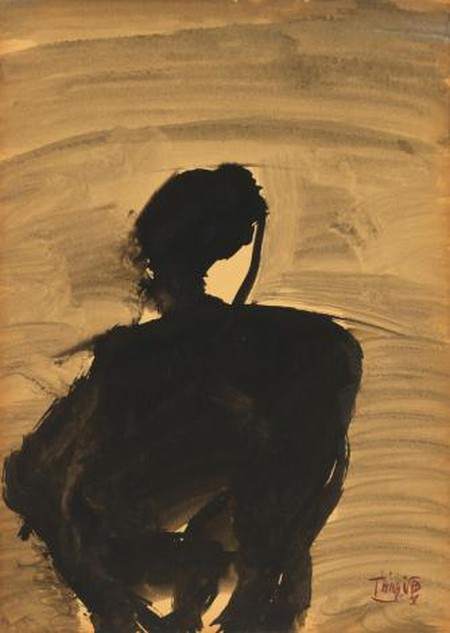 Lin Fengmian spent part of his early career in Europe studying painting techniques in France from 1920-25. His works from this period showed the clear influence of this experience as they were shaped by the major upheavals gripping European art. Drawing from such trends as Impressionism and Cubism, Lin created works that presented Chinese themes using Western techniques; even though, in his native country, there was hardly a market for such bold colours and expressive brushstrokes. During the Chinese Cultural Revolution, Lin’s background as an intellectual, his time spent in Europe and his European-influenced art caused him to come under suspicion. He was imprisoned for years and personally destroyed many of his art works, flushing them down the toilet. Lin is also important in the history of 20th century Chinese art for his contributions to arts education. On his return from Europe, Lin Fengmian helped found the China Academy of Art, which would later become the School of Fine Arts in Hangzhou. 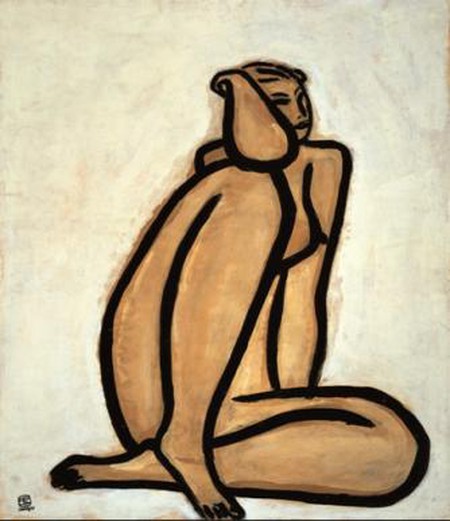 Sichuan-born Sanyu was born into a wealthy silk production family which provided him with a rich education. This included classical arts, laying the foundation for his artistic direction. In 1921, Sanyu moved to France, joining a wave of Chinese artists and art students. This was, of course, a France that had been indelibly transformed by the artistic rivalry between Picasso and Matisse, who for a decade had vied for artistic supremacy. By eschewing the École nationale supérieure des Beaux-Arts in Paris for being mired in old academic norms, Sanyu’s actions and thus works revealed an attentiveness to new trends. Throughout his career numerous expressive, full-bodied nudes à la Matisse would flow from his brush. In France, Sanyu was introduced to linocut printmaking techniques as well as oil painting, which he began to experiment with in 1929. However, due to the fickleness of the war time art market, Sanyu struggled to find an outlet for his works during his lifetime. Since his death in 1966, Sanyu has gained wider recognition for his blending of the artistic traditions of East and West; Musée Guimet in Paris held a retrospective of his works in 2004 and the National Museum of History in Taipei exhibited 129 works to celebrate his centennial in 2001.

Along with Zao Wou-ki, Chu Teh-Chun was part of a younger generation of artists who spent time absorbing Western art influences, his works revealing an experimentations with abstraction. Born into a scholar-artist family, Chu studied both traditional calligraphy and Western art at the School of Fine Arts in Hangzhou (then directed by Lin Fengmian), where he came across Impressionism and Fauvism. This art education was interrupted by the Second Sino-Japanese War, and Chu moved west to Sichuan along with the government and universities. during this time, Chu was granted an arts professorship. However, politics again intervened and in 1949 Chu Teh-Chun followed the exodus of Chinese nationals as the Chinese Civil War came to an end. Already firmly established in his career, Chu travelled to Paris in 1955 where he has remained ever since. In Paris, Chu was exposed to the art of pure abstraction through the art of Nicolas de Staël. Chu’s workings with oil and canvas became increasingly exploratory and expressive in his brushstrokes. Pushing the boundaries of landscape painting, Chu sought to convey the expressive spirit of nature and the artist rather than its form. His painted works seem to fuse the philosophy of Chinese calligraphic with Western painting; in later years, Chu produced many pieces of beautifully expressive Chinese calligraphic works. Chu Teh-Chun is a member of the prestigious Académie des Beaux-Arts in Paris.

Zao Wou-ki enjoyed a celebrated and prolific career in France and, like Chu Teh-Chun, was a member of the Académie des Beaux-Arts. He too studied at the School of Fine Arts in Hangzhou in the 1930s before emigrating to France in 1948. This was due to China being on the cusp of revolution, making Zao one of the most successful émigré Chinese artists. Post-war France proved to be a more welcoming world than that discovered by Sanyu and Lin Fengmian. Zao sought to avoid the constraints of being labelled as a ‘Chinese’ artist with its Orientalist connotations and produced many diptychs and triptychs of purely abstract work. Working with both colour and monochrome ink, Zao adopted the gestural language of Abstract Expressionism and exploited the expressive possibilities of both oil and ink. 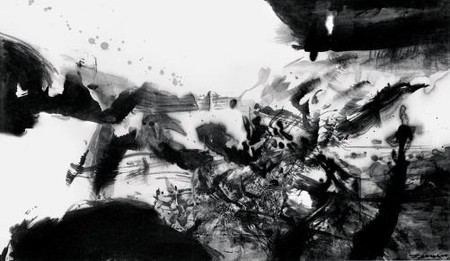 As with all other 20th century Chinese artists, T’ang’s artistic path was shaped by the political upheavals of the age. Born in 1927 in Fujian Province, his family moved to Vietnam during the Second Sino-Japanese War (1937-1945). In 1948, T’ang was sent to Paris to study medicine. However, once he arrived T’ang spent most of his time absorbing great masterpieces of European art on display in the city’s museums and galleries. Ten years after his arrival in Paris, T’ang exhibited his works, many of them diptychs using gouache or ink on paper, first in Paris then in other European cities. In the meantime, his family had moved back to Xiamen, China following the end of the war only to find themselves swept up in the Cultural Revolution. Over the years T’ang lead a separate life travelling through Europe, the United States, India, Japan, but never returning to China.

Although celebrated for winning the Nobel Prize in Literature in 2000 for Soul Mountain and renowned for his absurdist drama, Gao Xingjian emigrated to Paris in 1987. Trained in Chinese ink painting, Gao works in monochromatic tones and created elegant spaces of light and dark. The layering of tone and subtle shifts in patterns of blending gives his work a transcendental quality; purely abstracted forms coalesce, inviting the viewer to interpret the work. Other works depict shadowy figures in a state of solitude. 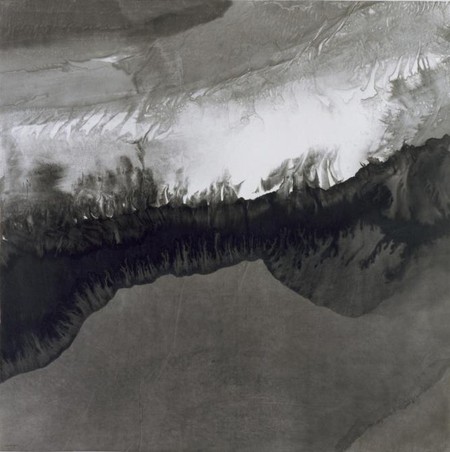