The Celebrity of Madame Chiang Kai-Shek 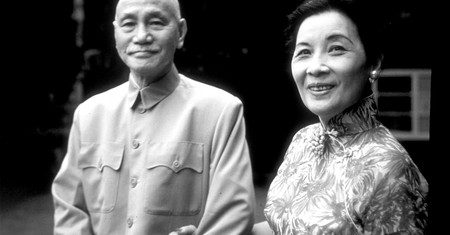 Madame Chiang Kai-shek was, for a time during World War II, one of the most powerful women in the world, a key figure in China’s politics and a charming champion of its relationship with Western powers. She served as a pioneer for women on the global political stage, operating at a time when there were hardly any other prominent female politicians.

The Rise of the Dragon Lady

Soong Mei-ling was born in 1898 to a wealthy and powerful family in Shanghai. She rose to worldwide prominence as the wife of Chinese leader, Chiang Kai-shek. After they married she was better known as Madame Chiang Kai-shek. Soong’s particular blend of power and charisma earned her the nickname Dragon Lady from her many admirers, both political and personal, around the world.

Soong and her husband were in charge of China during a tumultuous time in its history. At the turn of the 20th century, the country had not long removed its imperial leaders and declared itself a republic before it splintered into arguing factions, vying for control. Throughout this time, the Chiangs attempted to unify China and bring it to prominence on the world stage.

She is best remembered in the West, however, for charming American politicians and the public – appealing passionately that the US aid China in its resistance of Japan.

Thanks to her family wealth and connections, Soong was educated in the US and spoke fluent English with a distinct Georgian accent. Her husband Chiang, whom Soong had married in a politically beneficial union, possessed little first-hand experience of American culture and was unable to speak English. So it fell to Soong to act as the intermediately between the US and China. 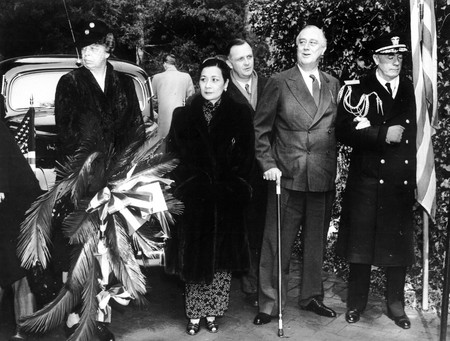 During these turbulent political times, Soong was much more than just a translator, as her rousing speeches, strategic thinking and political acumen showed. She made representations to the US government at a time when China was far from the superpower it is today, and she became the first Chinese person (and only the second woman ever), to address both Houses of Congress in Washington DC.

In her address to the US House of Representatives on 18 February 1943, she eloquently implored the country to help China stand up to Japanese invasion: “You, as representatives of the American people, have before you the glorious opportunity of carrying on the pioneer work of your ancestors, beyond the frontiers of physical and geographical limitations … I can also assure you that China is eager and ready to cooperate with you and other people to lay a true and lasting foundation for a sane and progressive world society.”

Her public speeches were a sensation and a six-week tour of the US generated huge donations to China’s war efforts from both big donors and small-town Americans. Most remarkably, all this was achieved at a time when the US was still infamously anti-Chinese. Her visits and influence even helped repeal the 1882 Chinese Exclusion Law, which had unfairly discriminated against Chinese immigrants to the US.

Soong and Chiang’s prominence in the US was cut short, as the political situation at home in China became ever more complex. With the Japanese defeated, the country’s peacetime was curtailed as it fell into civil war. By 1949 Chiang’s Nationalist government had lost power to Mao Zedong’s Communists. The Chiangs were forced to flee to Taiwan, where they established the rival Republic of China. 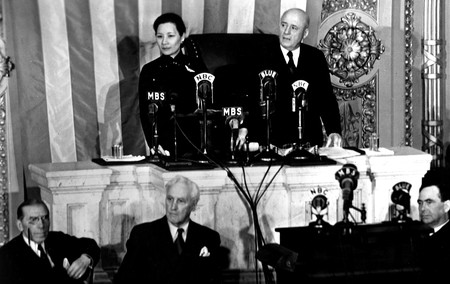 The legacy of Madame Chiang Kai-shek

Despite fleeing China, Soong’s influence in the United States endured. Her advocacy for the Nationalist leadership in Taipei, which the US recognised as China’s legitimate government until 1979, helped ensure Communist China’s isolation from the US for more than 20 years. She remained in Taiwan and was heavily involved in domestic politics, until her husband’s death in 1975, when she quietly moved to Long Island in New York.

As both Taiwan and China’s international standing changed towards the end of the 20th century, Soong retreated from politics, announcing that she would no longer “intervene in state affairs”. The Dragon Lady’s fire had been extinguished after six decades of trailblazing political activity.

Soong Mei-ling died in the US in 2003, at the age of 105, leaving behind a complex legacy in both China and the United States. And while the leadership of her and her husband continues to be analysed and critiqued to this day, it’s fair to say that few individuals exerted a bigger influence on 20th-century Chinese history, and indeed geopolitics, than Madame Chiang Kai-shek. 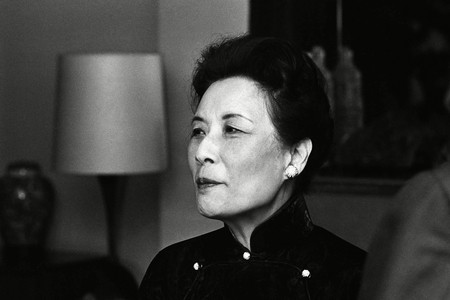