Water Margin, Journey to the West, Romance of the Three Kingdoms and Dream of the Red Chamber; these four novels form the core of Chinese classical literature and still inform modern culture. As with Dante or Shakespeare in Europe, they are touchstones to which Chinese literary culture persistently returns to discover new relevance and fresh insight.

Dating from the Ming and Qing dynasties, these four novels are the bedrock of Chinese literary culture. Their influence has spread across Asia to inform elements of Japanese, Korean and South East Asian mythology. The writing and dissemination of these four works marked the emergence of the novel form in China as a counterpart to more refined philosophical and poetic works. The more expansive form of the novel allowed for a synthesis of the historical and the mythological, whilst also developing along more accessible narrative lines. These works thus marked a limited but notable democratization of literature which is perhaps most evident in their use of vernacular Chinese, rather than the Classical Chinese which had previously dominated. These four works also revealed the novel’s potential to embrace a multitude of perspectives, and to allow for irony; this permitted writers to voice previously suppressed critiques about the ruling order, whilst also expressing the vast multitude of voices which made up the Chinese populace. 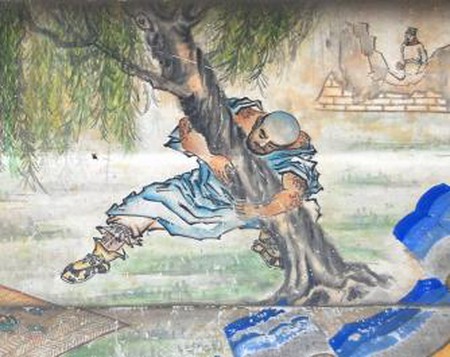 Published in the 14th century, Water Margin was the first of the four classical novels to be released, and introduced the vernacular form and style which the others would adhere to. The title has been translated in a number of ways, including as Outlaws of the Marsh, Tale of the Marshes, All Men Are Brothers, Men of the Marshes, or The Marshes of Mount Liang, and whilst doubts persist over the identity of the author, most attribute it to Shi Nai’an, a writer from Suzhou. The novel is set in the Song dynasty and depicts a group of outlaws who eventually go on to serve the Emperor in battling foreign invaders. It was based on the real life story of the outlaw Song Jiang, who was defeated by the Emperor in the 12th century, and whose gang of 36 outlaws came to populate folk tales throughout China. These folk tales generated a mythology around Song Jiang which led to various dramatic adaptations and printed retellings. These precursors would all go on to inform Water Margin, which condensed and synthesised the various tales which had erupted around the Song Jiang story. Some have attributed Water Margin’s success to its ironic representation of common grievances against the ruling classes. Its depiction of outlaw’s rebellion tapped into resentments held by many during the Ming dynasty, and the novel was indeed banned for a period for its potential for promoting sedition. The novel has gone on to be the subject of numerous modern adaptations, and has continued contemporary relevance in its prototypical tale of rebellion, repression and subservience. 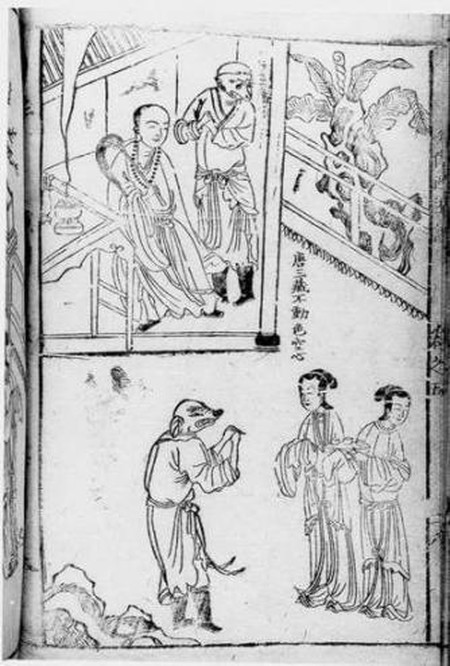 From Journey to the West by Wu Cheng’en | © WikiCommons

Journey to the West

Perhaps the most influential of the four classic novels of Chinese literature, and certainly the most widely known beyond China’s borders, Journey to the West was written in the 16th century by Wu Cheng’en. It depicts the pilgrimage of the Buddhist monk Xuanzang to India, and his resultant travels through the Western provinces of China, accompanied by his three disciples. Whilst the framework of the story is based on Buddhism, the novel draws on a host of Chinese folk tales and mythology, as well as pantheism and Taoism to create its fantastical cast of characters and creatures. These creatures include various demons who Xuanzang encounters along his travels, and a variety of animal-spirits who assume human form. This latter category includes the three disciples, who are characterised as a monkey, a pig and a river ogre, and who are bound to Xuanzang as they attempt to atone for their past sins. An early and partial English translation of Journey to the West by Arthur Waley was entitled Monkey and focused on the exploits of this character, which has also been the case with many subsequent adaptations. Journey to the West was an early example of the Shenmo genre, which incorporated a range of fantastical fiction focusing on the exploits of gods or demons, and was very prominent in the rise of vernacular Chinese literature during the Ming dynasty, as the centuries old folk tales were written and disseminated for the first time. Journey to the West was the most famous example of the Shenmo, and remains omnipresent in China, in a huge variety of adaptations. The novels continued relevance is a reflection of its paradigmatic qualities, as with the Greek myths of Homer, it set down the ancient myths of Chinese culture for the first time, and remains a repository for those myths even today. 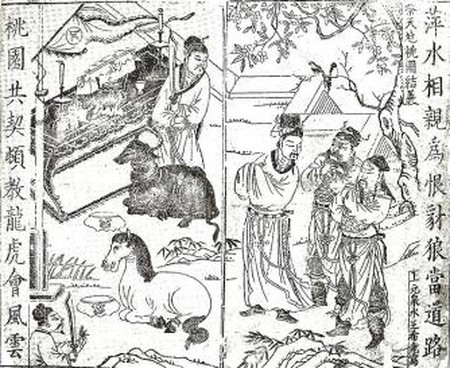 Oath of the Peach Garden | © WikiCommons

Romance of the Three Kingdoms

A historical novel which recounts the political intrigue and deceit within the Three Kingdoms period of Chinese history, Romance of the Three Kingdoms combined history, legend and mythology to tell the tumultuous story of this era. This epic tale was written by Luo Guanzhong and incorporates hundreds of characters, weaving a multitude of complicated plotlines in its portrayal of the disintegration of a unified China into three warring kingdoms, the three states of Cao Wei, Shu Han, and Eastern Wu, and their eventual reconciliation and unification. Romance of the Three Kingdoms remains hugely popular in China, and has had a profound influence on national identity, since it dramatises one of the foundational myths of the nation; that of its disintegration and unification. The belief in the cyclical nature of history is expressed succinctly in the opening line of the novel: ‘It is a general truism of this world that anything long divided will surely unite, and anything long united will surely divide’. The complexity of the political world it depicts, as well as its epic length and density, can make reading Romance of the Three Kingdoms a challenge. However it remains a uniquely potent work, which informs Chinese political consciousness event today in a way that rivals Shakespeare’s place in English self-identity. 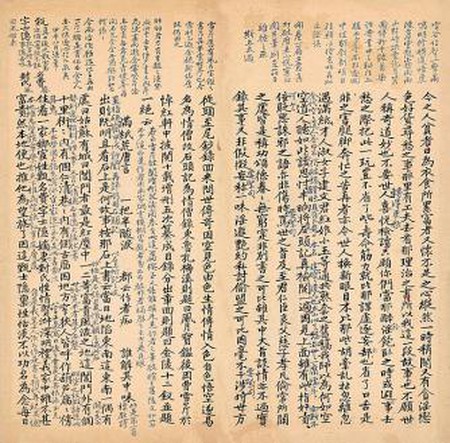 A page of the novel ‘Dream of the Red Chamber’ | © WikiCommons

Dream of the Red Chamber

Written in the mid-18th century during the Qing dynasty, Dream of the Red Chamber was the last of the four great novels of Chinese literature to gain prominence. It is a semi-autobiographical work which focuses on the financial and moral decay of author Cao Xueqin’s family and by extension the Qing dynasty. Recognized for its formal beauty and innovation, Dream of the Red Chamber has spawned a scholarly field of its own, ‘Redology’, which is still a thriving academic subject in China. The novel is markedly more nuanced and precise than its fellow classics, and it offers an incredibly detailed rendering of the life of 18th century Chinese aristocracy, paying particular attention to the complexities of social conventions in this esoteric world. The novel is thus a repository for those interested in Chinese culture, granting readers an insight into the religious, social and political world of upper class China. It also offers insight into a wide variety of aspects of Chinese culture, from medicine to mythology and art, all of which continue to inform contemporary culture in China.