The Best Things to See and Do in Chengdu

Chengdu Road | © Andrew and Annemarie
On the surface, Chengdu is admittedly not a very beautiful city – however, it makes up for it with a vibrant, yet laid-back street life, incredible culinary prowess and a fascinating 3,000-year-old history. Here are a few places and ways to get a taste of Chengdu’s historical richness and cultural energy.

Hang out in a temple

Chengdu has an excellent quartet of temples within the city limits, many of which are still in operation. The Wenshu Monastery (Wénshū yuàn, 文殊院), built in the 700s, is a particular favorite. Still home to an active Buddhist monk community and located near the city center, the sprawling grounds take up nearly 60,000 square meters (645,835 square feet), and are punctuated with beautiful gardens, more than 80 Buddha relics, and gorgeous buildings. It’s also a spot where locals hang out in the gardens, drinking tea, playing cards and whiling away the hours.

For a more Taoist experience, head to the flashy, expansive Qingyang Palace (Qīngyáng gōng, 青羊宫). Most of the parts of the temple that remain in existence are restorations from the Qing Dynasty (1644-1911 AD) and somehow survived the Cultural Revolution. You’ll also find nuns and monks training at the Two Immortals Monastery toward the back of the temple. It’s the only monastery in southwest China authorized to certify Taoist training, initiations and the passing of lineage.

While Chengdu itself has a mostly modern edifice, there are a few ancient treasures tucked amongst the streets. The first is the tomb of Wang Jian (Wángjiàn mù, 王建墓), a general who lived from 847-918 and ruled as emperor over the Shu Kingdom. The above-ground tomb is decorated with the intricate carvings of 24 musicians and dancers, considered to be the best surviving record of Tang Dynasty court entertainment as well as perhaps the only lifelike sculpture of an ancient Chinese king.

Then, head to the western suburbs of the city where, in 2001, archaeologists unearthed a major site containing the ruins of the Shu Kingdom, a cradle of Chinese civilization dating 1200 BC to 1100 BC. The huge, well-appointed Jinsha Site Museum (Jīnshā yízhǐ bówùguǎn, 金沙遗址博物馆) includes the excavation site and around 6,000 relics ranging from pottery to jade artefacts to pottery and tools. The 3,000-year-old ago artifacts are a breathtaking display.

Finally, there is Dufu’s Thatched Cottage (Dùfǔ cǎotáng, 杜甫草堂). This park and memorial is dedicated to Dufu, a famous, beloved poet who lived during the Tang Dynasty. In 759 during the An Lushuan Rebellion, he sought refuge in Chengdu and it was on this site that he composed around 240 poems. His abandoned cottage was later rediscovered and renovated in 907 by another poet, Wei Zhuang. From there, the site has been expanded upon. Today, you’ll find an expansive park and several homages to his work and the era.

Pandas have long been adopted as China’s national icon, beloved for their adorable faces and used as a diplomacy tool towards other nations. They are also incredibly endangered. In total, there are fewer than 2,000 giant pandas left in the wild, of which 70% are located in the mountains of Sichuan. If you’re a particular fan of these bamboo-chowing creatures, head to the Chengdu Research Base of Giant Panda Breeding (Chéngdū dà xióngmāo fányù yánjiū jī, 成都大熊猫繁育研究基), located just 18 kilometers (11.2 miles) from the city center. Founded in 1987, the facility started with six giant pandas and today the facility is home to around 120. There’s ample opportunity to check them out, chilling and eating – although they’re generally most active in the morning. You’ll also find other rare animals including around 80 red pandas. The facilities themselves are large and well appointed.

To get there, you can take a taxi or head to bus 49 with a transfer stop at Zhaojue Heng Road (Zhāojué Hénglù, 昭觉横路站) to bus 87 to the Panda Base stop (Xióngmāo Jīdì, 熊猫基地站; ). The bus trip will take about 45 min. 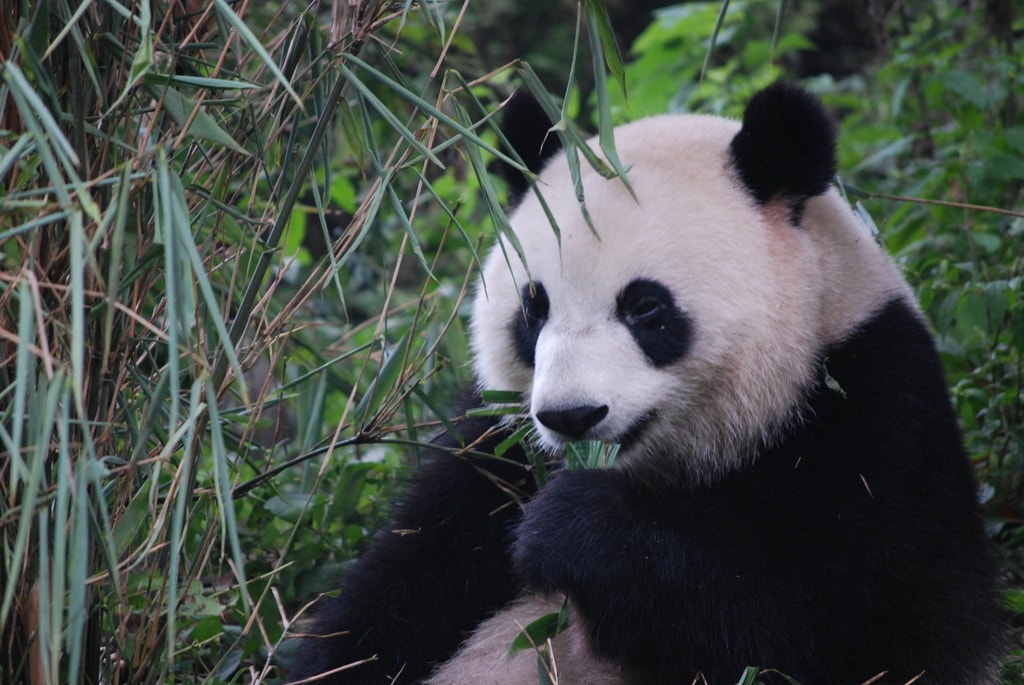 Once you get your fill of the urban landscape, a bit of greenery and fresh air is just a quick 45-minute train ride away to Qingcheng Mountain (Qīngchéng shān, 青城山). Known as one of the four original birthplaces of Taoism in China, its fame draws not only from the beauty of its 36 peaks, but also from Taoist mythology as the founder of Taoism, Zhao Daoling, thought the serene natural landscape of Qingcheng Mountain was the perfect home for the development and prosperity of Taoism. The best way to miss the crowds is to head to the back mountain entrance (Hòu shān, 后山). Once you reach the top, you’ll find a little restaurant where you can sample local greens, drink tea and gaze out across the lovely peaks. If you’re tired, you can also take a cable car back down to the base.

To get there, take a train from Chengdu to Qingcheng town center (about 45 minutes) – there you’ll see an army of tuk tuks that will take you to the base of the mountain (Hòu shān, 后山).

Chengdu is renowned for its laid-back atmosphere where people really enjoy the more pleasurable things in life. Part of this is drinking tea with friends for hours on end. When the weather is fair, head to a public area, bring a book, a deck of cards and be ready to sip the day away. There’s even a saying that tea houses of Sichuan rank first in the world, while those of Chengdu rank first in Sichuan. One of the best places to drink tea is in the Culture Park (Wénhuà gōngyuán, 文化公园) in the outdoor tea garden that overlooks the lotus pond. You can also take a walk down the Jinjiang River, which wanders through the center of the city and stop in Baihuatan Park (Bǎihuā tán gōngyuán, 百花潭公园) to rest with the locals and maybe even get an ear cleaning while drinking tea.

For a more formal tea house experience, which often includes little snacks and performances, head to one of the many tea house emporiums around town. For a great introduction to tea drinking culture, check out the famous Shunxing Old Teahouse (Shùn xìng lǎo cháguǎn, 顺兴老茶馆). Located on the third floor of Chengdu International Convention and Exposition Center, the teahouse covers an area of 3,000 square meters (32,292 square feet) and is built using traditional wood architecture. Traditional folk performances are offered throughout the day, like the famous Sichuanese face changing, an erhu performance and acrobats.

Chengdu is incredibly flat and the neighborhoods are rather spread apart. The best way to explore its quiet back alleys, bustling neighborhoods and peaceful riverside is on two wheels. Luckily, Mobike and Ofo bikes are both readily available in Chengdu and easy to use – just make sure you download the app before you arrive! In terms of neighborhoods, the best biking can be found within the first ring road, specifically Qingyang District, the route along the Jinjiang River, the Shuyuan Residential District and the Caojia Residential District. Here, you’ll see local markets, back alleys, tea gardens and lots of interesting vendors and people.

Chengdu locals are famous for their culinary fanaticism and cooking culture. The result is delicious dishes at nearly every bend in the road, from humble local snack spots to high class, multi-course establishments. So wonderful is the food of Chengdu, that UNESCO deemed it a City of Gastronomy in 2011. To sample a full range of dishes with a knowledgeable guide, book an experience with Chengdu Food Tours where you’ll taste a range of snacks and local dishes and get a dose of culture on the side. To set out on your own, start in the area around the Wuhou Temple or the Kuanzhai Alley (Kuānzhǎi xiàngzi, 宽窄巷子) where you’ll find a whole host of vendors all in one place.