The Best Restaurants in Qianmen, Beijing 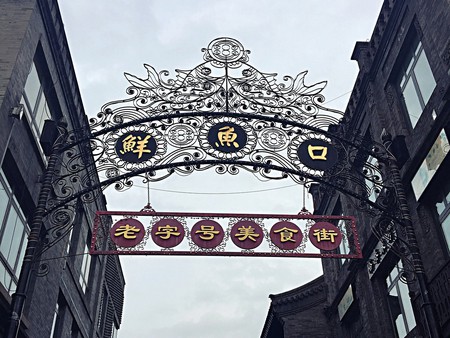 For anyone who wishes to see Beijing in its ancient light, Qianmen is a district not to be missed. One important reason is that Qianmen Street, running along Beijing’s central axis north to south from the Archery Tower of Zhengyangmen to Tiantan Park, still maintains the late Qing dynasty-style buildings. The region is filled with restaurants that feature the best old Beijing flavors, as well as new restaurants that reflect globalization’s impact on the historic neighborhood. Check them out below.

Seriously, it’s rather weird to wait in a ridiculously long line to get into the popular Quanjude Roast Duck Restaurant in Qianmen while there’s another just as good roast duck restaurant just around the corner. That’s the Sijiminfu Roast Duck Restaurant. The chain restaurant’s Qianmen branch also features other old Beijing snacks like imperial court tofu and noodles with bean paste.

This restaurant’s décor is as unworldly as its name, but its food is not quite as much so, as the restaurant specializes in Sichuan cuisine, which is famous for its strong spices. Zen is perfect for those who want to try authentic kung pao Chicken and mapo tofu in a more private space.

There are many time-honored restaurants in Beijing that specialize in only one snack, and Duyichu Shaomai is such a place. Opened in 1738, it was given its name by the emperor Qianlong of the Qing dynasty, meaning “the only restaurant in the capital,” because it was the only restaurant that was open when starving Qianlong and his attendants tried to find a restaurant upon their returning from Tongzhou on Lunar New Year’s Eve. It’s said that its flower-like shaomai dumplings require 16 discrete processes by hand to be made. The dumpling’s fillings change with the seasons, so you won’t be bored even if you dine there frequently.

This chain restaurant is a barbecue skewer bar with pig brains being its specialty. Chinese people believe that you are what you eat, so you might find some who come to the restaurant wishing to become smarter. If you find eating brains unacceptable, you may still choose to eat other more conventional skewer snacks such as mutton and chicken wings. After all, it’s the lively ambience that actually matters in a barbecue skewer bar.

This refreshing Taiwanese restaurant appears quite unique among a group of old Beijing brands in the buzzy Qianmen area. Other than traditional Taiwanese dishes like braised pork on rice and beef noodles, you can also come here just to spend the afternoon, because the restaurant also provides delicious Taiwanese desserts like red bean soup and pineapple cake.

If you are craving some home-style Hubei cuisine, which is known for freshwater fish dishes and down-to-earth vegetable dishes, then remember to stop by Jingyi Restaurant. Apart from the regional delicacies, the restaurant also has a range of homemade Chinese rice wines to choose from.

You might have already learnt about the famous Beijing snack of stewed liver, but you probably don’t know that Tian Xing Ju is the forefather of the dish. It is said that stewed liver was invented by Hui Xian Ju around 1990 combining two folk dishes, stewed pig liver and fried pig lungs, that have existed since the Song dynasty. Hui Xian Ju later merged with Tian Xing Ju.

Suzuki Kitchen on the Yangmeizhu Xiejie is THE Japanese restaurant of the Qianmen area. People, especially the younger generations, cannot resist its beef sukiyaki hotpot and curry rice, or the beautiful Japanese-style garden in the restaurant’s courtyard. Remember to reserve in advance, or you may have to wait for a long time with an empty stomach.