The 13 Best Hostels in Beijing 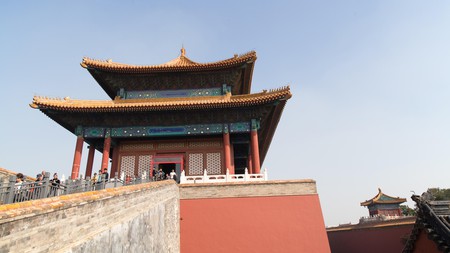 Marvel at Tiananmen Square and Chairman Memorial Hall, stroll down the bustling pedestrianised streets in Qianmen and Wangfujing, hunt for bargains in the Silk Market and Panjiayuan Flea Market, and stay at one of these 13 hostels if you want to enjoy Beijing on a budget. 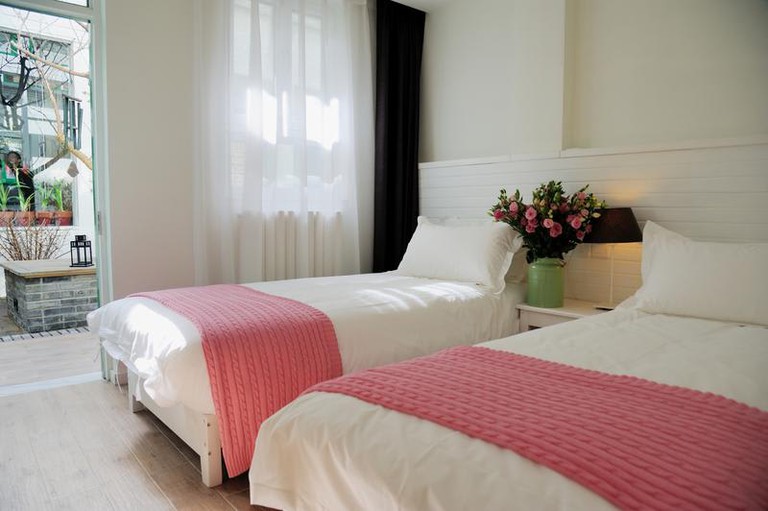 This modern hostel is located in the thick of the action, a 15-minute walk from Tiananmen Square and the Forbidden City, just steps from the Dongdan subway station that connects you to the rest of Beijing. The flower-filled garden fuses the old and the new: surviving segments of city walls dating back to the Ming Dynasty sit alongside modern decor and a trendy in-house bar. 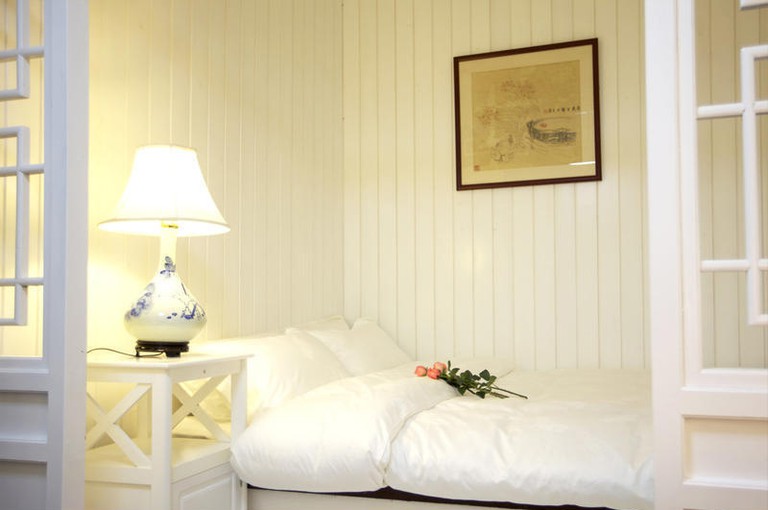 Sleek, simple and stylish are traits you can look forward to at this central Beijing hostel, a winner of Hostelworld’s ‘Hoscar’ award for the best properties in China. Consisting of spacious double, family and dormitory rooms, Chinese Box Courtyard Hostel provides guests with free dinner, breakfast and bike rentals, and even Chinese tea ceremonies and calligraphy classes that give a taste of the local culture. 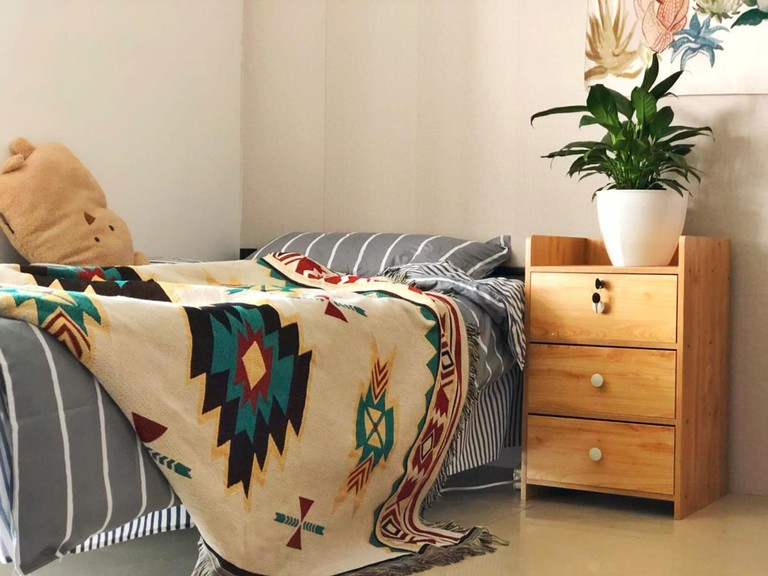 Yolo House is not your average hostel; it comes with luxuries such as an outdoor swimming pool, a terrace and even a spa and wellness centre, and all at reasonable rates. The rooms include mixed dorms, family rooms and dorms with cable TV and on-demand movies. At only a 10-minute taxi ride from Tiananmen Square, the Forbidden City and other popular sites, this place is a rare find. 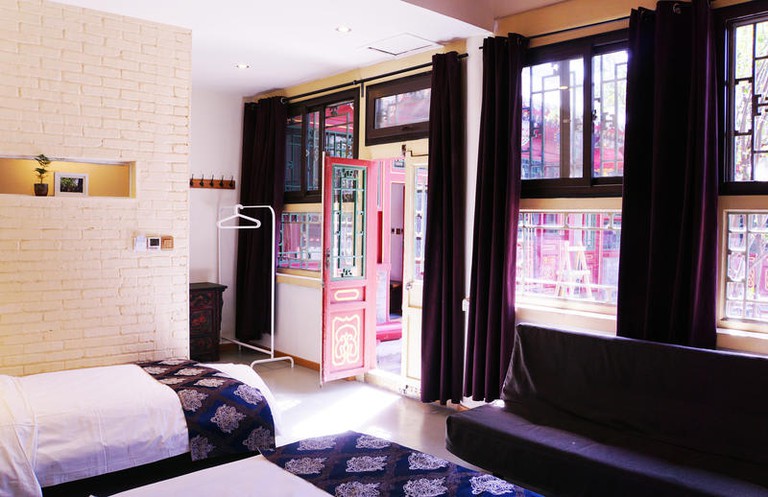 Fancy yourself as a budding Bruce Lee? Book a bed at Fly by Knight, which features a martial arts practice area as well as on-site kung fu lessons for guests. And the Chinese traditions don’t end with martial arts: this guesthouse offers authentic accommodation in a beautifully restored Chinese courtyard house. 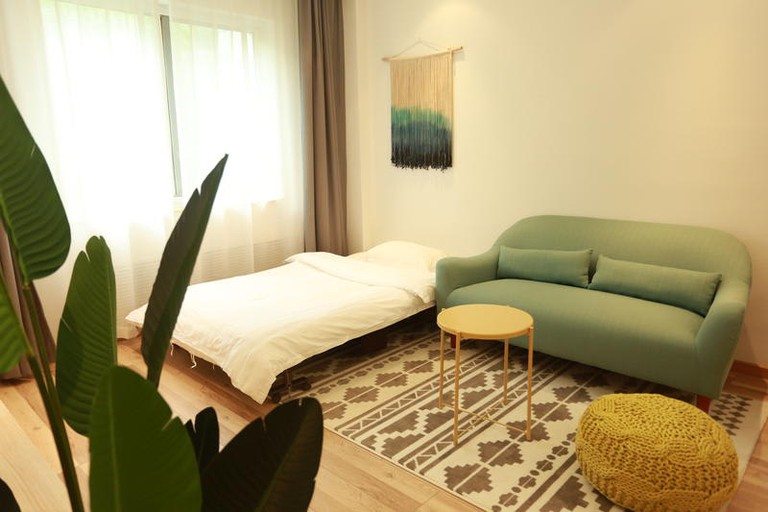 Located just around the corner from Sanlitun, the heart of Chaoyang District, Lab Hostel offers guests convenient access to some of the city’s best attractions and nightlife. Unlike most hostels in Beijing, this one is designed in a minimalist Nordic style, which means white linens and walls, simple wooden furniture and warm lighting. It offers private and shared dorm rooms, and there are a couple of common areas where you can chat with other guests or watch a movie. 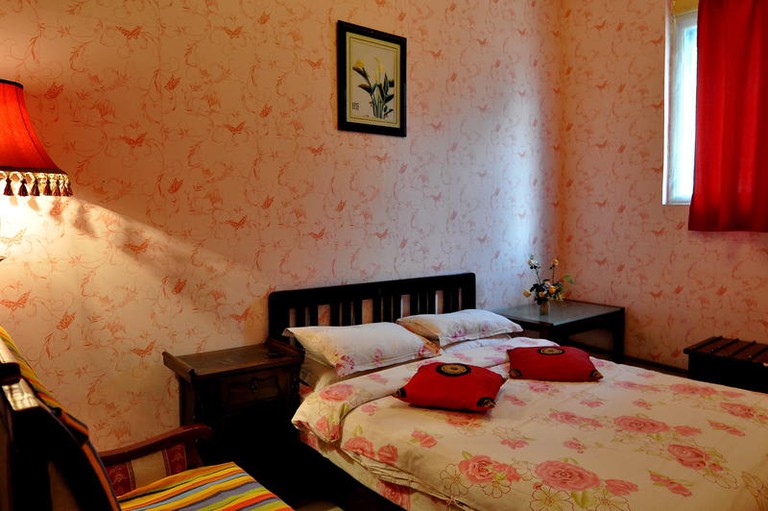 Red lanterns symbolise prosperity in China and a stay at this top-rated hostel is sure to be good for your pocket. This traditional Chinese guesthouse is an urban oasis in the Hutong area of downtown Beijing; the main building dates back to the 18th century and is attached to the famous Zhengjue Temple. There are private and dorm rooms spread across three other locations on the same street. 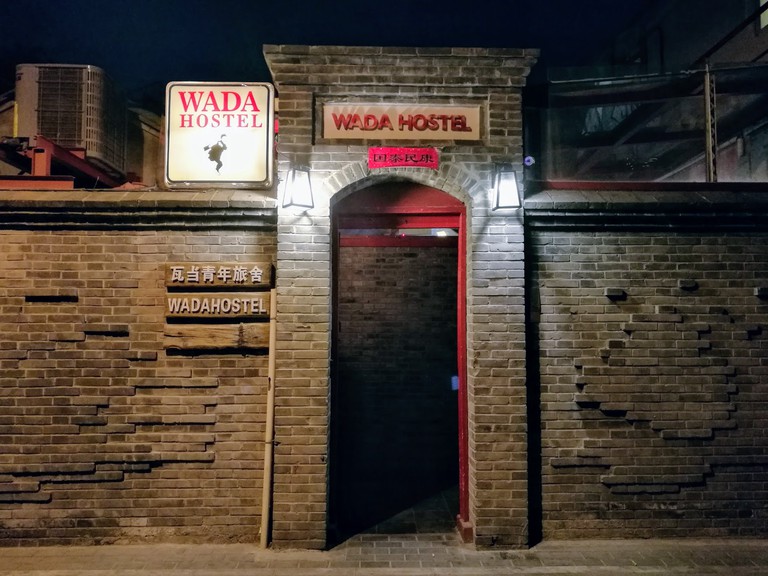 Wada International Hostel | Rodrigo Nishikiori
Book Now
Wada Hostel is tucked away in a charming hutong, surrounded by local Beijingers. This spot is a favourite of travellers seeking a reasonably priced refuge from the hustle and bustle of the city. The rooms are simple but nicely decorated, have flat-screen TVs with cable, air conditioning and Wi-Fi. There are shared and private bathrooms. The vibe is super laid-back, and you can find a quiet spot in the spacious common room or the courtyard to chill out with fellow globetrotters.
Open In Google Maps
Xicheng District Beijing, China
+861066537539
Give us feedback 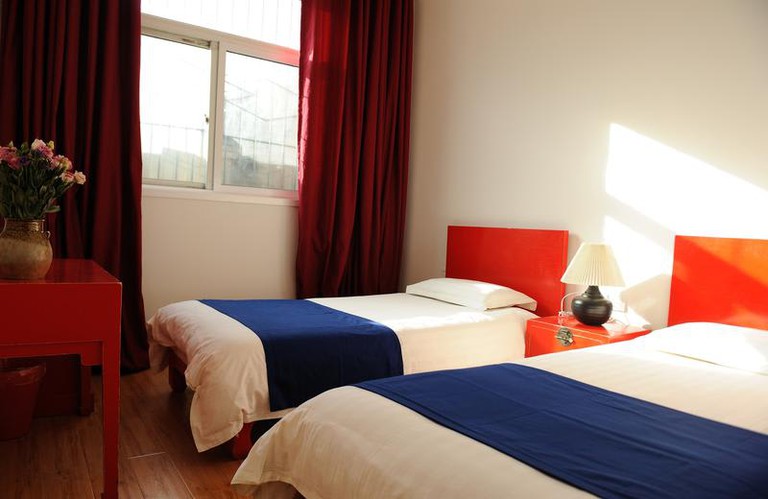 Peking International Youth Hostel is among the most popular hostels in Beijing, which is both good and bad: good because it means it’s pretty awesome, bad because it rarely has vacancies. Located at the south end of Nanluoguxiang, a famous hutong in Beijing, this hostel is a short stroll from some big attractions and a metro station. The staff can help you organise hiking trips and book tours and shows. The rooms are colourful, clean and brightly decorated; the shared bathrooms have hairdryers; and there’s Wi-Fi everywhere. There’s also a café, a sun terrace and a book bar where you can relax during your down time. 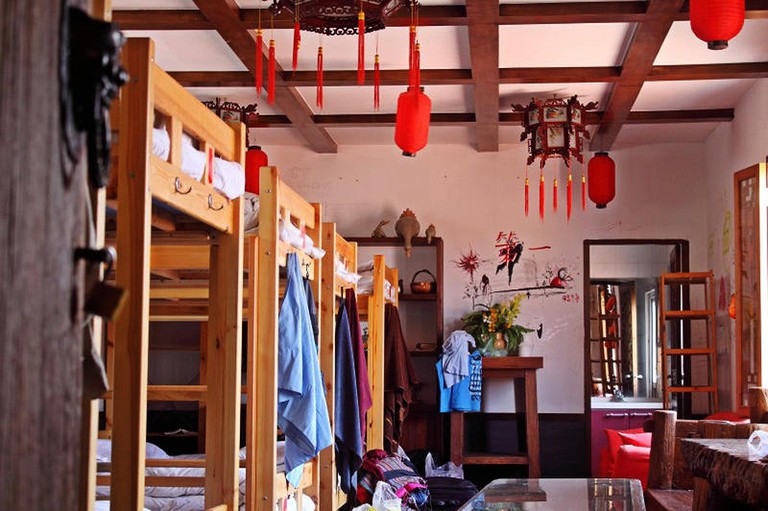 The fun and friendly 365 Inn is a Western-style backpacker joint in the heart of Beijing. There are dorms full of great-value bunks, common areas furnished with the flags of the world, an on-site eatery serving tasty European and local cuisine and a bar pouring cheap drinks – all in a 150-year-old building just a 10-minute walk from Chairman Mao’s Mausoleum and Tiananmen Square. 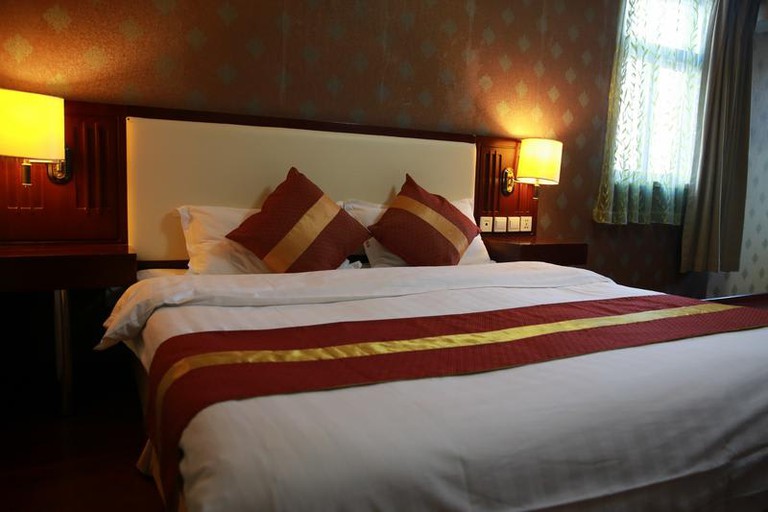 View Rooms
Happy Dragon Saga Youth Hostel offers one of the cheapest stays in the Chinese capital. The dorm rooms are basic but the location is central and the vibe is friendly; the warm welcome even extends to a free beer at check-in, best enjoyed on the scenic rooftop beer garden.
Everything you need to know 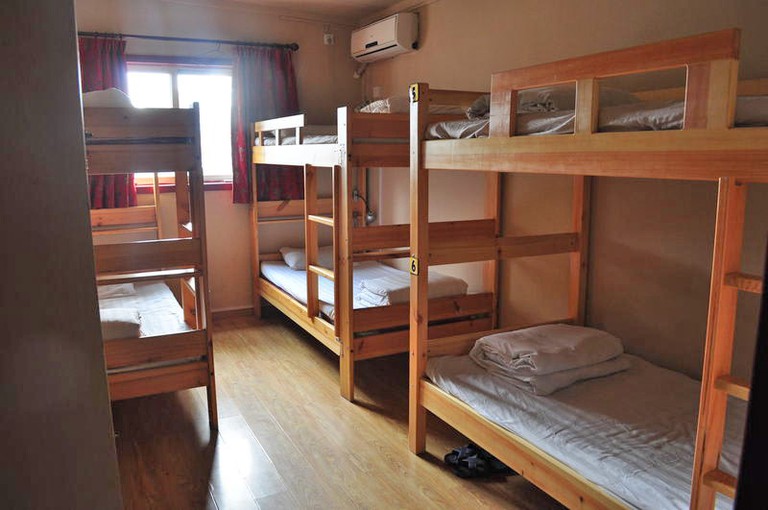 Sitting on the doorstep of Tiananmen Square, this hostel is an institution of the Beijing backpacker scene. Leo Hostel offers neat dorms, a reception desk that can book tours and transport, and a lively on-site bar that’s always crowded with backpackers from every corner of the globe. 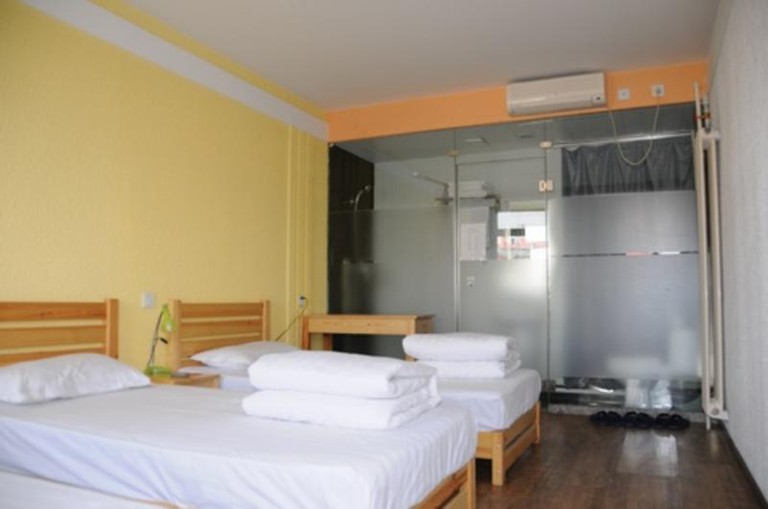 Qianmen Hostel is an oldie but a goodie. Situated in a hutong minutes from Tiananmen Square, it dates back to 1875, when it was built as a gathering place for celebrities in the late Qing Dynasty. In 2016, it was turned into a guesthouse. Within the 19th-century Chinese architecture, you’ll now find modern amenities – there’s Wi-Fi everywhere. One super-cool detail is the wood-carved balconies, which overlook the bright central courtyard. Travellers can choose from more than 40 rooms, both private and shared; but, take note, this place doesn’t have many of the bells and whistles that newer hostels boast. 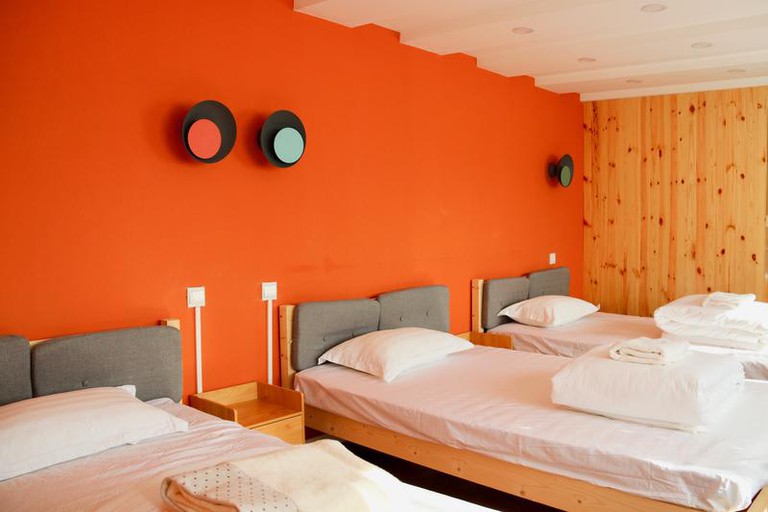 This hostel isn’t strictly located in Beijing, but, for backpackers planning a trip to the Great Wall of China, the Box House is the best budget option on its doorstep. In fact, the eastern wall of the property is actually part of the Great Wall. This hostel occupies the century-old Si-He-Yuan house, and provides modern dorms and private accommodation among the mountains.

Countryside, Historic
Give us feedback