The 12 Best Day Trips from Tianjin

Imperial Garden, Chengde © NH53/Flickr
Looking to escape Tianjin just for a day? Thanks to high-speed trains and incredibly efficient transportation systems, getting out of town at dawn and returning at night is easily achievable. Aside from Beijing, most surrounding places are vastly smaller towns and generally quiet outdoor retreats. Just be aware that your Mandarin will be put to the test!

This should be at the top of your list. If you haven’t already, go to Tianjin’s famed rugged section of the Great Wall. Huangyuan is a tough climb, so make sure you’re well-rested and ready for a physical challenge. It’ll take you about an hour and a half to reach The Wall from Tianjin. The section is open from 7:30 am to 6:30 pm and costs 50 RMB (7.25 USD). Kudos if you make it to the top!

Your first day trip to Beijing should be to the acclaimed Forbidden City. Located in the center of Beijing, you will need a few hours to roam each quarter of this ancient architectural wonder. But before you enter the city, walk around the world’s largest public open space, Tiananmen Square. After you exit the Forbidden City, head to the adjacent Jingshan Park. At the top of this park is a small mountain with magnificent views of Beijing’s skyline and the rear of the Forbidden City.

The back entrance to the Forbidden City as seen from Jingshan Park, Beijing © David Stanley/Flickr

The Summer Palace is located in the Northwestern region of Beijing, so including the train ride and the taxi from your train station, this site may altogether take a few hours to reach. Once you arrive, be prepared for a long day of walking through its mansion, pathways, hills and bridges. That being said, the Summer Palace is one of Beijing’s best treasures. Springtime or autumn are the ideal times to visit.

Baixan Mountain is a rarity in North China, being almost entirely covered by trees. Baixan itself has its own legend: its name means, “eight fairies.” The story goes that drawn to its beauty, eight fairies once passed the mountain’s forest and stopped for a drink by a rock, now called “Baxian Table.” Its highest peak is called Cricket Cage, and is the highest mountaintop in Tianjin at 3,434 feet.

About 27 miles away is the closest city to Tianjin: Tanggu. If you’re looking to truly test your Mandarin, this is the town. Check out Golden Street — the city’s main shopping area has loads of low-priced, local clothing and jewelry stores. There are a few hidden gems, including dumpling restaurants and even a rumor of an unusually out-of-place bohemian bar with live music.

This city is situated between Beijing and Tianjin is only 58 km away, making a day trip to Langfang easy. Not the most happening city in China, Langfang is still a nice change of scenery. Rent a boat at the expansive outdoor Nature Park, or enjoy its indoor counterpart, Jiutian Leisure Valley. Squeeze in a photo op at the Tongbai Mosque, then head to Langfang Century Square to walk this less densely populated city.

Up for a circus? Wuqiao Acrobatics World is a televised show that you can watch in person. It is suggested to go in the morning so you can later enjoy the city’s temple tours. Cangzhou features several sacred sites that are open to visitation, like the Confucian Temple, the Qingxian Pangu Temple, the Muslim West Temple, and the Muslim North Pagoda. Afterward, wrap up your day in Remin Park. 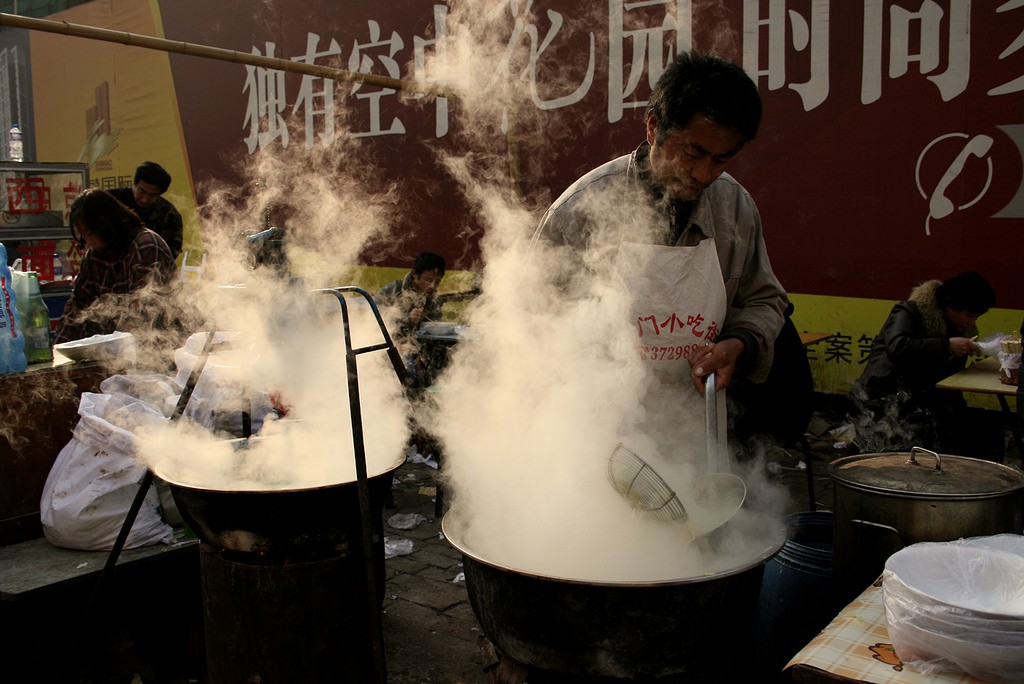 About 124 miles away is the surprise wondrous, historical city of Chengde. To get as much out of the trip as you can, you’ll need to leave early and come back late. You may even need to devote two separate day trips to get the full experience. Favorite spots are the Imperial Summer Palace of Mountain Resort, The Temple of Universal Peace, and the Eight Outer Temples in The Bishu Village, which are comparable to Tibet.

Just a few hours from Tianjin is The Shanhai Pass, where the Great Wall of China meets the ocean at the Bohai Sea. This marvel is the only part of The Wall that meets the sand. You won’t be able to actually climb the wall, but you can enjoy the view and even rent a camel to walk along it. Highly recommended and only known to some, Shanhaiguan Great Wall is to not be missed.

From Tianjin, Mount Pan (Pan Shan) is located 75 miles away and is a 2-hour drive. Its highest peak is 2,815 feet above sea level, which makes its temperature nice and cool during the hot summer, averaging late 60s to early 70 degrees in the daytime.

First built in the Tang Dynasty, and later rebuilt in the early Liao Dynasty (984 AD), Dule Temple has only two buildings left standing after WWII: the Entrance Hall and Guanyin Pavillion. The latter is said to be China’s oldest wooden multi-story structure. Inside, it houses a large clay statue of Buddha.

Last but not least, this Kung Fu temple is the repository of Shaolin Wushu of the region. It provides an immaculate, ancient, tranquil, and authentic experience. Monks are actually onsite, and are genuinely kind and helpful. The temple’s design is described as a fusion of Chinese and Indian Buddhism.

Skip the neighboring town of Baoding. It’s been voted as China’s most polluted city.