The 11 Best Things to See and Do in Xicheng, Beijing

The 11 Best Things to See and Do in Xicheng, Beijing

Prince Gong's Mansion | © Curt Smith / Flickr
Known for its political importance, lakeside bar street, and sprawling parks, Beijing’s Xicheng district is full of things to see and do. Whether you’re an athlete, a foodie, a history buff, or a photographer, there is something for everyone – here’s our round-up of the top picks in town.

Take in Beihai Park from the Temple of the White Dagoba

Park
Beihai Park | © Edwin Lee / Flickr
The climb to the top of the Temple of the White Dagoba can be challenging, as it’s a steep set of snaking stairs lead up the mostly forgotten relic. While the climb can seem a bit daunting, it is well worth it. Successful tourists who reach the top of the temple’s stairs will be rewarded with a beautiful bird’s eye view that overlooks Beihai Park below. Not only will Beihai Park be in vision, but the Temple of the White Dagoba will be clearly visible – from here, climbers can explore the temple’s exterior.
More Info
Open In Google Maps
1 Wenjin Street, Xicheng Qu Beijing Shi, 100034, China
+861064033225
Visit website

Drink with friends at 4Corners

Drink with friends at 4Corners

This beloved bar and restaurant is a favorite of many Beijingers. Located in Xicheng district, 4Corners has quenched the thirst of Beijing’s expat and local population time, and time again. Offering decently priced drinks, in an exciting and friendly atmosphere, 4Corners is a great place to be on weekend nights. With its regularly hosted events, including live performances of all types, Beijingers from all over the city make frequently make their way to 4Corners for the night. 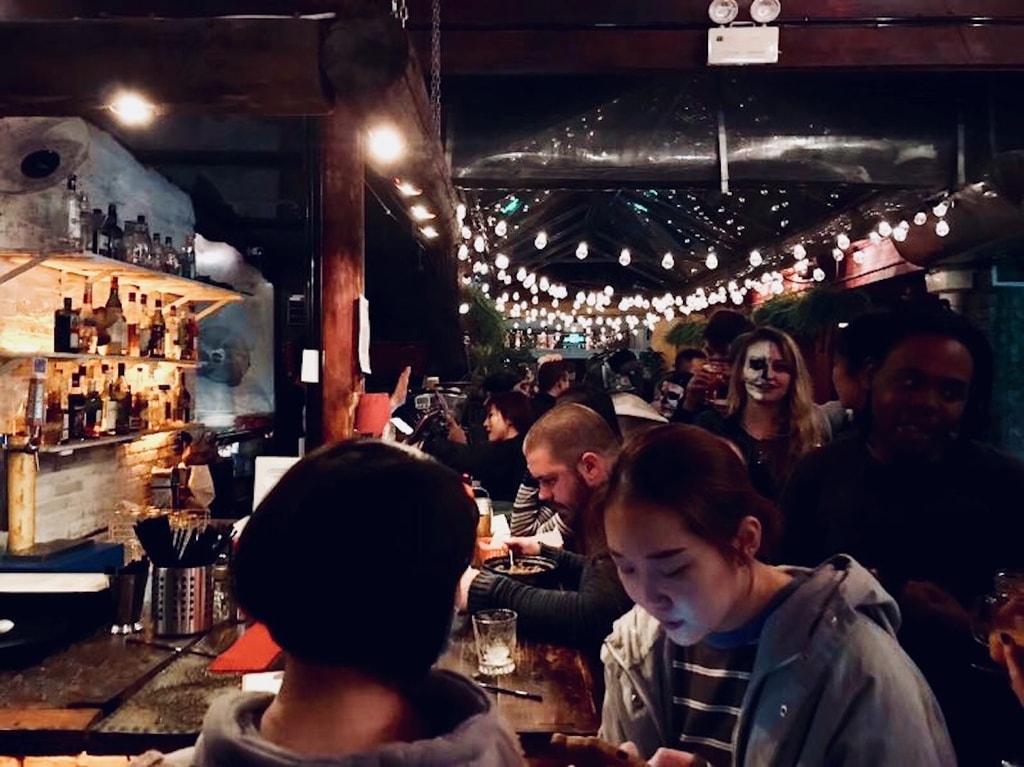 Shop
Beijing-Liulichang_Dongjie-10-Pinsel-gje | © Gerd Eichmann / WikiCommons
Walking through Liulichang Street is what you could assume walking through history would be like; stall after stall, filled with copies of relics from the past, occupy the bustling street, and vendors sit and wait hoping to sell something, anything. The busy street is home to calligraphy sets and Chinese trinkets galore. For some foreigners, Liulichang Street presents the perfect opportunity to attempt to barter for souvenirs, while for others, the street poses an opportunity to glance into China’s past.
More Info
Open In Google Maps
Beijing, China

Fill up at HaiDiLoa Hotpot

Restaurant, Chinese, $$$
Hot pot | © jen / Flickr
Indulging in a hotpotmeal is essential for anyone visiting Beijing. While eating hotpot did not originate from Beijing, everyone who lives here – expats and locals alike – have at least tried it once. You will find that more often than not though, that hotpot is a regular meal for many Beijingers. This being said, while visiting the Xicheng district, it is imperative that you go for a hotpot meal at HaiDiLoa Hotpot. This particular restaurant is foreigner-friendly, in that non-Chinese speakers can comfortably interface with the restaurant’s ordering system via an iPad, making the process of enjoying a sit-down meal in a foreign country more relaxing. While dining here, customers can expect an attentive staff that is willing to help, and, of course, absolutely delicious food. For diners who prefer their food to be spicy, there is a pot for that, and for the other diners who prefer a less-intense meal, there is a pot for that, too.
More Info
Open In Google Maps
Yanjingli West Street, Shi Li Pu, Chaoyang Qu Beijing Shi, China
+861065060403
Visit website

Learn about history at the Beijing Capital Museum

Museum
The Capital Museum houses artefacts from Beijing’s past | © TK Kurikawa / Shutterstock
For history buffs, visiting the Beijing Capital Museum in Xicheng district is an absolute must. Rich in history, the museum is a comprehensive introduction to the history of Beijing. Visitors here can expect to come across an array of exhibitions that briefly dive into some of the most interesting, as well as important parts of Beijing’s past. While the museum is a bit on the smaller side, it is jam-packed with historical relics and information. If you are planning a trip to the Beijing Capital Museum, be sure to have your passport ready to gain admission into the exhibits.
More Info
Open In Google Maps
16号 Fuxingmen Outer Street, Xicheng Qu Beijing Shi, 100035, China
+861063393339

Spend a day shopping in Dashilar

Shop
大栅栏同仁堂药店_-_panoramio | © Panoramio / WikiCommons
Dashilar is a sprawling area in the Xicheng district where new meets old. Modern-day shops occupy the historic buildings that stand proudly in Dashilar. Bronze statues that have frozen Beijing’s past in time are scattered throughout the area, depicting locals, both young and old, performing daily tasks. A tram runs through the middle of one of Dashilar’s streets, adding a charming feel to the area. Dashilar, with its rich history and variety of modern-day amenities, is a wonderful place to waste a day away while in Xicheng.
More Info
Open In Google Maps
Beijing, China

Stretching across a section of Xicheng is a bustling street full of food. With everything under the sun skewered and ready to be eaten, the choice of what to look at and eat first and then after, and then again after that gets increasingly difficult as you continue to stroll down the street. For adventurous eaters and curious foreigners, Beijing’s Old Station Food Street is an absolute joy to explore. The rows of food stalls look almost never-ending at times, as does the variety of street food served at them – skewered scorpions, starfish, and tarantulas stick out of booths, while butchers, dumpling shops, and fruit markets occupy the stalls nearby.

Some of these suckers were still twitching on the stick! © shankar s. / Flickr

Museum
Prince Gong's Mansion | © Curt Smith / Flickr
For an enchanting look into the history of Beijing, visiting Prince Gong’s Mansion is a must. The palace grounds – which are home to the elegant mansion of Prince Gong, beautiful views of water, a luscious garden, and paths that weave like snakes around it all – are truly magical. Visitors here can expect to spend a couple of hours exploring the mansion’s land in order to immerse themselves in its rich history. While strolling through the mansion, visitors have the chance to see preserved relics from Prince Gong’s past.
More Info
Open In Google Maps
17 Qianhai West Street, Shi Cha Hai, Xicheng Qu Beijing Shi, China
+861083288149
Visit website

Bar, Chinese
Houhai sunset | © La Priz / Flickr
By day, Houhai Bar Street is reserved and scenic. Food stalls line the street that snake along Houhai Lake and tourists and locals weave in and out of shops that occupy the area. The view from the bar street is lovely, and although it can be crowded at times, the walk is relaxing. Fast forward to nighttime. As the day turns into night, Houhai Bar Street goes from benign to bustling – crowds of people occupy the street, hopping bar to bar, live music billows out of the buildings, and darkness shrouds the lake.
More Info
Open In Google Maps
Beijing, China

Tea Room, Tea , Chinese
Chinese tea shop | © Cosmin Dordea / Flickr
China’s tea culture is the real deal, and is an essential thing to get acquainted with whether you are just visiting, or are looking to make the country your home. This being said, a perfect way to quickly immerse yourself into this part of the culture is to visit a traditional tea house. Luckily for you, one of Beijing’s best tea houses is located in the Xicheng district. Alice’s Tea House is a tiny tea shop with a homey feel to it. The owner welcomes anyone – whether you have any knowledge about tea, or not – with open arms into her shop. At Alice’s Tea House, visitors can sit down with the owner to discuss the history of tea, as well as tea types – she’ll even happily offer you samples of teas she has in the shops.
More Info
Open In Google Maps
Xicheng Beijing, China

Take a stroll through Beihai Park

Park
Beihai Park, Beijing | © llee_wu / Flickr
Filled with history and stunning lake views, this urban park is a sprawling 171 acres of land in the Xicheng district. First constructed during the 11th century, Beihai Park has stood the test of time, and remains one of the most prominent parks in Beijing. Occupying the center of the park is an enormous lake boasting beautiful views. Visitors can choose to view Beihai Park from the water via a boat, or by means of walking. Due to the park’s massive size, taking a stroll around it, in completion, will take roughly an hour and a half. Although the walk may seem lengthy, because the it’s so rich in history and populated with visitors, there is never a dull moment here at this beautiful spot.
More Info
Open In Google Maps
1 Wenjin Street, Xicheng Qu Beijing Shi, 100034, China
+861064033225
Visit website