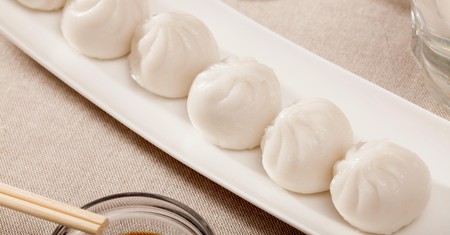 Shanghai has been covered by the coveted Michelin Guide for the past three years, with the 2019 edition featuring no fewer than 34 of the city’s restaurants reflecting the quality of cuisine on offer.

Starting with a heavy-hitter, Ultraviolet is Shanghai’s only three-Michelin-star restaurant. This high-concept, ultra-exclusive venue takes experimental and experiential dining to a whole new level. Conceived by legendary French chef Paul Pairet, Ultraviolet has been wowing both minds and taste buds since 2012. The experience begins when guests are collected from a meeting point and taken to a secret location – a windowless room with nothing but a long table set for 10. You are then immersed in a multisensory feast, focusing on the unusual taste combinations of each course. The atmosphere is driven by music, smells and images projected onto the walls. But the star of the show is very much the food, with 20 courses of culinary alchemy that allow hardcore foodies the chance to engage their imaginations as well as their stomachs.

While Wujie offers fine vegetarian and vegan dining, as one of Shanghai’s one-Michelin-star restaurants it offers some of the best food in the whole city regardless of its meat-free menu. Housed in an upscale European-style building on The Bund, this place is perfect for special occasions. Wujie uses top-quality ingredients to create dishes that blend modern cooking techniques with traditional Chinese ideas on food and nutrition. For vegetarians, it’s a delight to see meat-free food cooked with such creativity and attention to detail.

Moose is a one-Michelin-star restaurant flying the flag for less popular styles of Chinese cuisine. Occupying a century-old restored mansion, Moose serves creative and inventive Huaiyang-style food, which is considered one of the four great traditional cuisines of China. The food is based on the native cooking styles of the region surrounding the Huai and Yangtze rivers, predominantly those of the cities of Huai’an, Yangzhou and Zhenjiang in Jiangsu Province. Signature dishes here include the ‘Eight Treasures Gourd Duck’, consisting of roast duck stuffed with Chinese chestnut, pork, abalone, bamboo shoots, mushroom, ham, ginkgo and glutinous rice. Diners also shouldn’t miss the head chef’s signature dish of crispy white teat fish, which is actually a kind of sea cucumber.

Italian chef Umberto Bombana is a legend on Asia’s food scene, having spent 15 years working in the region. While his restaurant 8½ Otto e Mezzo Bombana in Hong Kong has garnered three Michelin stars, the Shanghai outpost is now hot on its heels, with two stars of its own. Occupying the top floor of a restored building in the city’s Rockbund area, the chic dining space has a classy cocktail bar and a balcony that has spectacular views of Shanghai’s Huangpu River. The kitchen, meanwhile, delivers hearty, classic Italian food using only the very best seasonal ingredients. As well as exquisitely prepared food, diners can expect faultless service and an impressive wine list.

T’ang Court, lauded as China’s first three-Michelin-star restaurant in the inaugural guide, was controversially demoted to two stars in 2018 – a status it still retains. Despite losing the accolade, T’ang Court is still one of the best dining options in the city. Housed in The Langham hotel, T’ang Court delivers a mix of classic and modern Cantonese dishes. House specialities include braised red lobster with sea urchin and fish maw with crab roe, as well as roasted suckling pig. The food is served up in a modern light-filled dining space, which some people might find a little too understated for the quality of the food on offer.

Another restaurant occupying a prime location on The Bund, the two-Michelin-star Shanghai branch of L’Atelier de Joël Robuchon makes an instant impression with the largest open kitchen in Asia. Diners can watch their food being meticulously prepared by the highly skilled kitchen team and, if you sit at the counter, you even get to order from a discounted set menu. This branch of the eponymous restaurant, named after the late French chef, is overseen by executive chef Francky Semblat who prepares Robuchon’s signature French dishes with finesse. Arrive early to sip a cocktail and take in the views.

Charmingly located in Shanghai’s former French Concession, YongFoo Elite is housed in a 1930s garden villa that previously served as the British, Russian and Vietnamese consulates. The building underwent a major three-year refurbishment to become a private club filled with the owner’s antique collection, lending it an air of old-school grandeur. On the dining front, YongFoo Elite offers gourmet cuisine that has been recognised with two Michelin stars. Traditional Shanghainese recipes are brought bang up to date in set menus that include dishes such as smoked codfish in qimen black tea and braised pork in brown sauce.

Another newcomer to the 2019 guide, gaining one Michelin star, is Il Ristorante – Niko Romito. This high-end hotel restaurant serves up haute Italian cuisine, accompanied by stunning views of the river and the iconic skyline of the Pudong district. Il Ristorante offers simple, unpretentious, contemporary Italian food, cooked to absolute perfection – the homemade ravioli and grilled scampi are both delicious. Just like its namesakes in Dubai and Beijing, the Shanghai branch’s kitchen is supervised by the renowned chef Niko Romito, who is known for his love of classic Italian flavours. Wine pairings are available here, offering Italian wines from lesser-known regions.