10 Of Shanghai's Most Impressive Architectural Feats 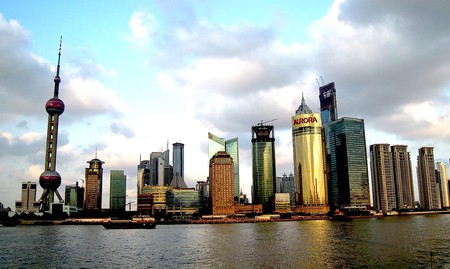 The city of Shanghai has undergone some of the fastest and most dramatic changes over recent years, initially flourishing in the 1920s/30s and adopting the fashionable Art Deco architecture of the time, the city is full of sleek eclectic designs and buildings. With so many buildings to choose from and so many fascinating architectural feats presently in progression, this list is just a drop in the ocean of the awe-inspiring architecture to be found in the bustling city of Shanghai. 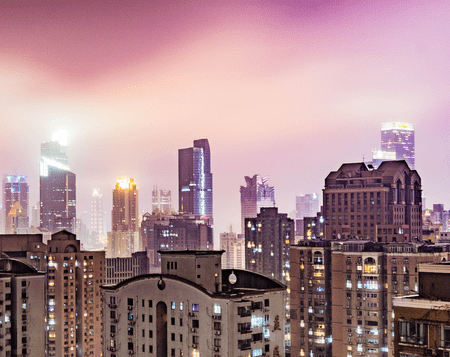 Many of the city’s most famous buildings can be found along the waterfront of the Huangpu River in areas such as ‘The Bund’, and this acts as a hive of tourist and business activity. New structures such as The Shanghai Tower – which will take over The World Finance Center as the tallest building in China – show the constant progression of the skyline today.

This utterly vast, concrete dominated space is far from its initial use as an abattoir, now home to shops and upscale restaurants. However, the building still maintains some of this previous eeriness, with many of its rooms and walkways left empty and the wide corridors and cattle signs as a constant reminder of its history. A labyrinth of concrete, the building has a circular center that is connected to the exterior walls via 26 ‘air bridges’. These bridges jut out of the walls at obscure angles, giving a different view depending on where you stand within the building. 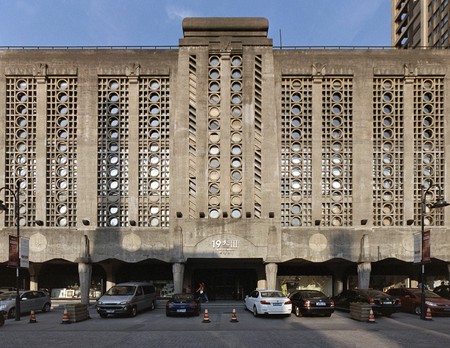 This stunning temple serves as Shanghai’s largest and oldest monastery, dating back to the 10th Century. Like most ancient structures in the city, it has undergone a rich and violent history of war and fire, with much of the building being renovated. It has rained many original features and is considered to be the most authentic temple in Shanghai. An inspiring place to visit, with the name referencing the Pipal tree under which Buddha achieved enlightenment, Longhua temple was constructed in 242 AD and covers a vast 20,000 meters squared.

This 88-story skyscraper was designed by architect Fazlur Khan and represents an Art Deco/modern style. Housing the Shanghai Grand Hotel and a selection of offices, the structure has a beautiful 33-floor atrium. Externally, the building is covered in an aluminium alloy lattice frame, which encloses a wall of glass, granite, stainless steel and aluminium. Sections of the skyscraper stack on top of one another elegantly, and the design intensifies as the build rises taller into the sky, twisting to its peak, an observation deck topped with a pinnacle. 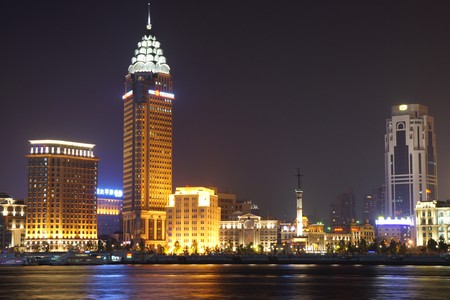 Designed by Morphosis Architecture, this long, angular building exists around canals and a man-made lake. Home to office spaces, executive suites, a library, an auditorium, exhibition space and cafe, this ‘compact village’ is impressive both inside and out. With its natural focus, the structure is designed to maximize natural light and also features a green roof to help control temperature. This open feeling continues throughout the building with its composition of glass, straight sleek lines and neutral colors set against joyful shades of natural green. One end of the build hovers over the man-made lake, whilst the rest of the building snakes back into the landscape behind.

Promoting sustainable, green and modern architectural design, this building was structured around an existing warehouse for the largest organic food farm in Shanghai. Using old freight containers, Playze designed the build to appear both functional and comfortable as a hospitality destination. Holes in the green containers create a playful use of sunlight during the day and at night make the exterior walls of the build appear dotted with lights. Surrounded by wooden walkways, the 78 containers maintain a cool character, with the previous warehouse sitting around the back.

Shanghai is renowned for its many bridges, with a total of six crossing the Huangpu River. The fourth-longest cable-stayed bridge in the world, the Nanpu Bridge was built in 1991 and was the first steel and concrete cable-stayed bridge in Shanghai. Leading in from Puxi, the bridge features an astonishing spiral, an engineering feat admired by professionals all over the world. Large towers soar 150m tall, holding the cables in place, majestically permitting drivers to pass through. The turn of the road also enables passers to view the bridge and admire its grand structure. 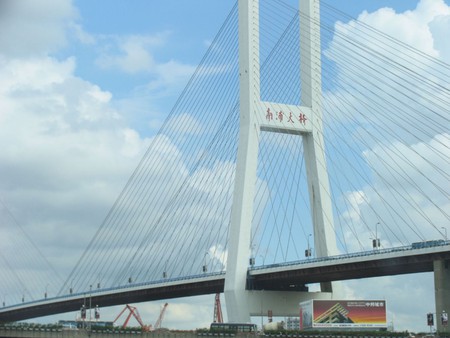 Shanghai is renowned for its many bridges, with a total of six crossing the Huangpu River | © Brian Brake / Flickr

Situated on The Bund, this TV and radio tower is a landmark of Shanghai, and rightly so. Its futurist architectural style makes it stand out even against the diverse collection of buildings and structures in this area. Finalized in 1994, it held the prize for China’s tallest structure up until 2007. Made up of a total of 11 spheres, the largest and most central globe is supported by a number of legs that drive deep underground. Perched on the edge of Lujiazui, right by the edge of the riverbank, the bizarre shape of the tower is highlighted at night, when a series of lights shine from the structure, enhancing it as a national landmark. 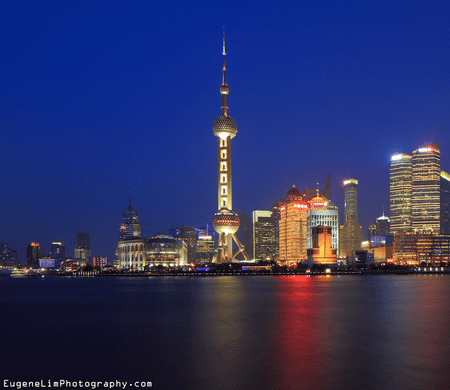 Like several of Shanghai’s best structures, the Oriental Sports Center can be found along the Huangpu River, on the Eastern side. Made up of three main buildings, this structure resonates a grandiose style. Designed by GMP Architects, the design of the sports center reflects the overall theme of water as it sits beside canals and a man-made lake. Tall, curved sides of the center rise upwards, reminiscent of waves or as many suggest, the sails of a boat. These broad, overreaching arches define all parts of the center but each are impressive in their own right. Inside the gleaming white features enhance the natural light that bounces off the water’s surface. 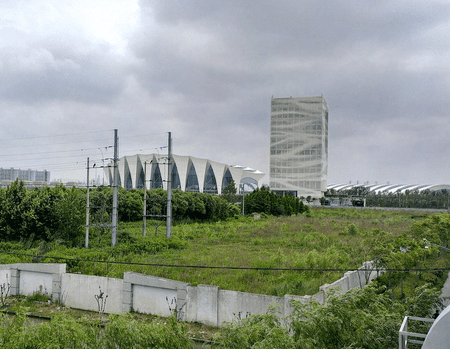 Situated in the center of Shanghai and serving as an entrance for those arriving into the city by boat, this structure is one of Shanghai’s most impressive and complex designs. A smooth glass surface is topped with a ribbon of green garden, serving as a roof and pedestrian path. A huge skylight allows light to flood into the below ground level space. Should you wish to see the site from above, there is a staggering glass bubble hovering over, from which you can see into the many different public spaces. Designed by Frank Repas Architecture, this building is not only impressive to look at, but functions with optimum energy conservation in mind.

Steering away from the fashionable and towards the more functional, this pedestrian bridge was built to cross the 50-metre gap in the river. Its structure reflects its purpose, as the bridge is curved to allow for adaptation of the river and its surroundings. Made up of a set of triangular metal trusses, the engineering minimizes the amount of materials needed. Delicately perched over the riverbed, the crisscross of white metal set against the light wooden walkway and roofing make it visually light. With its understated yet strikingly exquisite design, the Qingpu Pedestrian Bridge is almost ethereal to look at.