China’s burgeoning contemporary art scene is giving Western art capitals a run for their money, but female contemporary artists have yet to see the spotlight. The ten women introduced here were born into post-Mao China as members of a unique generation that was entirely – and disconcertingly – different from the world their parents knew. Forced to adjust to a tsunami of change, these ten women contemporary artists from China have made history in their own right.

In Bu Hua’s strong imagery and flat, decorative backgrounds are traces of traditional Chinese woodblock prints alongside clear influences from Japanese anime. A pioneer of digital animation in Chinese contemporary art, Bu Hua creates surreal narratives about modern life, many of which focus on feisty pig-tailed girls donning the uniforms of Communist Party youth group the Young Pioneers. A clever convergence of innocence and cunning, these young female characters stand at the center of Bu Hua’s invented world. Her series titled Savage Growth (2008) employs the artist’s signature crisp, graphic style to create an allegory of industrialization, pollution, and militarization. Her heroine, armed only with a slingshot, takes aim at flocks of white birds, which on closer examination are actually military aircrafts. “People in China pay a lot of attention to the past and the future, but it’s…forbidden to pay…attention to what is happening now, in real life… “ 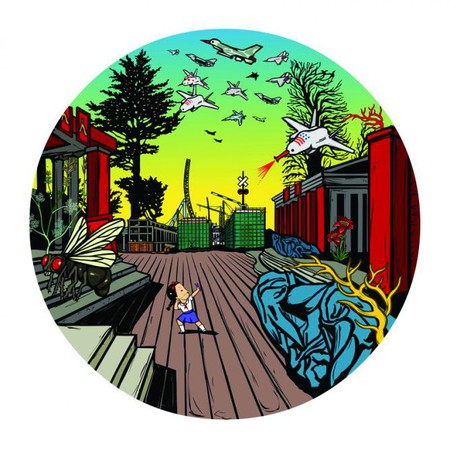 Cui Xiuwen caused the first lawsuit in Chinese contemporary art with her provocative work titled ‘Lady’s Room’ (2002). The piece frankly documented prostitution in ‘new’ China via a hidden video camera in the bathroom of a swanky Beijing nightclub. The artist recorded young hostesses changing their clothes, counting their money, and arranging their next liaisons, exposing the seedy underbelly of China’s economic miracle. Cui Xiuwen originally trained as a painter, graduating from the Central Academy Of Fine Arts in 1995. Her first provocative works feature girls dressed as Young Pioneers and posed in the Forbidden City, dwarfed by the claustrophobic walls and gates that represent Chinese tradition. Angel no. 3 (2006) features the same girl nightmarishly replicated as a crowd of adolescent clones, sleepwalking towards us with arms outstretched. Commenting on a history of bitter collective memories, Cui explains that her work is “about her own life experience…I would wake up and see the sky filled with this huge grey cloud which made me feel as if there was no hope.” Cui Xiuwen returned to the countryside to shoot her haunting series titled Existential Emptiness (2009). The figures in these photographs are tiny in a vast landscape, like solitary scholars in the mists of a literati painting. 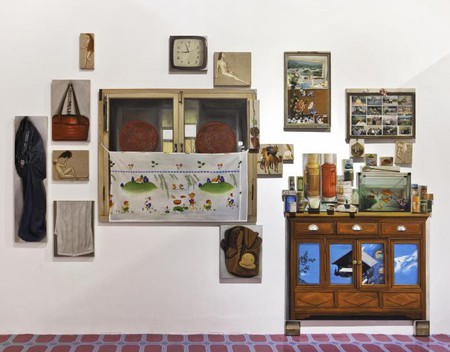 Dong Yuan paints objects of cultural and personal memory with meticulous realism, creating installations out of multiple canvases. Born near Dalian in 1984, Dong studied at the Central Academy Of Fine Arts in Beijing. As a student, inspired by Western still-lifes, she painted everything she owned. Small canvases depict her shoes, rolled up quilts, books, a rice cooker, a bath towel hanging on the back of a door, a teapot, even a box of tissues. Home of Paintings (2008) and Sketch of Family Belongings (2008), created across 59 and 186 respective canvases, record the tiny apartments in which she lived as a student. Later works were inspired by the artist’s family and childhood; the humble courtyard house where Dong Yuan grew up was to be demolished, thus she felt it was her duty to artistically recreate one room at a time. This specific project, titled Grandma’s House (2013), took the artist more than two years. She describes the process as “fixing it in memory” – an elegy to a lost world. “It’s hard to know how many things have to disappear before people find their hearts settled down,” she says.

Employing the Shaanxi embroidery technique that she learned from her grandmother, Gao Rong creates life-sized simulacra of everyday objects: a battered letterbox, a bus stop, a public phone, the entryway to the basement apartment where she lived as a student. These large sculptures made of fabric stitched around an armature of wire and foam padding are representative of memories in a world of constant change. “I want to show my responses to everyday life in a very particular and distinctive way”, the artist comments. Born in 1986 in Inner Mongolia, Gao Rong graduated from Beijing’s Central Academy Of Fine Arts in 2010. Her work replicates objects and locations of personal importance, from her grandparents’ simple home and the furnishings they owned to elements of the artist’s lived urban experience. “The history of objects is on their surface…I want to use embroidery to represent the tracks of time passing by on wood and steel.”

Born in 1980 in Shandong Province, Han Yajuan‘s work embodies the collective unconscious of her generation. “I am just trying to present what I see…what exists”, she explains. “20 years ago a bicycle was a luxury, but things change. There is so much pressure; the speed [of life] is so fast. I am trying to present my point of view and give people an opportunity to see their own lives.” Han Yajuan’s paintings reveal her interest in Japanese design, animation, and fashion. She paints the young ‘material girls’ of her generation, who want it all, and want it now. Han’s early works are about desire; the lustrous world depicted in the pages of glossy magazines. They feature single female figures, self-absorbed and apparently free from self-doubt. As her work progressed, the artist developed an Escher-like multiplicity of angles – a world of shifting perspectives and sharply fragmented planes populated by many tiny female figures. “Now we have a very high-pressure society for everyone, the life speed is very fast and most people can’t see it.” Her works reveal a ‘lost’ generation seeking an identity beyond conspicuous consumption and social status. 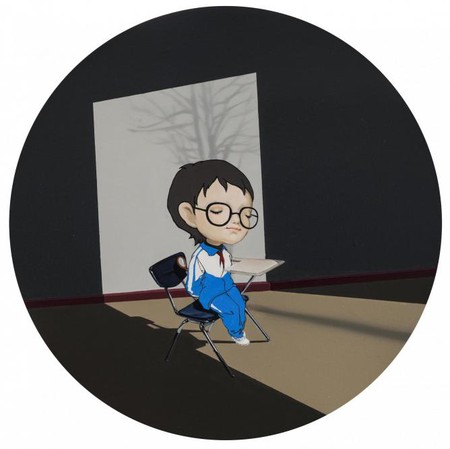 Born in Guangxi, Huang Jingyuan studied in Canada and the United States. Examining her own experiences of immigration, dislocation, and the politics and sophisticated propaganda of her homeland, she works in a new hybrid form based on vernacular photographs replicated in oil paint. Her work titled Gossip from Confucius City (2012) was inspired by the philosopher himself, but by the Confucius Institute as well, which dominates Chinese cultural transmission worldwide. From afar her works appears to be photographic, but upon closer inspection the scenes depicted are surreal fictions. Fascinated by the ambiguities and minute details of image reproduction, the artist painstakingly copied her own small collages in with intense rendering and high realism. She often reflects upon how the viewer creates a personalized meaning from experienced images, as well as her own view of a changing China – a globalized and sophisticated culture of aspirational individuals in which free speech is seen as a threat. “Things that appear straightforward and obvious when seen by themselves are paired with others that are entirely ambiguous…They have no relationship to one another. Which one is the reality? Which one is how we define who we are?” Huang Jingyuan invites us to question the truthfulness of the thousands of images we see every day. 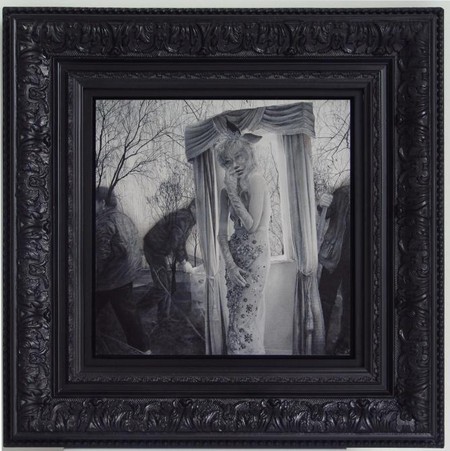 Born in 1981, Wang Zhibo studied the rigorous academic tradition of oil painting at the Chinese Academy Of Art in Hangzhou. Her subjects consist of landscapes and gardens; not the misty mountain vistas of ink painting tradition, but rather dystopian visions representing the liminal ‘non-places’ of the contemporary world such as hotel lobbies, shopping malls, and deserted public parks. The flattened spaces of her compositions subvert expectations of pictorial depth, producing often disturbing, complex vistas. Wang Zhibo expertly blends Eastern and Western art historical references, largely inspired by European frescoes for their architectural geometry and pellucid colors. Grecian themes such as the ‘discus thrower’ and other classical allusions are silhouetted against skeletal trees, dry fountains, and empty flower beds. She applies paint freely and expressively, with a limited palette of subtle, tertiary tones. Underpinning her landscapes is close observation and superb draftsmanship. 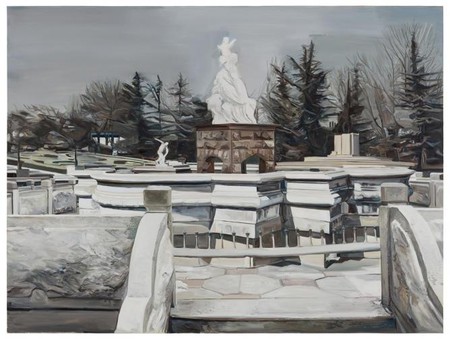 Figures and landscapes appear and disappear in Xie Qi’s seductive, lushly-layered art works that simultaneously veil and reveal through translucent, glazed, smeared, dripped, and dribbled layers of paint. Central to her 2014 solo show at Beijing’s Pékin Fine Arts Gallery was the Chinese Renminbi bank note with its iconic image of Mao Zedong. “You start from this very noble and serious historic image which gets rumpled and crumpled and dirty, is shoved into people’s pockets, and gets thrown around”, the artist comments. “So it underlines the absurdity of deifying these images. At the end of the day…they come down to this very plebeian level…I wanted to emphasise the absurd nature of the everyday.” So Green (Mao on 50 Yuan) (2012) only partially depicts the chairman, who is just visible behind transparent curtains of color as if vanishing into an irrelevant past. Xie’s paintings evoke a sense of loss, acknowledging the increasingly opaque layers of history. “I allow a lot of accidents”, she says. “I start with realism and then I obliterate it.” 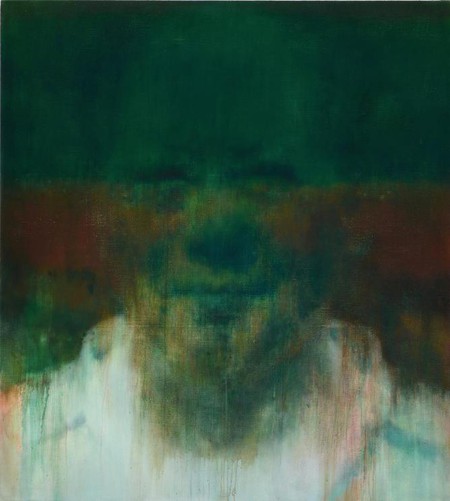 Merging traditional sculpture with performance art, Yu Ji’s foremost point of inspiration is the human body, having worked with dancers to create interactive installations in which the audience creates a physical intervention. Her choice of materials is purposeful and significant; simple and inexpensive, many of her works are created in concrete in plaster. An admirer of ‘social sculpture’, the artist created a series of truncated cement figures fastened to the wall by iron bands – a clear nod to the now-amputated limbs and battered torsos of Classical sculpture, and the Buddhist statuary of the Mogao Caves. Like many artists of her generation, Yu Ji continues to create works that comment on daily life and lived memory. 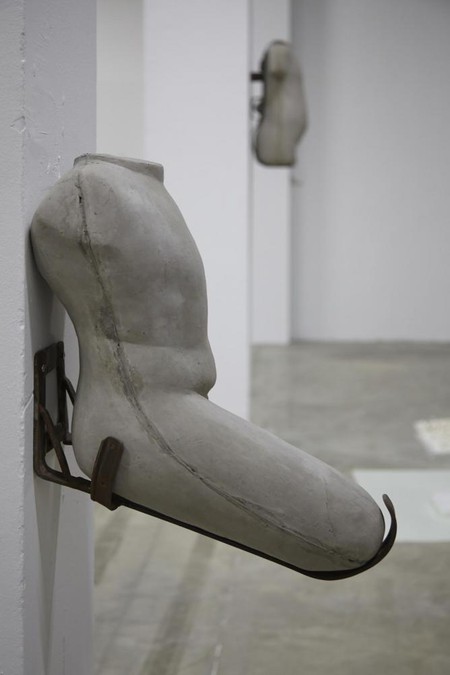 Born in 1978 in Fujian Province, photographer and sculptor Zhou Hongbin transforms the traditional motifs of classical shan shui painting into contemporary art for the digital age. Her works often depict small glimpses into an enclosed environment with a surreal, liminal quality. Other works depict the artist’s body, multiplied digitally and free-floating through an imagined place, far from any urban construction or destruction. Zhou’s aim is to create “lovely and pure thoughts…and avoid the conflict of reality.” Thus her images are a response to the harsh experience of daily life in China, complete with pollution of every kind, overcrowding, and unnatural levels of stress. In addition to her beloved rabbits (“very smart creatures in Chinese folk tradition!”) other animals such as deer, horses, snakes, and cranes symbolize the artist herself. Surreal and dreamlike, her photographs force us to question what is ‘real’, and what is ‘imagined’. 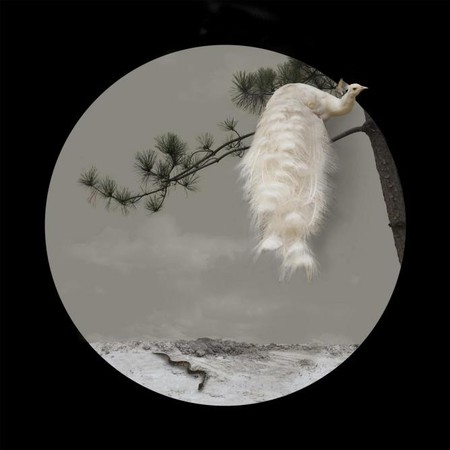