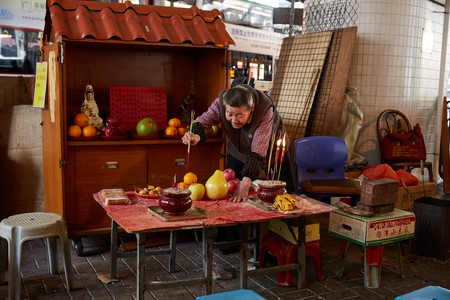 A woman lights incense and prepares to curse your enemies, for a fee | © Lesley Lau / Culture Trip

In a fume-choked underpass in Hong Kong, a group of women have made it their business to satisfy your most vengeful desires. These so-called ‘villain hitters’ will curse cheating spouses, petty bosses and even politicians, all for the price of a large coffee.

“I’ll beat your head so you can’t breathe anymore,” Auntie Rong chants. She smacks her wooden slipper against a stone slab, aiming for a paper effigy that grows more torn with every thwack. “I’ll beat your face so your family falls ill,” she continues. “I’ll hit your eyes so your life will fail.” Her chant helps to drive away the villains plaguing her client’s life. 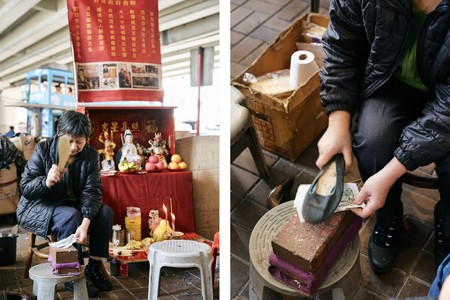 Shrouded in incense smoke with extra slippers and burnt scraps of paper strewn about her feet, the villain hitter completes the ritual. In a sacrifice to the Chinese deity Bai Hu, a mythical white tiger, she smears pork fat onto the mouth of a paper tiger before setting it on fire. Now that he’s been fed, he won’t have to go hunting for his own victims. 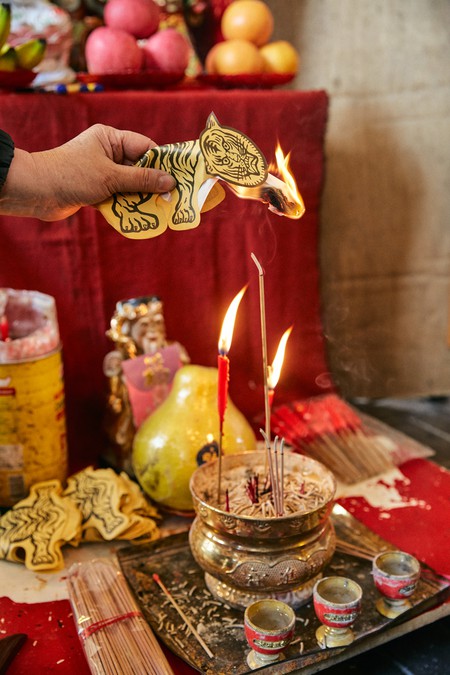 Auntie Rong, who moved to Hong Kong 20 years ago, says this work is her calling. She has been a villain hitter since she was 13 and was taught the ancient ways by her master in her home province, Guangxi, in mainland China. “There was no opportunity to do this work there,” she says. “The government had banned it.”

Known locally as ‘da siu yan’ or ‘hitting petty people’, Rong’s work is a sort of sorcery. It has its origins in the folk customs of China’s southern provinces, like Guangxi. But when the Communist Party came to power, such practices were shunned if not directly outlawed. Hong Kong, which remained under British rule until 1997, became a sort of sanctuary for many traditional Chinese customs. 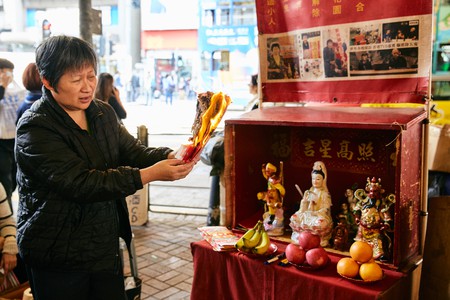 Auntie Rong set up shop 20 years ago in the fume-choked walkway under Goose Neck Bridge. This spot was chosen for its bad feng shui, making it ideal for casting curses. She’s now one of five villain hitters working under this flyover on Canal Road. Here the thwack of the villain hitters’ slippers competes with the dinging bells of the passing trams, the trill of the pedestrian crossing and the periodic shrill of the alarm from the fire station across the road. 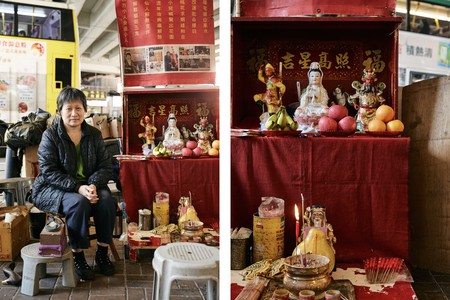 When they’re not busy casting curses, the villain hitters are an unassuming bunch. Squatting on plastic stools in front of miniature shrines, they are often overlooked by people bustling to and fro in Hong Kong’s most hectic shopping district, Causeway Bay. But Auntie Rong is not short of business. Besides customers who come to see her under the overpass, she also has clients overseas. She opens the contact list in her phone and points out one customer, a local guy who has moved to Canada. She beats an effigy for him every year for good luck and receives payment through her WeChat account. 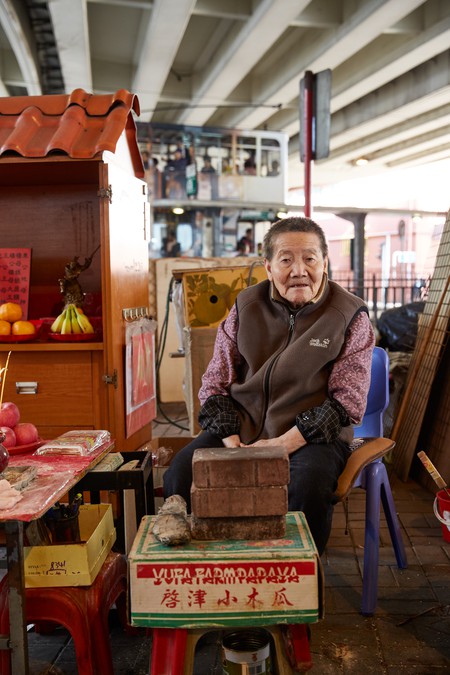 Ms. Chen, a local woman, gets into a discussion with two of the villain hitters. She compares their services and credentials, details of which are printed on the hitters’ government-issued business cards.

“I was investigating their services for my friend who had gotten into a fight,” Chen explains. “She’s now going to court and could receive a harsh sentence.” Chen’s friend wants a villain hitter to provide her with some good luck for the court hearing, but Chen is skeptical of the women under the bridge.

“It’s too cheap!” she cries. “These women are only charging HK$300 – I don’t think it can work. A good shifu [master] would charge upwards of HK$1,000.” It’s true, a small traffic island trapped between three roads doesn’t seem like a legitimate office. But Auntie Leung, one of the more seasoned villain hitters on the block, defends her $50 price tag. She accuses some of the other ladies of pushing too hard and upselling bogus packages. 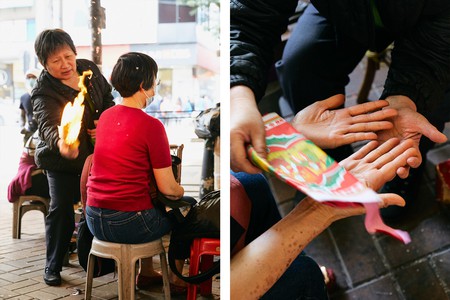 Competition among the women is fierce | © Lesley Lau / Culture Trip

With five villain hitters crowded under one bridge, competition here is steep. Villain hitters who are new to the game have to hustle. If a potential customer understands Cantonese then the hitters will start bad-mouthing the services of their competitors, talking up their own game. Each hitter performs the ritual a little differently, chanting different curses or appealing to different deities.

One of Auntie Rong’s more serious competitors is Auntie Yan. She insists that she mostly uses sorcery to help people have better luck rather than cast evil curses – but she has done that too. She recalls a time when a customer came to her to curse her husband and his mistress. “She accidentally wrote down her own birthday instead of her husband’s, and so the curse actually went to her.” 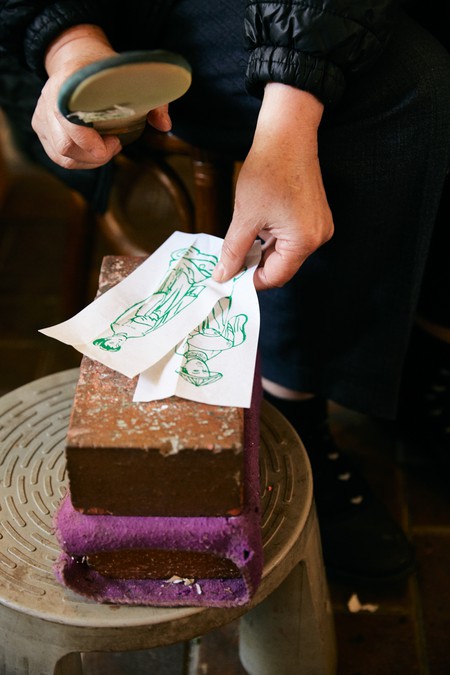 A scene from a beating | © Lesley Lau / Culture Trip

Most of Yan’s clients wish to seek revenge on cheating partners or difficult bosses, so it’s not surprising some customers are reluctant to be seen with her. “Not every client wants to sit in for the ceremony,” Yan explains. “Some give me the money and the name of their enemy and then stand away from me as I perform the ritual, pretending to wait for the bus.” Increasingly, Yan says, there tends to be a spike in business when politicians or leaders make unpopular decisions and people need an outlet to vent their frustration or anger. The amount of business the villain hitters get can often indicate how much anger there is in Hong Kong. 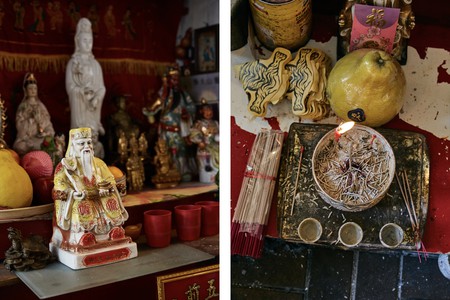 How much anger is there in Hong Kong? Ask the villain hitters | © Lesley Lau / Culture Trip

Plain old curiosity drives customers too, particularly tourists. A group of young men from Taiwan are opting for the no-thrills service from Auntie Rong, just for a taste. The sorcery isn’t practised back home. Asked whether they believe the juju works, one of the group says it doesn’t really matter whether the magic’s real or not. 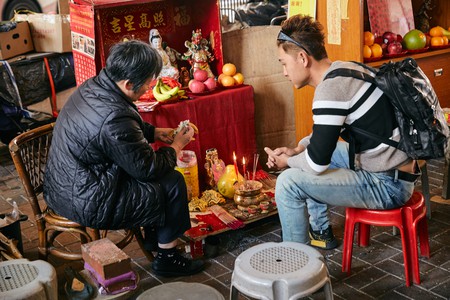 “I think it gives people a little peace of mind, and that’s what’s really important,” he says. His friend sits on the plastic stool, engrossed by Auntie Rong’s chants. She explains what villains she’s beating back and how it will help him. She makes him bow to the gods three times, clutching a joss stick in his hands. When she wafts the burning effigy over his head to disperse the spirits, his back straightens in reverence. There’s evidently a power in the ritual. 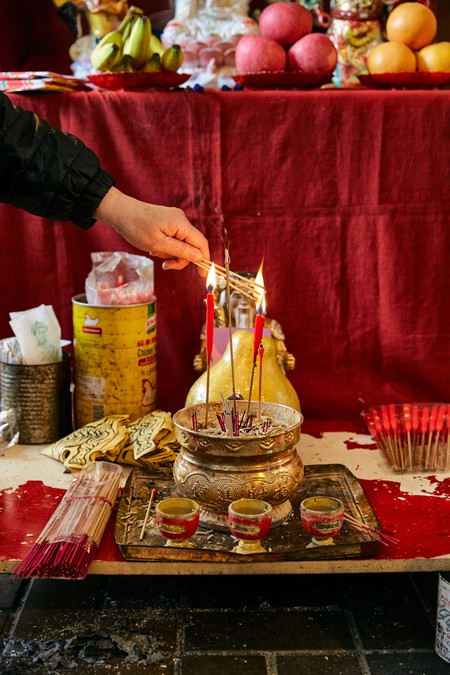 Auntie Rong is already training the next generation of hitters. She says she has two students, both in their twenties, which makes her a shifu. But Rong’s daughter, who remained home in Guangxi when Rong came to earn money in Hong Kong, isn’t interested in learning the craft.

“That’s okay,” Auntie Rong says, smiling as a bus roars through the smoke of burning effigies caught under the bridge. “This work isn’t everybody’s destiny.” 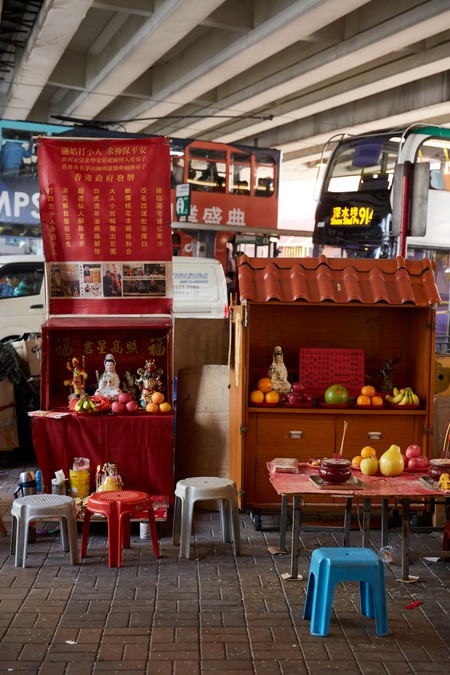 This article is an updated version of a story created by Matthew Keegan.