The magic of photography once lay in its ability to take a snapshot of reality; it, unlike painting, told the truth. Photography was unmediated, factual and carried an air of authenticity. Here, we feature five contemporary Chinese artists whose work uses the lens to challenge our perceptions of reality. 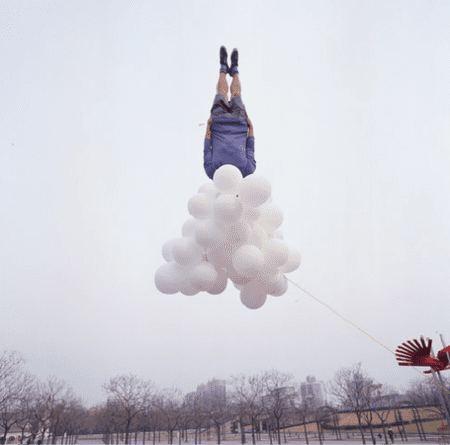 Ironically, the most apparently digitally manipulated images may not, in fact, be photoshopped at all. Whether pictured head down, floating amidst a pile of white balloons or existing in photographs as a disembodied head, Li Wei states that his images are clever compositions using mirrors, wires, scaffolding and acrobatics that combine performance art and photography. In the ‘Dream-Like Love’ series, Li turns the bedroom into a surreal comedy as his bodiless head becomes an emasculated object dependent on the woman’s whims. In ‘041-05, 2003’, for instance, Li’s female subject threatens Li’s floating head with a massive pair of scissors. The expressions on the subjects’ faces, however, cause the viewer to treat this household spat as little more than a show and, in fact, this soap-opera theatricality is present throughout his photographic works. 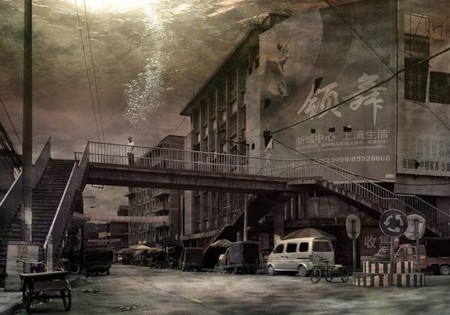 Born in Kaixian, Chongqing, Yang Yi’s photographic series of his hometown is a powerful work of remembrance. In Yang’s photographs of Kaixian, which had been settled for 2000 years, the viewer is greeted by sombre images of a town that appears dilapidated and dying. Although signs of urban life remain, the buildings are torn down, turning into rubble that will only be soon forgotten. However, Yang’s images are not merely documents of a bygone era, but also reflections of a deep emotional response to reality. In 1994, China laid the foundation for the Three Gorges Dam project, a historic feat of engineering that promised to generate massive amounts of energy to propel China into the 21st century. Yet the building of the dam also submerged numerous towns and villages, displacing some 1.3 million people. On 4 November 2008, Kaixian became the final town to be inundated by the Three Gorges Dam reservoir. In an essay entitled ‘Uprooted’, Yang writes of his mixed emotions regarding the photo series of the lost city: ‘They’re inspired by happy memories of youth, muddled with the grief of losing my childhood home. Looking back at the photos now, I find that I cherish them more than ever. I want to embrace and cling on to everything in the pictures.’ 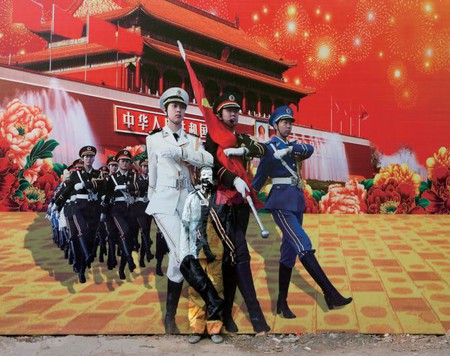 © the artist and Galerie Paris-Beijing

Liu Bolin demands the viewer look closely at the work of art. On the surface, he seems to merely take pictures of patterns and landscapes; utterly dull. Yet his works in fact disrupt our visual assumptions by inserting the artist himself into the photographic image. The artists’ self-portrait is a painterly genre with a long established tradition in the history of art; from Vélazquez to Kusama, artists have found ways to insert themselves into their works. Liu Bolin, however, does this with a twist. A master of camouflage, the artist makes himself invisible amongst well known landmarks such as the Forbidden Palace, Hollywood and the streets of Paris. Originally conceived as a protest against the plight of the individual subsumed by empty sloganeering, Liu Bolin continues to make a statement about the relation between the artist and the artwork through his photographic series. Liu has worked by eminent designers including Lanvin’s Alber Elbaz, Jean Paul Gautier, Valentino’s Maria Grazia Chiuri and Paolo Piccioli, as well as collaborating with French street artist JR.

Yang Yongliang, An Elegant Assembly of Literati, 2011. | © the artist and Galerie Paris-Beijing

Yang Yongliang’s works appear as careful mimicry of the painterly traditions of the Southern Song (1127-1279); unsurprising, given Yang’s training in traditional calligraphy and Chinese landscape painting. An Elegant Assembly of Literati, 2011 portrays, as its title suggests, a gathering of literati — the intellectual scholar-bureaucrats who were once the elites of Confucian Chinese society — involved in scholarly discussion and contemplation. As in traditional Song painting, the literati are framed by rugged cliffs and pine-covered hills. Yet our impression of this meditative work of black and grey is quickly turned upside down. The sloping mountains turn out to be covered by electricity pylons rather than unending rows of upright Chinese pine. Out in the distance, construction cranes protrude from a pile of building debris, and in the foreground, heavy equipment vehicles appear to be digging — or dumping — rubble into a heavily polluted pond. The rock formations are unmasked by the viewer as layered urban skyscrapers or dilapidated buildings. Nothing is as it seems in Yang’s works. Combining digital manipulation with his keen knowledge of traditional Chinese landscape traditions, Yang creates digitally-manipulated photo-collages that combine the idyllic with the destructive, the grittiness of contemporary urban centres with the calm sensuality of nature. 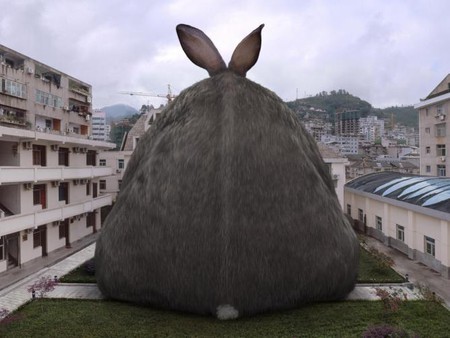 Digitally manipulating photographs, Liu Di transforms the urban landscape into a surreal playground over which massive inflated animals tower, yet are confined by their surroundings. Liu Di describes his idea for his Animal Regulation series on his White Rabbit Gallery page: ‘Looking out at the decrepit housing blocks, I had a vague but strong feeling that there was something missing between the ground and the sky’. Liu decided that the space needed to be filled by something ‘powerful and impossible to ignore, but not something that would make people panic. … Eventually I decided it should be a huge animal’. Their heads are made disproportionately small in relation to their massive bodies giving them a caricatured comedic effect. These animals — a giant inflated frog, panda, rabbit — are obviously, outlandishly, unreal. Liu’s digitally manipulated photographs distort the banality of reality to provoke the viewer to re-view his or her urban surroundings.