The biggest lake in China is six times the size of Singapore – and this bright-blue beauty is getting larger every year.

Qinghai Lake stands on the Tibetan Plateau, at 3,260 metres (10,696 feet) above sea level. It covers more than 4,500 square kilometres (91,737 square miles) in a basin that’s fed by streams and rivers, but has no outflow. It loses water only through evaporation, which makes it salty – and that in turn gives it the distinctive colour it’s named after (qing means ‘blue-green’ in Classical Chinese). 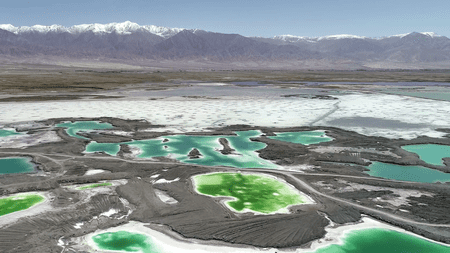 The colour is especially noticeable in the emerald lagoons that line its edge and contrast beautifully with the surrounding snow-capped mountains.

For much of the last century, Qinghai has been shrinking. But climate change has brought increased rainfall, and it’s now growing at an incredible 50 square kilometres (19 square miles) a year. That’s good news for the dragon-like monster that allegedly swims its waters, but bad news for pilgrims. Tibetan Buddhists walk around the lake, especially in the Year of the Horse (next up in 2026 and 2038), and the journey can take 23 days.

Qinghai Lake is home to several sights. Its Bird Island is an important breeding ground and migration stop, and wild geese, gulls, cormorants, sandpipers and black-necked cranes all visit. Mahādeva, ‘the heart of the lake’, has a temple and hermitages – there was once a monastery here that was only accessible during the lake’s winter freeze, since no boat was used for crossings in those days.

Elsewhere, Chaka Salt Lake offers an amazing mirroring effect, particularly in the afternoons, making for some great photos. Views of Qinghai itself can be just as photogenic, especially when great fields of rapeseed flower in summer, while the rolling dunes of Sand Island – and the famous sunsets – can be seen at any time of year.

Qinghai Lake is in Qinghai Province in northwest China. The provincial capital, Xining (itself a fascinating place to explore Chinese and Tibetan culture), is two or three hours’ drive from two of the main lakeside bases, the sightseeing village of Erlangjian Scenic Area and the small town of Heimahe.