Poems That Will Make You Fall in Love with Hangzhou 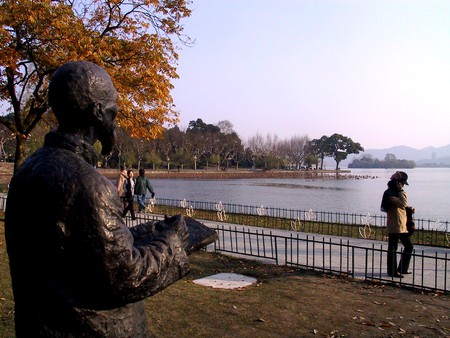 The beauty and essence of Hangzhou is the West Lake and it is no wonder that it features in the best poems and legends of the area. Without the lake, poets like Su Shi ( a.k.a Su Dongpo) and Bai Juyi would never have had a reason to be in Hangzhou (in their capacity as governors), or be inspired enough to write poems and literature. Their poetry personifies what we see from the lakeside and through their words we fall under the charm of the mistress that is the lake. Here are a few samples..

“In a hill temple in the moonlight searching for cassia buds,
In the State Pavilion, head on pillow, watching the tidal wave.
When will be the day that I shall roam again?”

Whenever Bai Juyi finished a work of poetry he would wander off to the countryside in search of simple peasants to read his poetry to. If the peasants failed to grasp the meaning he would go back and rewrite the poem. Using this method he perfected the use of simple language to convey dark themes about society and captured the essence of his longing and thirst for adventure. 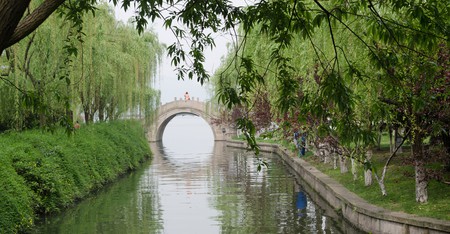 Walking in Spring by West Lake by Bai Juyi

“North of Lone Hill Temple, west of the Jia Pavilion,
The water’s surface has just smoothed, the foot of the cloud low.
Wherever you go new-risen orioles jostle for the warmest tree:
What are they after, the newborn swallows that peak at the spring mud?
A riot of blossoms not long from now will be dazzling to the eye,
The shallow grass can hardly yet submerge the horse’s hoof.
Best loved of all, to the east of the lake, where I can never walk enough,
In the shade of the green willows, the causeway of white sand.” 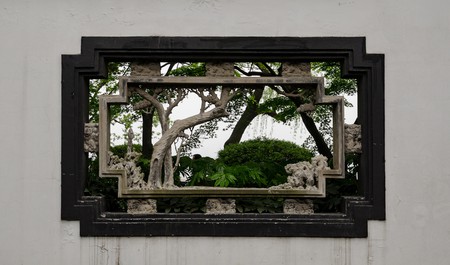 Drinking by the Lake: Clear Sky at First, then Rain by Su Hi

“The shimmer of light on the water is the play of sunny skies,
The blur of color across the hills is richer still in rain.
If you wish to compare the lake in the West to the Lady of the West,
Lightly powdered or thickly smeared the fancy is just as apt.”

It is a long held belief that the West Lake is the reincarnation of Xishi, one of the notorious four beauties of Chinese legend, whose beauty destroyed an army and brought a kingdom to ruin. The reference of Su Shi’s double entendre is therefore quite clear. Su Shi must have struggled to define clarity between the physical reality of the lake’s beauty and its other worldly sensual appeal, resigning himself to a conclusion that both, though they are the same, are exaggerated and overdone in their beauty. 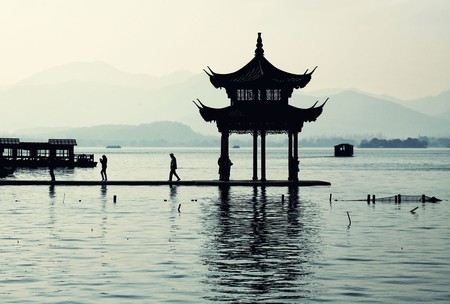 Spring Theme: Above the Lake by Bai Juyi

“Now spring is here the lake seems a painted picture,
Unruly peaks all round the edge, the water spread out flat.
Pines in ranks on the face of the hills, a thousand layers of green:
The moon centred on the heart of the waves, just one pearl.
Thread ends of an emerald-green rug, the extruding paddy-shoots:
Sash of a blue damask skirt, the expanse of new reeds.
If I cannot bring myself yet to put Hangzhou behind me,
Half of what holds me here is on this lake.”

In his tenure as governor of Hangzhou; Bai’s main achievement was his initiative to reinforce the dyke and dam the West Lake in order to provide water to irrigate surrounding farmlands that were suffering a crippling drought. Thanks to his initiative the locals thrived and their livelihoods were greatly improved. Bai went on to commission a causeway to allow locals to cross the lake on foot, this became known as Bai’s causeway, it still exists today and has become a major tourist attraction. Bai’s term as governor of Hangzhou was short lived lasting only two years from 822-824. Sensing the beginning of an end, Bai reflects on the impact of what the lake meant to him and his career as an official. Today what remains of his official career are the causeway named after him and the poetry he wrote about his life in Hangzhou. 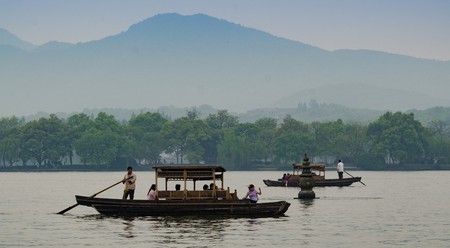 At An Inn in Hangzhou by Lin Sheng

Beyond the hills blue hills, beyond the mansions
To song and dance on the West lake when will there be an end?
Idlers fuddled on the fumes of the warm breeze
Will turn Hangzhou that rises into Kaifeng that fell.”

In 1127 Kaifeng, the Song dynasty capital fell into the hands of Jin dynasty rebels. The remaining members of the Song imperial family fled south to reestablish their dynasty capital in present day Hangzhou. Lin Sheng worries that the endless life of reveling and enjoyment around the lake will cause people to forget the splendor of their old capital. Lin Sheng is suspected to be a nom de plume for untitled poetry inscribed on the walls of old inns in Hangzhou as not much is written about his life. 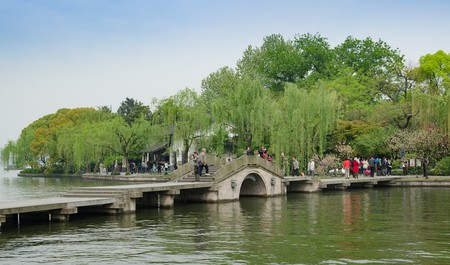 “Come, take from time the leisure’s share you will.
Semi-retirement is retirement still.
Where better could I settle and find a home
Than such a place with peerless lake and hill?”

Drinking is a recurring theme in Su Shi’s poems which are packed with vivid descriptions of life on the lake. His imagery is filled with uncertainty and cleverly invokes the imbalance of one who is inebriated. The first two stanzas of this poem can be found here which further explore the thoughts and struggles of someone who is nearing his tenure and has to leave a place he loves. 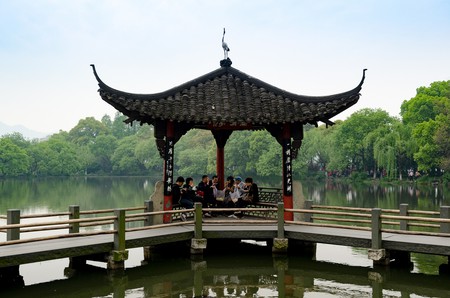 Pagoda on lake | ©Xiquinho Silva/ Flickr
Give us feedback