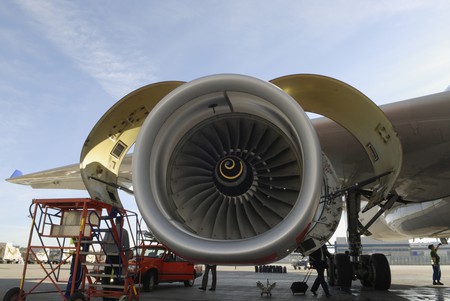 An elderly woman was questioned by police at Shanghai Pudong International Airport, after she was spotted launching change into the plane’s engine.

Passengers and crew on board China Southern Airlines Flight 380 were left waiting and dumbfounded after the woman – believed to be in her 80s – was seen throwing a handful of coins towards the engine.

Authorities were called to the scene and the superstitious woman, who was travelling with three family members, told police she hadn’t meant to cause panic, but had simply wanted to ‘bless’ the flight.

After a thorough search lasting almost five hours, mechanics recovered nine coins, one of which was inside the engine.

You might also be interested in: 7 Essential Ways to Survive a Long Haul Flight and Bring Your Favourite Drinks Through Airport Security With This Travel Hack

China Southern Flight 380 was delayed at Shanghai Pudong Int’l Airport on Tues after an elderly woman threw coins into the engine for luck.. pic.twitter.com/wSSWJg9bcE

South China Morning Post reports the captain as saying that ‘the metal, if sucked up by the engine, could have caused serious damage, including failure.’

The woman will not face charges after police concluded she threw the money to pray for a safe journey. News of the incident quickly spread across Chinese social media, with one user saying: ‘Grandma, this is not a wish fountain with turtles.’

The airline later released a statement reminding customers to avoid behaviour that could affect the safety of fellow passengers.