On the Money: What Is on Macau's Notes and Coins? 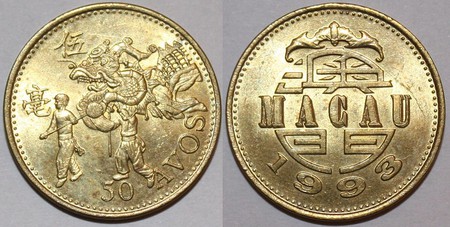 Macau’s notes and coins feature colourful imagery and reflect the city’s unique culture in which Chinese and Portuguese influences have co-existed for centuries.

First introduced in 1894, the official currency of Macau is the Pataca (MOP). It was introduced during the time Macau was a Portuguese colony, and it replaced the previous Portuguese real currency.

The Macau Pataca (MOP) is divided into 100 avos. Coins are issued by the Money Authority of Macau and take the following denominations: 10, 20 and 50 avos, and 1, 2, 5 and 10 patacas. Of the coins currently circulating, the imagery featured on them reflects Macau’s history as a place where East meets West.

On the smaller value coins (avos), it’s common to find imagery that’s strongly linked to China and Chinese traditions. For example, on the 10, 20 and 50 avos coins, you will see images of a lion dance costume head, a dragon boat and a dragon dance.

For the pataca coins, the mix of both Macau’s Eastern and Western influences becomes more evident. The MOP$1 coin depicts the Guia Lighthouse. Built in 1894, the lighthouse is one of Macau’s most famous landmarks and was the first western style lighthouse on the China coast.

Similarly, the other MOP$ coins also reflect Macau’s multicultural influences and feature imagery of both Chinese and colonial Portuguese landmarks. These include the Chinese Temple of A-Ma and one of Macau’s most beautiful colonial-style Catholic churches, Penha Church.

The MOP$5 coin features Macau’s most famous landmark, the Ruins of St. Paul’s. In addition, a traditional Chinese junk boat is featured on some of the MOP$5 coins.

For the MOP$10 coin, the historic St. Dominic’s Church is featured. The church was first constructed in the 16th century by Spanish Dominicans and became one of the first and important outposts of Christianity in Asia. Today, the brightly coloured church is still located in the heart of Macau’s city square.

Owing to Macau’s past as a Portuguese colony in China, banknotes are printed in both Portuguese and Chinese and are issued by two commercial banks, the Banco Nacional Ultramarino and the Bank of China.

This is what Macau money looks like. The higher the amount, the larger the size. #kayamahirapmagwallet #lalonakungwalangiwawallet #MacauPatacas

Similar to the coins, the imagery featured on Macau’s notes are also reflective of the city’s Eastern and Western influences. Popular Macau landmarks are featured on most notes, like the Statue of Mazu (a Chinese sea goddess for whom Macau’s most famous temple A-Ma was built). More modern landmarks like the Macau International Airport and the city’s most recently constructed bridge, Sai Van Bridge, are also featured. Other famous Macau landmarks like the Macau Tower, the Ruins of St. Paul’s and its famous Portuguese-style town square, Largo do Senado, can also be found.

Despite the pataca being Macau’s official currency, other currencies are also in wide circulation in Macau and are sometimes even preferred. These include Hong Kong dollars and the Chinese yuan.

Commemorative banknotes in Macau are quite common. In recent years these have included a special series of four million 20 pataca banknotes issued by the Bank of China in commemoration of the 29th Summer Olympic Games in Beijing.

In addition, from 2012–2023, the Banco National Ultramarino and the Bank of China are each authorised to issue a maximum number of 20 million special notes with the value of 10 patacas to mark each lunar new year.

Most recently, a MOP$10 banknote was issued to commemorate the Chinese year of the rooster in 2017. The notes feature the Bank of China headquarters building in Macau, children with fireworks outside the temple of A-Ma and an image of a rooster.