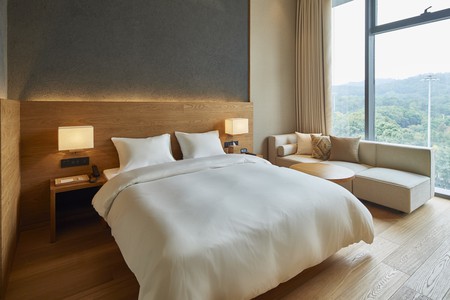 With the rise of highly Instagrammable hotels and Airbnb’s curated collection of magazine-worthy homes, people simply seem to factor in aesthetics a lot more these days when choosing a place to stay. But what if the new designer hotel wasn’t all about ‘millennial pink’ and metro tiles, but seemingly ordinary?

The mid-range trendy hotel has been on the rise for a while, with many hoteliers jumping on the millennial bandwagon. International hoteliers are now avoiding the previously sought-after ‘greige’ and instead embracing the demand for on-trend, hashtag-able interiors in a bid to curry favour with guests who are hankering after ‘character’ without the colossal price tag. 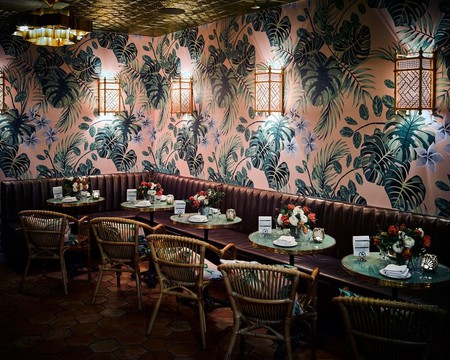 However, Japanese brand Muji, known for its functional, minimalist aesthetic, is due to open its first series of hotels, and it seems Muji is on to something. There’s not an industrial light fitting, palm-print wallpaper or powder-pink bathroom in sight – instead the brand has stuck firmly to its design principles and is more *ahem* selfie-effacing, seeking to provide ‘a physical experience of the Muji philosophy through the texture of the towels, the placement of the outlets and light switches’.

There’s something truly refreshing about its ‘anti-gorgeous, anti-cheap’ philosophy – Goldilocks might have found just the right bed to sleep in. It’s a brave, middle-ground approach to take, eschewing all trends and gimmicks in favour of honest, well-thought-out design that’s more about the details than the overall look. 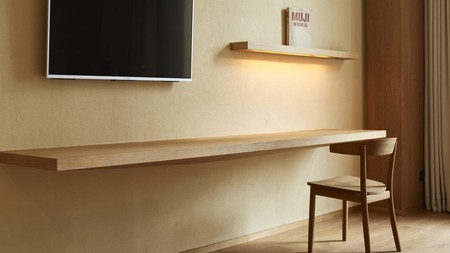 Prices start from around £100 a night ($145), with the most expensive being £280 ($385) per night for a spacious 50–60-square-metre room. ‘There are neither exorbitant prices and superfluent services, nor dreary guest rooms resulting from the extreme reduction of quality,’ the brand says. ‘We have arranged for you both a reasonably priced space in which you will sleep well, restoring both mind and body, as well as services that naturally connect you to the locale.’ 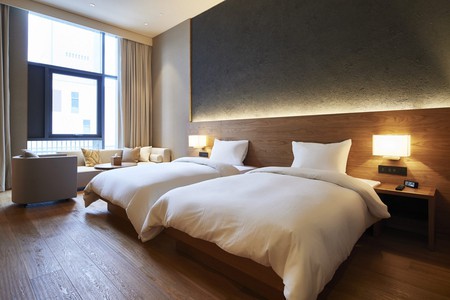 The brand’s overall ethos is to create products that are ‘really necessary’ for a ‘simple, pleasant life’ and this mindset is also evident in its hotel design, putting basic human needs first, including, quite simply, the importance of a good night’s sleep. As well as the inevitable super-comfortable bed that caters to all sleeping positions, the design mixes warm, natural materials with low-level lighting to provide a relaxing, sleep-inducing space. 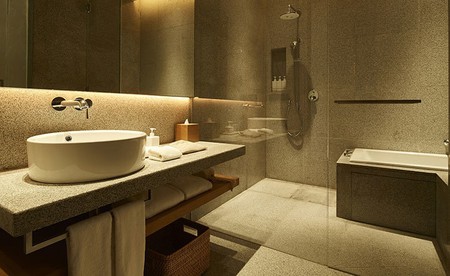 In addition, the first of the hotels to open in Shenzhen this month has a 24-hour library of 650 books for guests to borrow, but it’s also open to the general public, with the aim of encouraging travellers to connect with the local communities they’re staying in. A second outpost will be located in the old district of Beijing, which is currently seeing a rise in redevelopment, opening in March 2018. Eventually, Muji also plans to open a hotel in Tokyo’s Ginza area in spring 2019. 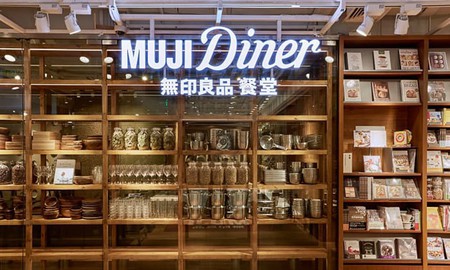 While perhaps unremarkable in a way, the new Muji hotel concept is making a statement nonetheless. With even Facebook looking to change its algorithm in order to put its users’ ‘wellbeing’ first after we’ve been mindlessly binge-watching cat videos for the past year or two, Muji is also putting interior design on a diet, with pared-back, thoughtful schemes being the order of the day. So while you might not be instantly reaching for your phone and smugly snapping your usual #bedroomgoals shot for Instagram, isn’t that actually part of the charm? Switch off, and bask in the glory of the mediocre – it’s more comfortable than you might think.