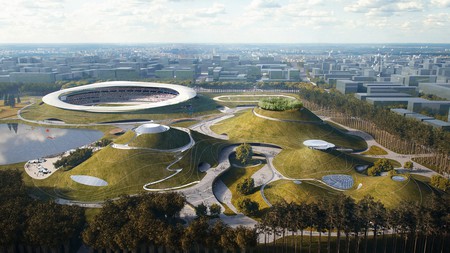 An incredible 700,000-square-metre futuristic sports park in Zhejiang Province has been designed by Beijing-based MAD Architects as an “extraterrestrial fantasy” land with a dramatic undulating landscape.

Various sports venues erupt out of ‘volcanic’ peaks across an otherworldly landscape that makes up the new Quzhou Sports Campus in Quzhou City. At its heart is a sunken 30,000-seat stadium, designed to resemble a crater, topped by a translucent ‘halo’ that gently hovers above like a floating cloud. The nearby rolling hills on the north-east side of the futuristic complex form the 10,000-seat gymnasium, swimming pool and training centre, while a huge lake sits below the stadium. A science and technology museum, a hotel and shopping complex are also being built on the campus. 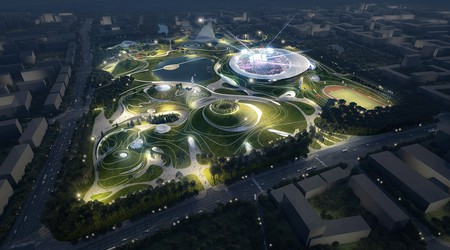 The 30,000-seat stadium is central to the extensive new sports campus | © MAD

“We dream not only of creating an urban space about sports and ecology, but also turning it into a unique land art park for the world, establishing a relationship between the city’s heritage and history of Shanshui culture,” said Ma Yansong, founder of MAD.

MAD has established a reputation for its startlingly futuristic buildings that heavily draw on inspiration from the natural landscape and traditional forms to create a new and distinctive style of modern Chinese architecture. Influenced by Japan’s Metabolism movement, Yansong’s vision for both his urban and rural projects is to serve ‘people and nature’ with a biologically inspired urbanism in which growth and change are inevitable. While urban architecture has recently dominated over nature in the country as a result of rapid development, Yansong now believes that Chinese architecture is beginning to seek harmony with its environment again, as it did hundreds of years ago. 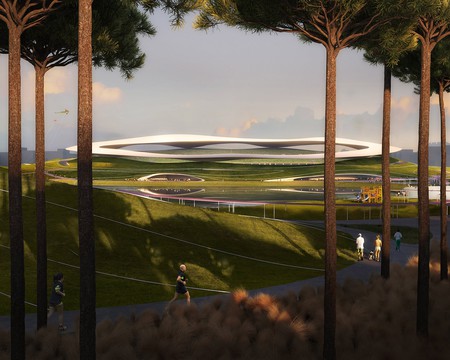 “The relationship between man and nature is not only about ecology and sustainability, but it is also about spirit and mood,’ said Yansong. “This is the culture and philosophy that has long existed in the history of this land and needs to be applied in the development of our future cities.” 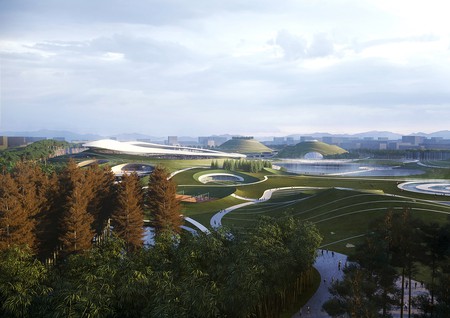 Quzhou City is deeply rooted in traditional values and philosophical ideas, which is complemented by its beautiful scenery, with more than 70% of the land covered in lush forest. MAD designed the campus so that visitors enter through the trees to be suddenly greeted by a vast ethereal landscape that reflects the surrounding mountain ranges, including the highest, Xianxia Ling. Visitors are invited to climb the hills, walk along the ‘mountain’ trails and establish a closer physical connection with their environment. The exteriors of the buildings are deliberately covered in greenery, not only for energy efficiency, but also to make them “more human-scale and accessible”, according to Yansong. All of the ‘peaks’ have skylights that flood the interiors with natural light and provide ventilation through the buildings. 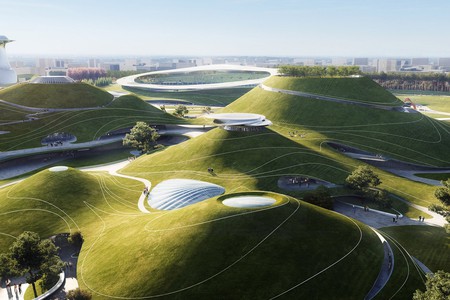 The undulating landscape is designed to look like volcanic craters | © MAD

In 2017 MAD completed Chaoyang Park Plaza in Beijing, which was also designed to be an extension of its natural surroundings, blurring the boundaries between the “natural and artificial”. Inspired by traditional Chinese landscape paintings, the tallest buildings represent mountain peaks that appear to have been carved over time by natural erosion. Another similar project underway is a domed conference centre in the mountainous region of Yabuli, which looks like a snow-capped peak appearing out of the clouds.

While the conference centre is due to be completed in 2020, ground has also broken on the Quzhou Sports Campus, which will be built in 2021 ahead of the Beijing Winter Olympics in 2022.