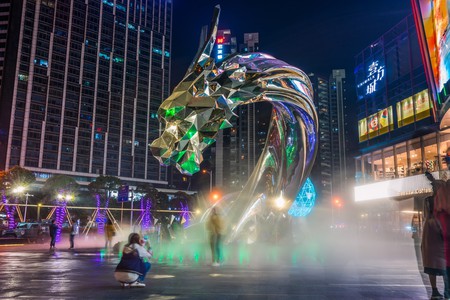 UAP bring the late Lawrence Argent’s vision of a monumental-sized dragon to life in the middle of Uniwalk.

At the heart of Shenzhen, one of China’s rising modern cities, is Uniwalk, a mixed-use development that is an emblem of contemporary Chinese vision. Wanting to capture the essence of this burgeoning metropolis, the late American artist, known for his monumental public art projects, created Beyond Reflection with UAP, who specifically work with artists to deliver creative projects for the public realm.

Talking about the concept for the work before his death, Argent said: ‘This project, like all other public art projects in which I engage, begins with the site. Like all my public art works, “site” becomes the trigger by which ideas unfold. It means building a connection with a place and the people who live in it. I try to create a resonance, a sensorial bond between people and their environment.’ 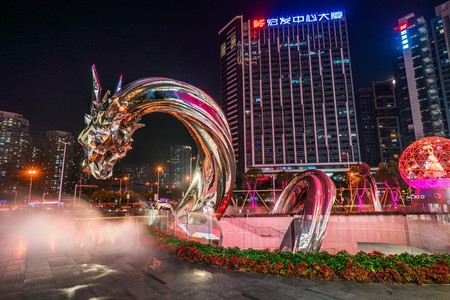 Having created major public art works in cities around the world, including a giant blue bear in Denver and a 12-metre-tall Panda in Chengdu, Argent was well versed in working to the scale of the Uniwalk project. For this audacious commission, Argent, as he had done with his previous commissions, sought to take inspiration from the city, yet ended up expanding his reference points due to the infancy of Shenzhen.

‘Interestingly, unlike many other Chinese cities, Shenzhen is a “city without history”. It went from a sleeping fishing village overnight to a modern metropolis. This really was not much to go on, so conceptually I reached more universally across the culture, looking for links that symbolized a connection to the past, unilaterally, and was potently present in people’s childhood and adulthood imaginations,’ said the artist. 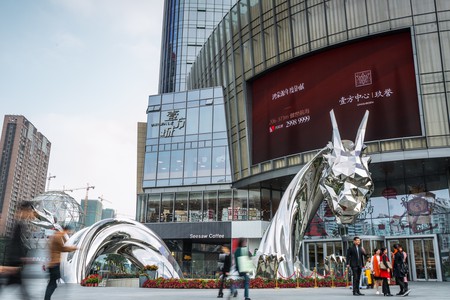 Chinese mythology and culture led to Argent’s decision to create a giant sculpture of a dragon, a creature that symbolises power and happiness.

‘The people of China have a long-held belief that they are descendants of the dragon, a tradition that is firmly embedded in their culture and one that is encountered across all aspects of Chinese society and in the minds of its people,’ said the artist in a statement about the Beyond Reflection. ‘Whereas in Western cultures dragons are usually regarded as a symbol of malevolence, in China the dragon is held in high esteem for its dignity and power for good.’ 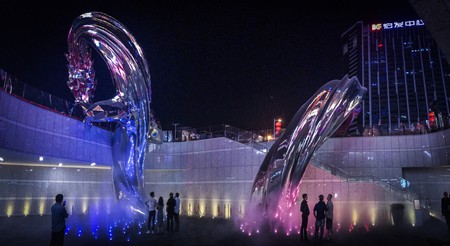 Working to the unusual characteristics of the site that covers multiple levels, including a sunken plaza, Argent devised the 16-metre stainless steel sculpture to traverse both above and below ground level.

As with his previous public art projects of animals in mid-motion, Argent allowed the sculpture’s position to extenuate the physicality of the dragon, which also appears to be in mid-flight when seen from afar due to the use of dramatic lighting and mist.

‘I felt it a wonderful opportunity to engage a vista of the form from an emergence. This would then visually connect the entrance to the mall in a significant explosion of visual excitement,’ said Argent. 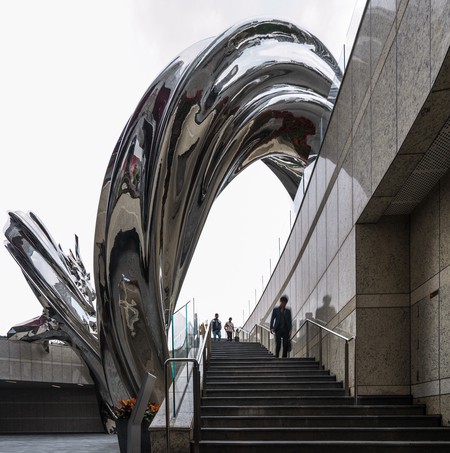 Beyond Reflection is at Uniwalk, at the intersection of Chuangye Road and Xinhu Road, Qianhai, Shenzhen, China.