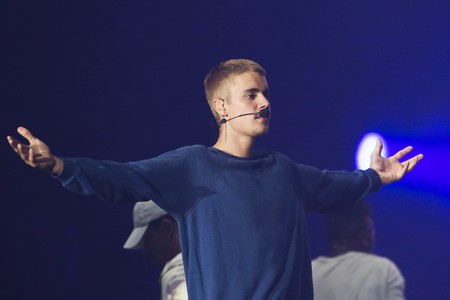 What do Oasis, Björk, Bob Dylan, JAY-Z, Miley Cyrus, Selena Gomez, Katy Perry, Lady Gaga, and Justin Bieber have in common? They’ve all been banned by China in one form or another.

Bieber being the most recent target, the Beijing Municipal Bureau of Culture released a statement explaining that the Canadian star would not be allowed to perform in the country due to his “bad behavior.”

“Justin Bieber is a gifted singer, but he is also a controversial young foreign singer,” the statement adds. “We hope that as Justin Bieber matures, he can continue to improve his own words and actions, and truly become a singer beloved by the public.”

Bieber recently added several stops across Asia to his Purpose World Tour, including one in Hong Kong on Sept. 27. However, tickets are not available on his website, and in light of the Bureau of Culture’s recent statement, it looks like it might be too late now to say sorry.

The “What Do You Mean?” singer last performed in China in 2013, when he notably had two of his bodyguards carry him on their shoulders while visiting the Great Wall of China.

This isn’t the first time Bieber has drawn the ire of an Asian nation, calling Indonesia “some random country” while detailing the experience recording his song “Be Alright” during a London event. “I recorded it in a studio. Some little place,” Bieber continued. “They didn’t know what they were doing.”

Bieber was quick to apologize to all of his fans in the Southeast Asian country, tweeting, “One rumor I wont [sic] stand for is saying what me and my fans have isnt [sic] real. Indonesia I see you. i [sic] love u. I love ALL MY FANS.”