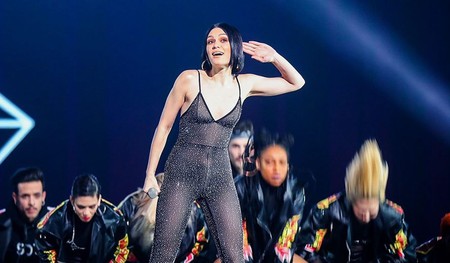 Shows like The X Factor have launched several singers and groups, including the One Direction boys, into the public eye, turning them into household names in a matter of weeks. And famous singers usually appear alongside the hopefuls as guests or mentors.

But Jessie J is turning the tables on the usual format, appearing as a contestant on a Chinese talent contest.

Yes, that’s right. A contestant. Not a judge, as she was on The Voice.

The British star, 29, is appearing on Singer, one of the biggest talent shows in China, watched by hundreds of millions.

On the show, famous pop stars compete with each other, which is why Jessie – who has sold roughly 20 million singles and 3 million albums worldwide – is allowed to take part.

The singer, whose hits include ‘Price Tag’, ‘Do It Like a Dude’ and ‘Domino’, has won a string of awards including BRITs and MOBOs.

She also performed at the Queen’s Diamond Jubilee Concert and the closing ceremony of the 2012 Olympic Games in London.

Jessie, who is up against stars from China, Taiwan, and Hong Kong, is the first English contestant to take part.

The singer told The Strait Times: ‘There’s nothing I can’t do. That’s how I feel in my heart…I’m turning 30 this year and I just think, why not? It’s an experience I’ll never forget and may never get again and I’m gonna sing like I’ve never sung before.’

China’s a lucrative market, so it makes sense that Jessie is trying to crack it. But her fans were very confused.

So, that video of Jessie J singing Whitney Houston’s “I Have Nothing” is from a Chinese singing competition show?

And she wasn’t a celebrity guest, she’s actually COMPETING?! pic.twitter.com/LjDTo0BWqM

Wait, I’m confused… Is @JessieJ now a contestant on a singing show?

I thought the whole world already know who she was?!?!

Jessie J appearing on a singing show as a contestant. That's like Arnold Schwarzenegger auditioning to be an actor again 😂

He doesn't need to, so why should Jessie have to join as a contestant on a singing show in China 😂

Jessie’s already performed her own song ‘Domino’ and won praise for her powerful cover of Whitney Houston’s ‘I Have Nothing’. She even sung in Chinese during a rendition of Prince’s ‘Purple Rain’.

She’s been doing pretty well so far and has been ranked in first place for the first two episodes.

The competition runs until April 13, so we’ll find out then if she’s got what it takes to win the whole thing.