Is China’s Tianjin Binhai the Most Breathtaking Library in the World? 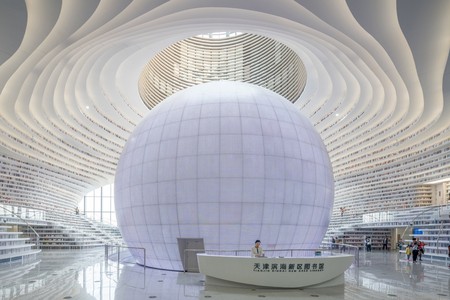 China’s new Tianjin Binhai Public Library has redefined the idea of a library with a spectacular futuristic structure that is home to 1.2 million books. It looks like something straight out of a space-age sci-fi novel.

If reading books and visiting the library were ever considered old-fashioned, it’s not anymore. China’s stunning Tianjin Binhai Public Library opened this month and is anything but the traditional dusty old building that we’re used to associating with libraries.

The five-storey public library, located in the northeastern Chinese city of Tianjin, is home to a staggering 1.2 million books. Its cutting-edge design is the work of Dutch architects MVRDV and the Tianjin Urban Planning and Design Institute (TUPDI) and took just three years to construct. 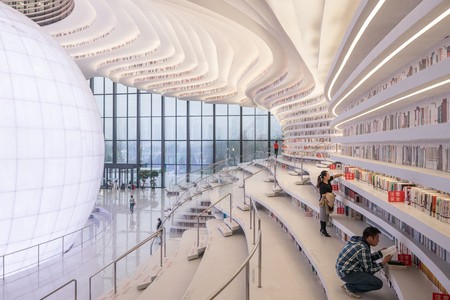 The spectacular structure, with an enormous 362,744 square feet of space, has a giant spherical auditorium in the centre that was designed to resemble a giant eye.

In an innovative and modern touch, floor-to-ceiling bookshelves cascade and are built into the walls, acting as both stairs and seating areas. The shelves undulate their way upwards, giving the impression of more space than there actually is. 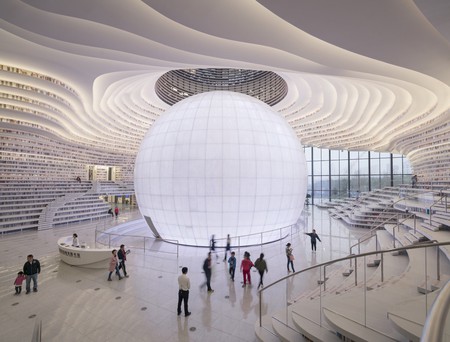 The centrepiece, “the eye”, is a giant spherical orb which houses a small auditorium | Courtesy of MVRDV

The library has a reading area on the ground floor and lounge areas in the middle sections. At the top, there are offices, meeting spaces, and computer/audio rooms.

“The angles and curves are meant to stimulate different uses of the space, such as reading, walking, meeting and discussing. Together they form the ‘eye’ of the building: to see and be seen.” 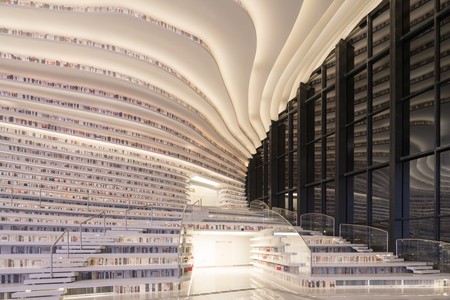 Floor-to-ceiling bookshelves cascade and are built into the walls, acting as both stairs and seating areas | Courtesy of MVRDV

The centrepiece of the building is a magnificent spherical auditorium that its creators hope will become a new “urban living room for the public”.

Since the library opened on October 1, 2017, photos of the futuristic structure have proved to be a massive hit on social media. Some netizens suggested that they would be too busy looking at the amazing architecture to read any books. 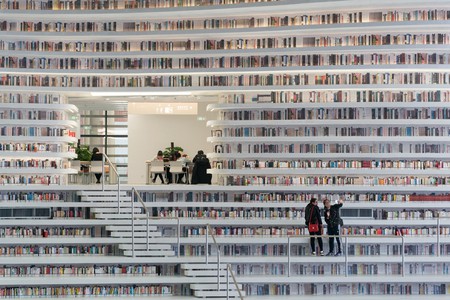 Either way, the breathtaking structure looks set to redefine the library experience, and with 1.2 million books, it’s nothing short of a bookworm’s dream.