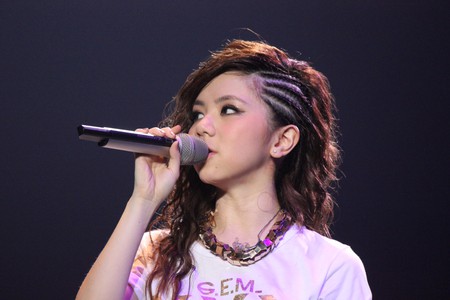 Gloria Tang Shi-Wing – known as G.E.M. (an acronym for Get Everybody Moving) – is a huge star in China and has ambitions for world domination.

It helps that she knows how to craft a catchy pop song with heartfelt lyrics.

Talking about the comparisons to Tay Tay, she told InStyle: ‘It’s such a compliment. Maybe it’s because we’re both girls, we both play instruments, and we write our own music.’

The 25-year-old, who was born in Shanghai, is currently part way through her Queen of Hearts world tour, which has dates in China, Taiwan, Singapore and Hong Kong coming up.

She debuted in 2008 with a self-titled EP but was catapulted to fame in 2014 when she appeared on the hugely popular talent contest I Am A Singer, where she ended up in second place.

Since then she’s become one of Asia’s best-selling singers, made it onto the Forbes ‘30 Under 30: Entertainment and Sports’ shortlist and regularly tops the charts in Hong Kong.

She said: ‘The whole experience is phenomenal. It’s going to be my very first song in English. I’m quite nervous.’

The singer also recently appeared on the soundtrack to Jennifer Lawrence’s sci-fi film Passengers (2016) and performed with The Black Eyed Peas.

Her hit songs include tracks like ‘Someday I’ll Fly’, ‘Bubble’, ‘Sometimes’ and ‘One Way Road’.

Just like Swift, G.E.M. likes to write about love.

She told the Mail Online: ‘I too write about heartbreak because it’s real, it’s honest, and it can’t be avoided.’

And while she’s a fan of Taylor, it’s Beyonce she calls her icon.

She said: ‘My ultimate goal is to work with Beyonce because she inspired me and motivated me at a young age. She is a goddess!

‘I went to her concert in Macau when I was so young. She blew me away with her performance. She made such a major impression on me. My favorite song of hers is “If I Were A Boy”. Of course, I like all the hits like “All The Single Ladies” too. She can do no wrong in my book.’

We’re keeping our fingers crossed for a G.E.M. and Beyonce duet one day.