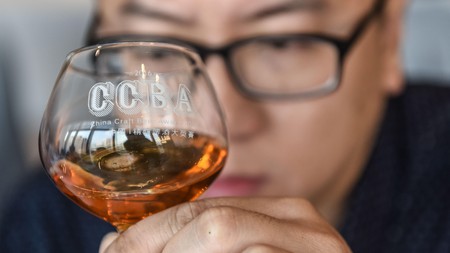 Beijing’s beer scene has grown up over the past decade and the city now boasts a lively mix of microbreweries, international pubs and cool taprooms. There is a strong home-grown brewing scene, as well as welcoming taprooms and bars affiliated with the bigger names. These are some of the best places to grab a craft beer in Beijing.

Bar, Bistro, Chinese
Facebook
Email
Twitter
Pinterest
Copy link
Share
Map View
You can’t talk about Beijing beer without giving a hearty nod and a thank you to Great Leap, whose brewmaster, Ohio native Carl Setzer, started the city’s craft beer scene when he opened its first microbrewery in 2010. Great Leap Brewing (GLB) has since grown into a massive brewing operation with four pubs. GLB continues to make some of China’s best craft beer, going so far as to source hops from Gansu province and using other uniquely Chinese ingredients such as honey and Sichuan peppercorn. Great Leap #6 is the original location in an atmospheric old hutong courtyard that requires a bit of finding, while the newer three locations boast slick bars with dozens of taps, and pub food at the #45 and Lido venues. The beer menu is immense, but a good place to begin is with the beer that started it all: Honey Ma Gold.
Open In Google Maps
Da Yue Pi Jiu ( Dou Jiao Hu Tong ) Dongcheng Qu Beijing Shi, China
Give us feedback

Started by a British Beijing resident, Arrow Factory outgrew its original alleyway location and moved into a larger venue in the embassy district in Chaoyang, with a huge rooftop terrace overlooking the Liangma river. Their most popular brews include the flagship Liang Ma IPA and the Two Birds Lager, a fresh, German-style lager, as well as ManMan Lai, a lower-alcohol session IPA the name of which translates as “take it slow”. Arrow Factory also ventures into edgier territory with the occasional lambic and barley wine, and a couple of solid stouts. There’s a big menu of pub dishes including pies, fish and chips and pizza.

Jing-A Brewing Co for barbecue with your beer

Bar, Chinese
Facebook
Email
Twitter
Pinterest
Copy link
Share
Map View
Jing-A started with two long-time Beijing residents from North America making beer at home, and has become one of the city’s best breweries. Jing-A’s unusual name (京A) refers to the first character and letter seen on Beijing number plates (jing is the second character in Beijing). They operate two pubs in the city: the Xingfucun venue also does Texas barbecue, and the newer Longfusi bar is nestled down a little hutong near Dongsi, and offers 22 taps and a selection of sourdough pizzas. Beers include the Worker’s Pale Ale, Koji Red Ale, Black Velvet Vanilla Stout and the amusingly named Airpocalypse Double IPA, which is sometimes discounted on poor air-quality days.
Open In Google Maps
Beijing, China
Give us feedback

NBeer for the biggest beer fridge in Beijing

While a lot of Beijing’s most successful craft breweries have been started by expats, NBeer is one of the city’s first and only breweries that’s Chinese-owned and -operated. Their original location in the Xintiandi building remains popular and has a huge wall of beer fridges with around 900 imported cans and bottles. They took things up a few notches by opening a huge venue in Wukesong, close to LeSports Center, the home of Beijing’s professional basketball and ice hockey teams and the site of some of the city’s best concerts. This venue has a 40-tap system, with 20 house beers. There’s a food menu as well as a display called the World Beer Bottle Museum – the owner’s collection of over 7,000 bottles from more than 70 nations.

Another all-Chinese brewer, Peiping Machine gained a loyal following almost as soon as it opened, brewing very drinkable beers that include the 100 Flowers Hidden Deep, an American-style IPA, a wheat beer, a Pilsner and a chocolate stout, along with some ciders and stronger seasonals. The industrial chic two-storey taproom at the back of Fangjia Hutong features long, bulky tables perfect for group drinking sessions.

Oh Yeah! Brewing for craft beer in the CBD

One of Beijing’s newest breweries is this slick, American-style microbrewery in the CBD. Oh Yeah! opened in 2019 with the aim of providing a relaxed environment for drinking unpretentious beer, and they’ve succeeded, at the same time as keeping the price points affordable. Oh Yeah! poured significant investment into a large, state-of-the-art brewing kit and brought in Josh Kendal – previously head brewer at Melbourne’s Colonial Brewing – as brewmaster. The most popular beers are the OYPA (an Australian-style pale ale), the Silk Road coffee porter and the American-style IPA, but they also brew a traditional Pilsner and a Belgian white. The menu focusses on Latin American food, along with pizza, and there’s a house band hailing from Cuba on stage five nights a week.

Boxing Cat Brewery for a little taste of Shanghai in Beijing

Shanghai’s Boxing Cat Brewery opened its Beijing outpost in the embassy district near Great Leap #45 and Arrow Factory, firmly establishing this as a craft beer destination district. One of the earliest craft breweries in China, Boxing Cat started in 2008, and though its beers aren’t always the most current, they are reliable and the Beijing space is airy and modern with a long beer list that ranges from their extremely drinkable core TKO IPA to the malty Ringside Red and some edgier brews such as the Thrilla in Manila Berliner Weisse. The food is also surprisingly good, with an unusual fusion of Southeast Asian and British pub grub that really works (think scotch egg with Thai curry).

One of the newer brewpubs on the Beijing scene is this cosy taproom located inside the hip 798 Art District – an area that, until Ram’s arrival, was severely lacking in a good place for a cold one. The brewers have stuck to the German Rheinheitsgebot purity laws, meaning they only use natural ingredients and a number of their offerings are German-inspired styles such as Hefeweizen, Berliner Weisse and Pilsners.