Inside the Chinese Fishing Village that Was Swallowed by Nature 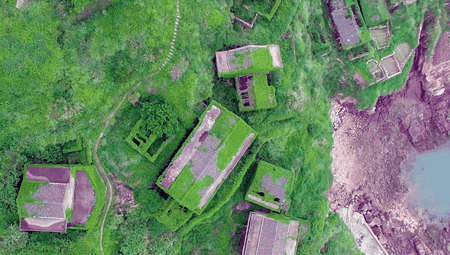 In the tiny Chinese town of Houtouwan, nature has created a lush spectacle that looks more like a movie set than an earthly wonder.

Houtouwan is located east of Shanghai on Shengshan Island, a three-mile wide stretch of land in the Pacific Ocean. Shengshan is one of almost 400 islands that make up the Shengsi Islands, and the hilly terrain is home to quite a few fishing villages, including Houtouwan. The once thriving town was established in the 1950s only to be abandoned by its population in the 1990s. 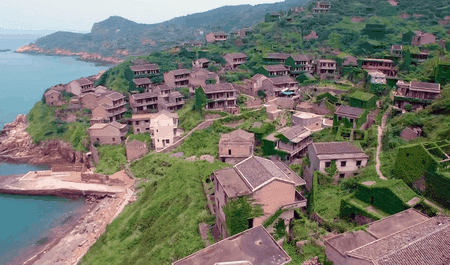 Although five of the former 2,000 inhabitants remain, the entire town and all its buildings have succumbed to nature over the course of more than 20 years, creating a stunning spectacle that attracts tourists from around the world daily. The island is easily accessible from mainland China, making it a popular stop on their itinerary.

For former residents however, the only way to get in and out of town when the seas were rough was by walking up a small winding path carved into the hillside. This, along with a port too small to accommodate the larger modern ships, and problems with education and food delivery, caused families to leave the town behind. 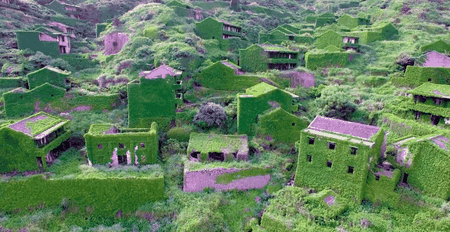 Drone photos taken from above Houtouwan showcase the village’s trademark verdant landscape; structures overtaken by bright green ivy, the ground overflowing with roots and trees, caved-in roofs and holes in walls caused by rain, wind and heavy vines. Some of the buildings are even sprouting flowers.

The current five residents include 60-year-old Lin Fazhen, who sets the record straight when asked whether or not the leafy ghost town is haunted. He told the AP: ‘I’ve lived in this world for such a long time, and have never met one [ghost], right?’