How To Spend a Week Exploring Guizhou, China’s Mountainous Outback 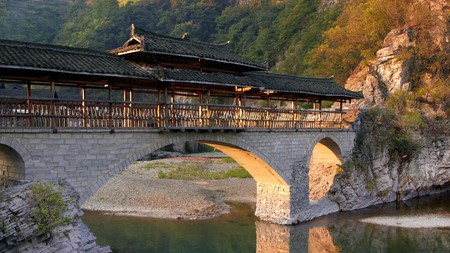 With its wealth of cultural traditions, natural sights and local customs, there are plenty of good reasons to explore Guizhou | © agefotostock / Alamy Stock Photo

Though a week isn’t long enough to see all of Guizhou’s sights, it’s plenty of time to sample what this unsung province has to offer. Here’s how to spend the perfect week in the region.

Located in China’s far southwest, the mountainous Guizhou province is relatively small compared to other Chinese provinces. It’s also less popular with visitors, but no less worth visiting. With its wealth of cultural traditions, natural sights and local customs, there’s plenty to do here and good reasons to make the extra effort to reach this relatively out-of-the-way destination.

Day one: Arriving in Guiyang

There aren’t many international flights to Guiyang, the provincial capital, so you’re likely to arrive on a domestic flight or, one better, by high-speed rail. While the railway station and airport are both on the city’s outskirts, there are plenty of transportation options to reach the city centre, including a subway system, urban buses, taxis and Didi (China’s version of Uber).

After checking in to your hotel, head for Qianlingshan Park, the city’s green lung. A rickety cable car lifts you to the top of the mountain where you’ll be treated to sweeping views of Guiyang. The pleasant walk back down to the city will lead you through a lush forest populated by wild macaques and the Hongfu Temple, a 17th-century Buddhist temple that houses a 1,500-kilogram (3,307-pound) copper bell made in 1469.

Once night falls, Guiyang becomes one big night market – Wenchang Beilu is a good place to sample local street snacks, such as siwawa (a fresh spring-roll-type wrap dipped in peanut sauce). Finish it off with a local craft beer at brewpub Trip Smith (27 Yujia Alley, off Qianling Donglu). 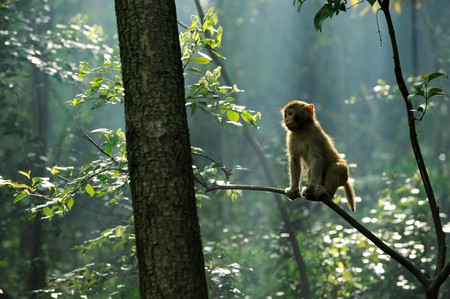 Qianlingshan Park is home to wildlife, such as macaques, and a 17th-century Buddhist temple | © Yang Wenbin / Xinhua / Alamy Live News

Take a high-speed train to neighbouring city Anshun, and then catch a local bus or taxi to Huangguoshu Waterfall. China’s largest waterfall flows from the Baishui River, splitting off into a few streams that cascade down a 77.8-metre (255-foot) drop. There is a cluster of 18 other waterfalls here and several viewing points from which to admire their grandeur. A walking path leads to the Water-Curtain Cave for a view of the falls from behind.

While not tremendously exciting, the city of Anshun makes a good base for a couple of nights, and its urban lake, Hongshan Lake, is a lovely place to stroll, especially in the evening light. 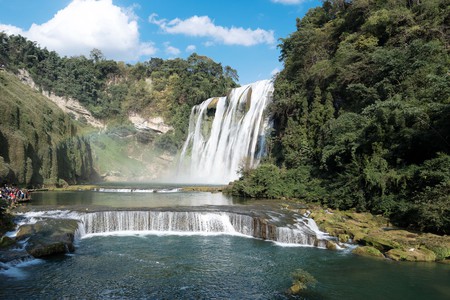 Zhijin Cave is one of the longest and biggest caves in China – a whopping 10 kilometres (6.2 miles) of karst splendour. There are stalactites, stalagmites and all manner of underground formations, most of which have been illuminated in rainbow lighting.

You have to join a tour (led in Chinese only, but there are English-language signs) that lasts two hours and saves you from getting lost in the cave’s giant complex. 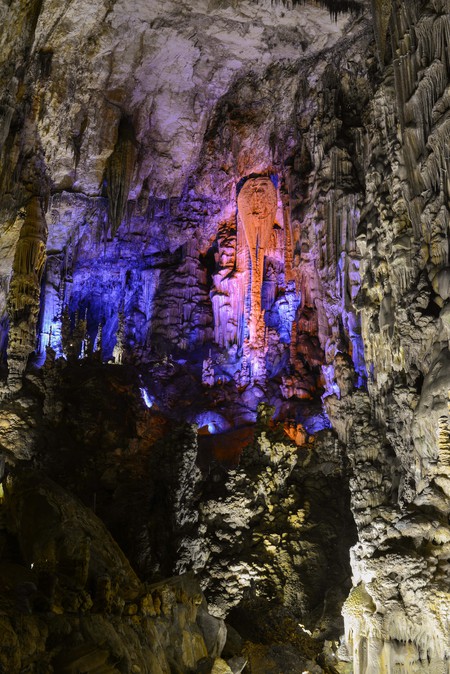 In 1935, an event that changed the course of history took place in the little Guizhou market town of Zunyi. During the Red Army’s Long March across China, they stopped to hold a meeting, and it was at the Zunyi Conference that Mao Zedong secured his place in the Chinese Politburo and began his ultimate rise to power.

There are plenty of ‘red tourism’ spots centred around the Zunyi Conference site and memorial, where you can learn more about the fateful events that took place. Zunyi is an 80-minute high-speed rail trip from Anshun West railway station. 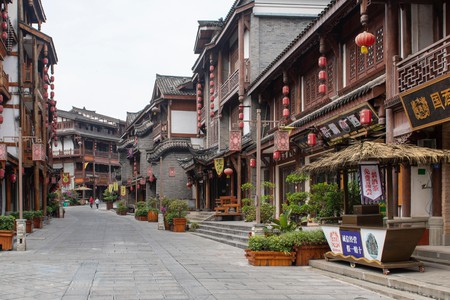 Qiandongnan is an autonomous prefecture that’s home to the Miao and Dong tribes – minority groups that are officially recognised by the national government.

The village of Danzhai makes a good base from which to explore the surrounding area. It’s also home to the Wanda Jin DanZhai Hotel, a luxury property designed to blend in with the local architectural style. Check out the Village Story shop, where you can buy crafts made by local female artists.

Hire a private driver or taxi to visit the outlying village of Shiqiao, where residents practise traditional paper-making methods by hand. In Paimo, a fog-shrouded mountain village left nearly untouched by the outside world, you can visit a traditional batik workshop and, if you’re lucky, get a lesson in how to make batik from the master-artist grandmas. 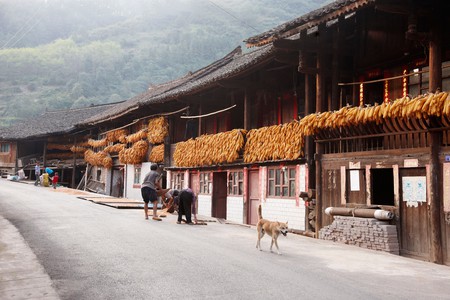 Zhaoxing is a perfectly formed village built in traditional Dong-style architecture, where wooden stilt houses teeter on the edge of a small river, and local artisans work indigo dye into long stretches of cloth.

The village is famed for its intricate tiered drum towers and wind-rain bridges (so-called for the shelter they offer from the elements). Don’t miss the Dong Culture Exhibition Centre, a thoughtful museum that presents all aspects of the tribe’s cultural heritage, from clothing and architecture to cuisine.

While still a very traditional village, Zhaoxing is friendly to visitors, and the presence of several boutique inns, cosy riverside cafés and relaxed bars make this a great place to spend a night or two, soaking up traditional Guizhou at its best. 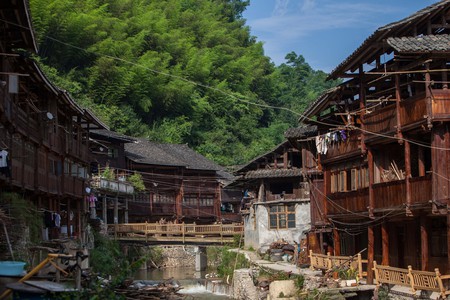 Head north to the busy Zhenyuan Ancient Town, founded as a county seat in 202 BC along the curving Wuyang River. Houses here rise in picture-perfect blocked stacks that reflect in the Wuyang’s placid green water – the best way to admire them is from an open-air boat cruise, which departs regularly from a pier on the north bank of the river.

Make sure to find time to walk through the winding laneways that lead up the town’s northern hillsides – they are full of little courtyard homes, shrines and historical inns that give a sense of what Zhenyuan was like hundreds of years ago. At night, wander along the south bank of the river, where numerous restaurants and cafés offer the perfect vantage to admire the illuminated city and river. 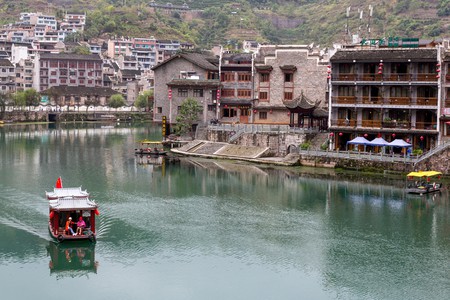 It would be tempting to stay in Zhenyuan Ancient Town forever, but if you have to be getting home, it’s easy to reach Guiyang from here – express trains take about four hours, and there are regular buses. If you’re keen to continue exploring Southwest China, the cities of Guilin, Kunming and Chengdu are only a high-speed train away. 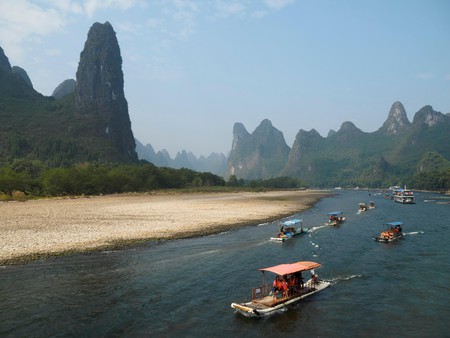 Guizhou is just a high-speed train away from Guilin, Kunming and Chengdu | © Sergio Azenha / Alamy Stock Photo
Give us feedback