How to Spend 24 Hours in Tianjin 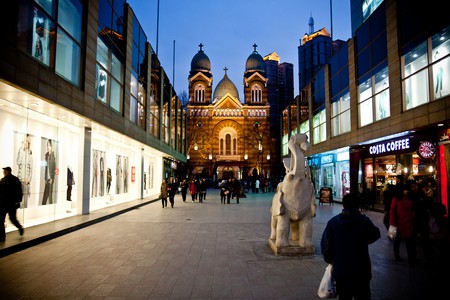 So, you only have one day to roam Tianjin and need to narrow down the dozens of possible places to explore. If you find yourself in town with a 24-hour window, you won’t have time to cover much, but you can still experience the heart and character of the city by walking historic streets and topping the day off with an unrivaled view of the entire city. Here are the things one should plan to see and do in this 24-hour guide to Tianjin.

Let’s say you’ve just arrived from Tianjin Railway Station around noon. Before you hop in a taxi, take a few minutes to take photos around the nearby pavilion. You’ll see the bridge and the Century Clock, a hallmark monument of the city. From there, hail a cab to Wuling Road and cross the bridge. Look to your right at Haihe Cultural Square, which actually is nicely illuminated at night and will be a better sight later. You won’t be able to miss the Tianjin World Financial Center in front of you.

Hopefully, you’re checking into the futuristic, cube-shaped St.Regis Hotel that’s right by Haihe River, where you can drop off your stuff and then head back out for lunch. Not far is the historical shopping center from yesteryear, the Quanyechang Bazaar where you can window shop (or buy) some souvenirs to take home. The Quanyechang Bazaar was built in the 1920s by a French architect and is a fascinating place to spend part of an afternoon indoors. You can also grab a snack if you’re hungry.

To change things up and seek out somewhere a little less hectic, travel a bit farther down the street. One of the quintessential, pastoral, and incredibly historic places to walk into while in Tianjin is the XiKai St. Joseph’s Cathedral. This is the largest and most prominent Catholic Church in northern China and dates back to the 1800s.

Now that dinner time is approaching, head back uptown to the famed Ancient Culture Street. This area is a must for visitors. Here you’ll be bombarded with the recreation of Old China with a plethora of shops and restaurants to wander into and explore. Instead of sitting down and dining in one restaurant, try sampling a few different dishes, like Tianjin’s signature steamed dumplings (Goubuli) and a few variations of barbecue with grilled meats like lamb or pork on a stick.

Time to take one last breather before the night is over at the landmark The Tianjin Eye, a gigantic Ferris wheel that sits atop a bridge: the only of its kind in the entire world. A ride on The Eye will only take about 30 minutes and, if the air is clear, will give you the most breathtaking panoramic views of Tianjin’s coastal city skyline.

To cap off the night, keep heading to the other side of the bridge where Italian Style Town is situated. This former Italian Concession has been revamped into a glamorous tourist and nightlife area, where you can find a sumptuous dessert like Tiramisu and a Martini to top it off at the Venezia Club.

Now that you’ve completed a good portion of your 24-hour journey, it’s time to head back to your hotel and rest off all the walking and sightseeing you’ve effectively done in less than a day.

Just about any hotel that you stay at will feature a grand breakfast buffet. Depending on your appetite, you may or may not be able to fit this in if your last stop in Tianjin before leaving: Nanshi Food Street, the giant mall filled with endless food vendors. At Nanshi, you can sample any kind of Chinese pastry, snack, or small meal. Try the Ear Hole Cake for breakfast. After your stint in Nanshi, give yourself at least an hour to head back up to the train station!