How Did Beijing Get Its Name? 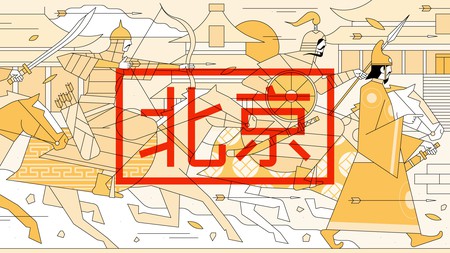 China’s capital city has been called Beijing (北京) for centuries, though it hasn’t always been the case. Riding the vicissitudes of empires and dynasties, each change in leadership left an imprint on the city, some of which resulted in a new name. Here is a brief overview of its (relatively) recent appellations.

Beijing has one of the most storied histories of any urban centre in the world – the saga of the city can seem to take on mythical proportions. And there are many stories to tell, given that this particular spot on the globe has hosted life for over two millennia. It is also one of the few cities to have held domain over such a vast geographic area; its history is a regal one. Today, Beijing is the world’s most populous capital city as well as the nation’s heart when it comes to art, culture and politics – but it’s had to withstand invasions, bloodbaths and family feuds to get there.

Dadu and Khanbalik: The Start of the Mongolian Empire

In the year 1271, during the Yuan Dynasty, the city was first anointed as a national capital. The leaders of the Mongol Empire gave it the name ‘Dadu’ (大都). The word ‘da’ (大) literally translates as ‘big’, but can also be interpreted as ‘huge,’ ‘strong’, or even ‘elder’; one English translation of Dadu is ‘Great Capital’.

Khanbalik, or ‘City of the Khans’, was the city’s Mongolian name, and both were used interchangeably. The name Khanbalik could be rendered in English as ‘City of the Ruler’, which would be fitting given that Kublai Khan, the ruler at that time, resided in Dadu.

Towards the end of the Yuan dynasty, agricultural difficulties, economic problems and high levels of taxation stirred resentment between the Mongolian rulers and the Han Chinese. This resentment culminated in a rebellion led by Hongwu. He took over the strategically important Yangtze River and sent an army up to conquer Dadu.

When Hongwu became the first emperor of the Ming Dynasty (1368-1644), he moved his administrative capital to Nanjing. Dadu was uncomfortably close to the northern edge of the country; just across the border were the former rulers. After having kicked out the Mongols, the Ming court determined that a bit of distance might be beneficial.

Since Nanjing was now calling the shots, it would not be fitting to have the former empire’s base hold as haughty a name as ‘the Great Capital’. So, the site was renamed as more modest Beiping (北平), or ‘Northern Peace’. The name may also have expressed hopes that the north would remain peaceful and that the fierce Mongol army would not try to spark another invasion.

The name Beiping was to be short-lived. Emperor Hongwu bestowed the land capital upon his eldest son, Zhu Biao, who later passed it on to his son, Jianwen. However, the young crown prince was a tyrannical ruler. He began to execute and demote his uncles. Fearful of these developments, Yongle, uncle to the crown prince, plotted to overthrow his nephew. He built up a military and sparked a civil war that lasted three years. Uncle and nephew fought against one another until there was only one head of the city — Yongle won.

Yongle was to become an even more ruthless ruler. The uncle burned his nephew to death and anyone who opposed his claim to the throne was killed, executed or dismembered. In 1403, Yongle transferred the country’s capital from Nanjing and renamed the city Beijing 北京, meaning ‘Northern Capital’. Perhaps, given the bloodbath that ensued after his ascension to the throne, the name ‘Northern Peace’ didn’t quite fit the times.

Peking or Beijing? Beiping or Peiping?

The spelling of ‘Peking’ versus ‘Beijing’ reflected the wide range of pronunciations being used by different dialects. From its earliest days, China has been a linguistically rich place. When the name of Peking/Beijing was first used, the Nanjing dialect of Chinese was the lingua franca. This yielded a slightly different pronunciation than the standard Mandarin that is used today.

The name Beiping is also be seen transliterated as Peiping. That is because there was no singular system of romanized Chinese used in that era. Instead, there were several writing systems. An internationally used, standard spelling system developed by Chinese linguists would not appear until several centuries later, in the 1950s.

In 1943, the US military reached out to Yale University to help them develop a romanization of Mandarin Chinese to be used by air force pilots. It has since become the most widely used system of Hanyu Pinyin. The final draft of the writing system was approved by the National People’s Congress on February 11, 1958. It was then introduced into the nation’s primary schools and used in textbooks for foreign learners of Mandarin.

This is an updated version of a story originally created by Julianna Tetreault.