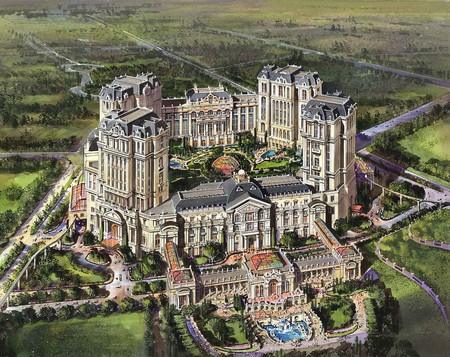 The US$4.6 billion Grand Lisboa Palace will open in the southern Chinese city of Macau in 2018. The resort will house three hotel towers, two of which will be designed by top fashion designers Karl Lagerfeld and Donatella Versace.

Macau is no stranger to new hotels openings, as dozens of multi-billion dollar resorts have opened in the southern Chinese city over the past decade to accommodate the boom in tourist numbers now visiting the world’s largest gambling hub.

However, two hotels that look set to steal the show will be designed by acclaimed fashion designers Donatella Versace and Karl Lagerfeld.

Expected to open in the second half of 2018, Grand Lisboa Palace, will comprise 1,400 rooms across three 20-storey hotel towers. 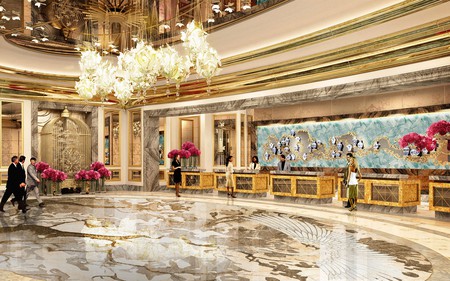 A rendering of the lobby at Grand Lisboa Palace Hotel, scheduled to open in 2018. (Photo: Courtesy of SJM)

Of its three hotel towers, one will be home to the world’s first hotel designed by fashion icon Karl Lagerfeld – the creative director of Chanel and Fendi, and one of the most recognised designers in the world. Meanwhile, Versace is set to open the first Palazzo Versace in Asia at the resort, too, with hopes of replicating the success of its hotels in Australia and Dubai.

This is the first time that Lagerfeld and his team have designed an entire hotel. The Karl Lagerfeld Hotel will comprise up to 290 guest rooms and suites in a 20-storey exclusive tower as part of Lisboa Palace. Among its features will be an enormous sculpture of Lagerfeld’s pet cat ‘Choupette’ at the entrance, while Lagerfeld’s own silhouette graces the room keys. 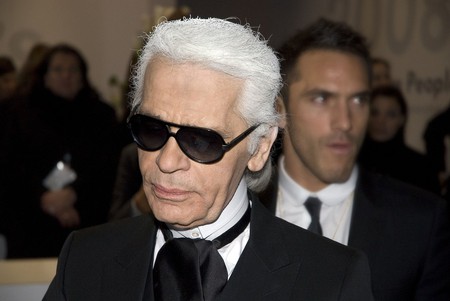 The world's first Karl Lagerfeld Hotel in Macau will feature a sculpture of Lagerfeld’s pet cat 'Choupette' at the entrance, while Lagerfeld's own silhouette graces the room keys. | © By Siebbi/Wiki Commons

‘Karl wanted to deliver something that was really bespoke for the Chinese audience whilst still bringing his influence to the table’, explains Pier Paolo Righi, CEO and President of Karl Lagerfeld, in a press release.

‘The interiors are inspired by China combined with European Art Deco. The idea was to work with architects and make sure things were elaborate and ornate so that we can bring these two worlds together in a very bespoke fashion’, says Righi.

Similarly, Palazzo Versace Macau will also be housed in a separate 20-storey exclusive tower within the Grand Lisboa Palace resort. Versace will provide the stylistic and artistic direction including the interiors, furnishings and amenities for the project.

The hotel is set to consist of up to 290 rooms and suites, one gourmet restaurant, a cutting-edge spa, indoor and outdoor swimming pools, retail space and other luxury facilities and amenities consistent with the Palazzo Versace style. 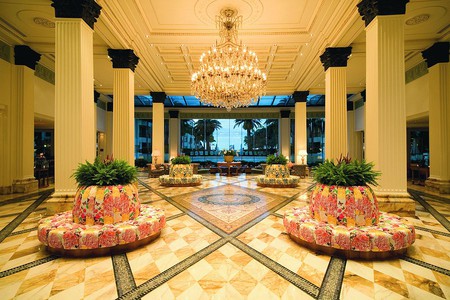 Lobby of the Palazzo Versace, Australia gives an indication of how the Macau property will be styled. | © Gscarborough/Wiki Commons

As Gian Giacomo Ferraris, CEO of Versace, explains, ‘Palazzo Versace will enrich Macau with a unique property aiming to provide an exclusive experience and become a destination within a destination’.

By comparison to the Lagerfeld hotel, Versace’s design is relatively toned down but still makes a statement with gorgeous mosaic tiles that create a mélange of colour in the pool and a lobby decked out in gold trim and white marble.

Both designers feature Chinese elements in their designs, with Lagerfeld weaving in phoenix and peony emblems, and Versace focusing on dragon and chrysanthemum details.

‘I am very happy and proud to work on such a great project: An entire hotel designed by me. It’s the first time for me! I think the idea is great!’ said Mr. Karl Lagerfeld in a press release.

Lagerfeld and Versace are among a growing list of designers and luxury brands to have branched out into hotels, one that includes such names as Giorgio Armani, Bulgari, Ralph Lauren and Baccarat. 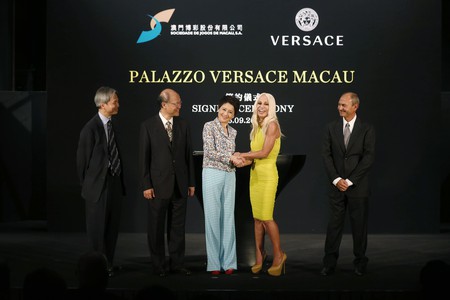 Donatella Versace attends a press conference in Macau after signing on to design a hotel for the Grand Lisboa Palace resort. Photo: Courtesy of SJM.

When it opens in 2018, the Grand Lisboa Palace will comprise a full range of non-gaming facilities including around 1,400 hotel rooms housed in The Lisboa Palace Hotel, Palazzo Versace Macau and Karl Lagerfeld Hotel.

Overall, the design theme of the Grand Lisboa Palace aims to celebrate Macau’s heritage as a place where East meets West. The architecture is inspired by landmark European buildings, such as the Louvre, Palais Garnier, Chateau de Versailles, Hotel du Louvre and the Monte Carlo Casino, as well as incorporating both traditional Chinese motifs and elements of Chinoiserie. 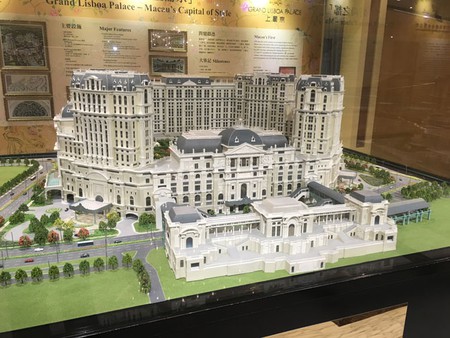 A scale model of Grand Lisboa Palace set to open in Macau in 2018. Photo: Courtesy of SJM Holdings Ltd.

Other facilities will include a number of gourmet restaurants, a themed retail mall with further food and beverage options, a wedding pavilion and a multi-purpose theatre for celebrations and events. The resort will also provide up to 700 gaming tables and over 1,200 slot machines.