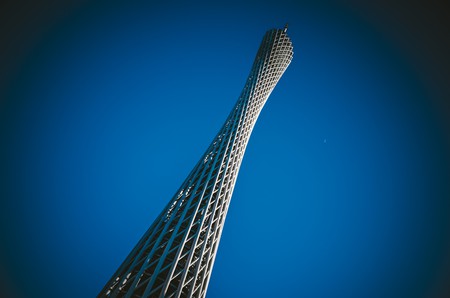 Guangzhou, the third largest city in China and capital of the Guangdong region, is a bustling metropolis located near the beautiful and mysterious Pearl River Delta. The birthplace of Cantonese cuisine, Guangzhou’s culinary offering has become synonymous with Chinese food. Our guide to eating out in Guangzhou showcases the best cultural restaurants in this fascinating, historic city. 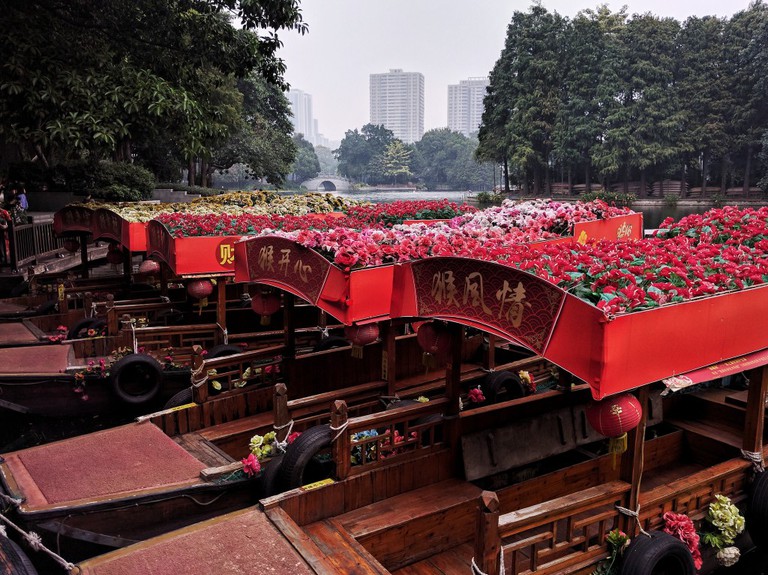 Flower Topped Boats at Li Wan Lake Park | ©Hauke Musicaloris/Flickr
Situated by Liwan Lake, Panxi Restaurant is one of a handful of famous old-fashioned garden-style restaurants that offer the quintessential Cantonese dining experience. Established in 1947, the restaurant is built on what was once a Southern Han Dynasty imperial garden, complete with banyan trees and weeping willows scattered around. This prestigious restaurant deftly brings together traditional Chinese architecture, historical artefacts, picturesque surroundings and award-winning, affordable, Cantonese cuisine. With its elegantly landscaped gardens, rock gardens and water features inside the complex, and a sanctuary-like atmosphere (one tearoom is even housed on a floating houseboat) Panxi is the perfect place to sample the fresh flavours of Cantonese cuisine. Be sure to make reservations to avoid a long wait.
Open In Google Maps
151号 Long Jin Xi Lu, Zhong Shan Qi Ba Lu, Liwan Qu Guangzhou Shi, Guangdong Sheng, China
+862081721328
Give us feedback

Restaurant, Chinese, Asian
Facebook
Email
Twitter
Pinterest
Copy link
Share
Map View
Located at the Mandarin Oriental hotel in the heart of the city, Jiang by Chef Fei is a high-class establishment serving cutting-edge Chinese cuisine. Headed by Chef Fei, an acclaimed young Chinese chef, this restaurant serves impressive riffs on traditional Cantonese cuisine, marrying simple, seasonal ingredients with creative flair. This inspired approach to fine dining makes Jiang by Chef one of the most exciting restaurants in the city, raising the whole culinary scene to international standards. The luxurious interiors and private areas certainly give the dining experience a touch of class, but it is the food that shines here, with sumptuous flavours such as the tender, fried sirloin with chilli, and impeccably prepared dim sum; the delightfully shaped birds and eggs in nests bring this culinary art to a whole new level.
Open In Google Maps
389号 Tian He Lu, Tian He Zhong Xin, Tianhe Qu Guangzhou Shi, Guangdong Sheng, China
Visit Website
Give us feedback

Bar, Chinese
Facebook
Email
Twitter
Pinterest
Copy link
Share
Map View
This small but popular eatery has recently undergone a renovation, cementing its reputation as one of the best places for innovative Western cuisine and romantic ambience. Housed in a beautifully restored colonial-era villa, with a new bar on the ground floor and an expertly tailored cocktail menu to match, Wilber’s offers an elegant and modern setting for a relaxed meal in Guangzhou. The main dining area is on the first floor, serving a regularly changing menu of delicious Italian delicacies, such as squid ink pasta. Wilber’s also serves afternoon tea, with a modern approach, and their homemade desserts are highly recommended. To top it all, you can dine in the wonderful, leafy patio area, or take in the view on the peaceful, rooftop veranda, cocktail in hand.
Open In Google Maps
Mei Hua Bei Lu, Yuexiu Qu Guangzhou Shi, Guangdong Sheng, China
+8613416134564
Give us feedback 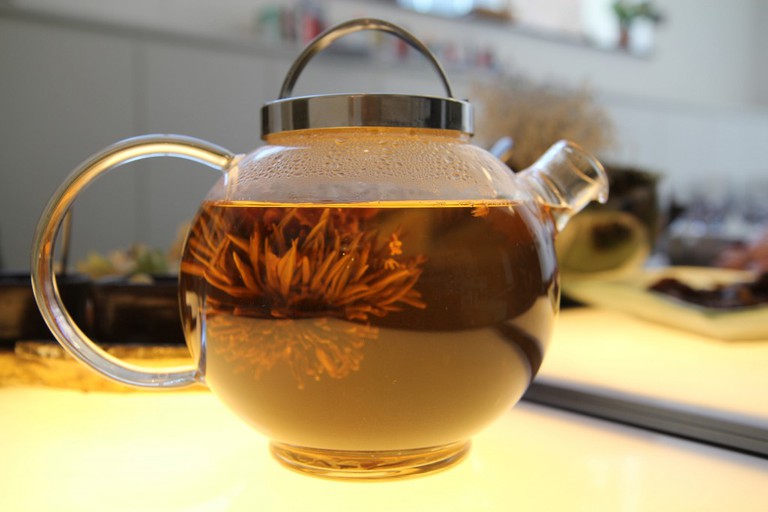 Tea | ©foam/Flickr
La Seine has earned a reputation for being the premiere French restaurant in the city, offering authentic nouvelle cuisine and a tranquil, cosy experience. With a purple and cream designer interior and an open kitchen, La Seine exudes elegance, where the food is uncompromisingly French, both traditional and contemporary, and an extensive wine list to match. The discerning gourmand will appreciate the variety of creative flavours on offer, with dishes such as baked escargot, homemade foie gras and pan-fried goose liver with fig red wine sauce. The incredible desserts and cheeses help to round off the experience. With its location on the banks of the Pearl River, in the Xinghai Concert Hall, La Seine is the perfect place to escape to for some French fine dining.
Open In Google Maps
33 Qing Bo Lu, Yuexiu Qu Guangzhou Shi, Guangdong Sheng, China
+862087352531
Give us feedback

Diner, Restaurant, Chinese
Facebook
Email
Twitter
Pinterest
Copy link
Share
Map View
The Oakroom is the signature restaurant at the Oakwood Premier, the luxury apartment complex in the heart of Tianhe, the nexus of the city’s business district. It is the epitome of laid-back luxury, with a lounge-style feel, and award-winning service in 2013. With elegantly designed interiors, which are both opulent but understated, and beautiful views of the city from its 16th floor position, the restaurant guarantees an excellent experience. The cuisine is similarly delightful, with its combination of Chinese and European gastronomy prepared by internationally trained chefs. Temptingly, there is an All You Care to Drink wine promotion from 7–9 p.m, as well as a range of special innovative schemes such as Customer Chooses the Price, where the diner pays how much they think the meal is worth, which is a bold statement of confidence in the quality of their food.
Open In Google Maps
28号 Ti Yu Dong Lu, Tian He Zhong Xin, Tianhe Qu Guangzhou Shi, Guangdong Sheng, 510620, China
+862038833883
Visit Website
Give us feedback 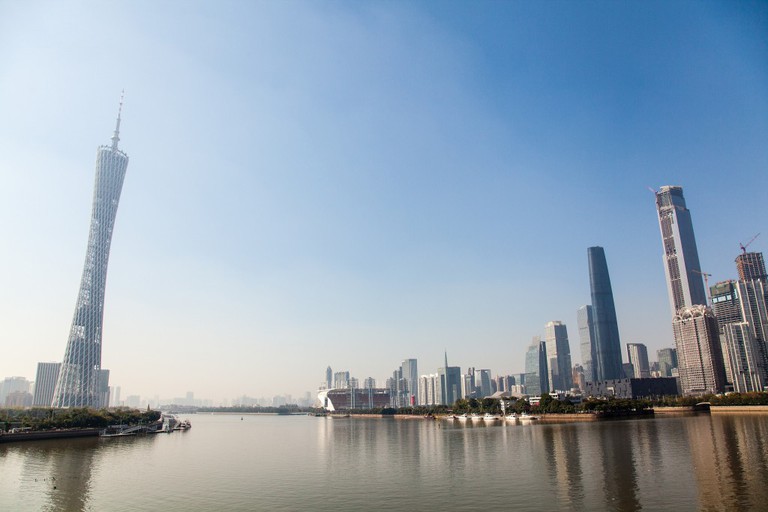 Guangzhou Skyline, Canton Tower (Left) | ©Terry Y M LIU/Flickr
Sitting on the 105th floor of the magnificent Canton Tower, which was the tallest building in the world from 2009 to 2011, Le Lutece is a revolving restaurant that offers spectacular panoramic views of Guangzhou. The glass-enclosed restaurant is particularly romantic at night, with an open and modern interior to match the city lights on view. All of this is complemented by the culinary skills of the French chef Philippe Uzan, who conjures the most wonderful, award-winning French creations that look as good as they taste. Expect French staples such as foie gras, lobster bisque and gorgeous desserts. As well as these, the Trilogies menu is a unique and creatively presented tasting menu, where up to 16 different flavours can be sampled. Chef Philippe’s constant experimentation with local flavours and ingredients brings forth intriguing dishes such as snails in soy sauce and frogs legs in five spices. Such passion and constant innovation makes Le Lutece one of the leading lights of contemporary cuisine in Guangzhou.
Open In Google Maps
Haizhu District Guangzhou, Guangdong Province, China
Give us feedback 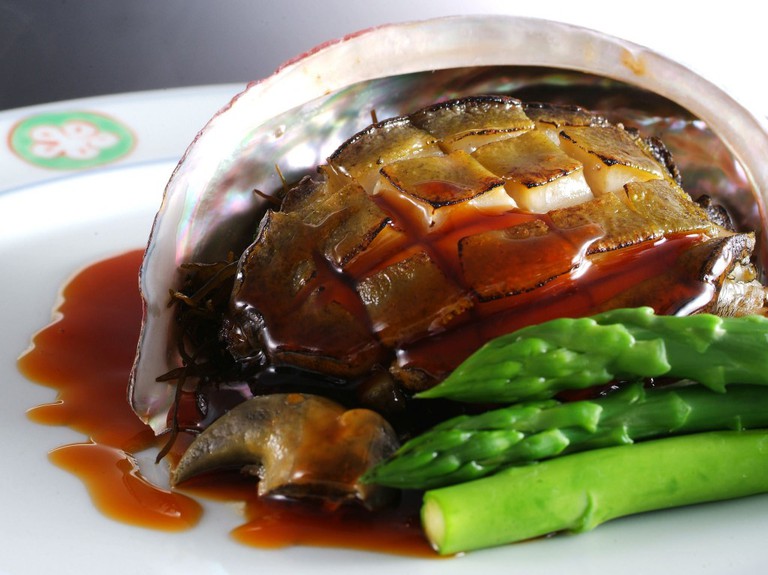 Abalone | ©Nishimuraya Kinosaki Onsen/Flickr
This restaurant is spectacular to behold – a white, colonial-style lakeside mansion on an island in Liuhuahu Park, it is worth a visit for this fact alone; the décor is similarly grand, designed in classical Chinese style. Tang Yuan is another garden-style restaurant that serves high quality, traditional Cantonese cuisine, with abalone and roasted mackerel on the menu, as well as the restaurant’s signature dish, roast pigeon. Of course, dim sum and roasted meats are reliable choices here. Another highlight that makes Tang Yuan stand out is the fact that you can have your dinner on one of the dinner boats, which evokes the Qing dynasty entertainment of boat-based banqueting. If you would like to take advantage of this floating dining experience, be sure to book in advance.
Open In Google Maps
Tang Yuan Jiu Jia ( Liu Hua Dian ) Yuexiu Qu Guangzhou Shi, Guangdong Sheng, China
Give us feedback

13FACTORIES, which takes its name from the area of town where it is located, is a wonderful hidden gem, tucked away behind the Sinopec building in the Tianhe business district. It serves good, old-fashioned Southern American fare such as pulled pork sandwiches, mac and cheese, jambalaya, Southern fried chicken and gumbo. They pride themselves on using the freshest of ingredients, with no MSG, and making everything from scratch – including their bread and pie pastry. This is honest, hearty comfort food at its best, which makes it no surprise that it’s so popular with expats and tourists looking for a break from Chinese food.

The beautiful island of Shamian, in the centre of Guangzhou, is a historically significant area full of colonial-era architecture and broad, tree-lined boulevards. And with its traffic restrictions, it feels a world away from the commerce of the rest of the city. Orient Express, conveniently located on the east of the island, is one of a handful of restaurants in the area. Surrounded by a large garden, this place oozes vintage charm, with a large dining room, a beautiful area for alfresco dining and two train wagons for added quirkiness. The menu consists of well-cooked, classic French cuisine, presented with a modern flourish, including dishes such as Bourgogne snails, grilled Australian beef filet mignon with red pepper, and pan-fried goose liver with strawberries. The restaurant’s enchanting atmosphere makes it a wonderful place to stop for a bite during a relaxed day of sightseeing. 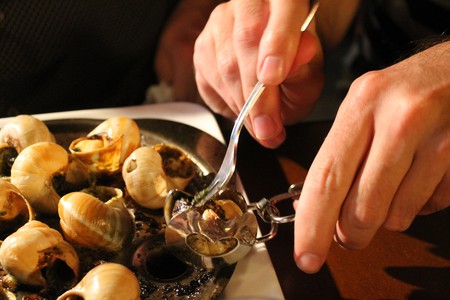 Restaurant, Chinese
Facebook
Email
Twitter
Pinterest
Copy link
Share
Map View
Built in 1880, Taotao Ju Restaurant is one of the oldest, and perhaps the most famous, Chinese restaurant in the city. This four-storey establishment is always packed and is best known for its dim sum, served at food counters on each floor and uniquely available throughout the evening. The restaurant serves authentic Cantonese fare, with an extensive menu of over 200 dishes, including its signature dish, tao tao ginger and shallot chicken. Most notably, the restaurant has a rich legacy, having served celebrated individuals such as Lu Xun, a leading figure of modern Chinese literature, Liu Haisu, a prominent 20th century painter, and Ba Jin, one of the most important Chinese writers of the last century. Don’t miss the restaurant’s calligraphy name plaque, which has pride of place in the front lobby, and was written by Kang Youwei, a prominent Chinese scholar and political reformer of the late Qing Dynasty.
Open In Google Maps
Hua Cheng Da Dao, Tianhe Qu Guangzhou Shi, Guangdong Sheng, China
Give us feedback
Give us feedback