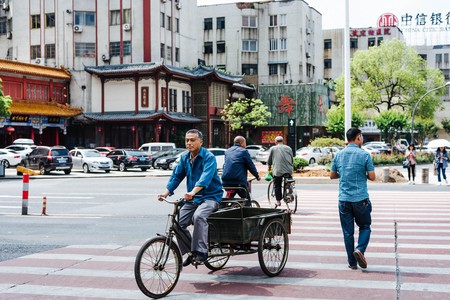 In the Chinese trading town of Yiwu, a Muslim immigrant community has found a place to thrive. The city’s many halal restaurants, Arabic signboards, and grand mosque are a testament to the growth of the foreign community, which includes business owners, traders, and entrepreneurs from countries like Yemen, Syria, Iraq, and Egypt. Here’s a look at this fascinatingly multicultural city.

Yiwu, a city of 1.2 million, is located in Zhejiang province in eastern China. It’s often called “China’s wholesale capital,” and is also sometimes known as “Christmas Town,” because it manufactures and exports 60% of the world’s Christmas decorations, as well as party supplies, plastic toys, electronics, and more.

A post shared by Alexandra Lamontagne (@alexandralamontagne) on Jun 25, 2017 at 7:17am PDT

Taking advantage of Chinese immigration laws aimed at attracting skilled workers, wealthy migrants and business owners from Arab countries have carved a space for themselves in Yiwu, transforming the city into a cultural melting pot where Chinese and Arab cultures meet.

In 2012, there were an estimated 35,000 Muslims in Yiwu, hailing from countries like Yemen, Syria, Afghanistan, Iraq, Jordan, and Egypt. There’s also a sizable population of non-Arab foreign migrants from India, Russia, South Korea, and Malaysia. Yiwu’s foreign community enjoys a good relationship with city officials, and the local government hosts official celebrations for festivals like Eid (the end of Ramadan, the Muslim holy month), and Diwali, the Hindu festival of lights.

The city’s foreign community is generally well-educated and business-savvy. Many are business owners who run their own factories or companies, and some work as traders, selling Yiwu’s goods back to their own countries.

However, Yiwu doesn’t just represent a business opportunity, it’s become a refuge for those looking to escape from the chaos of their native countries. In 2016, over half of the temporary residence permits issued by the Yiwu government were given to people from war-torn countries in the Middle East.

That said, for all its positives, Yiwu is not Eden for migrants. Many foreigners are wary about their long-term prospects in China because the path to permanent citizenship seems out of reach. In order to apply for permanent residency, candidates need to have lived in China for four consecutive years, draw an annual salary of at least 600,000 RMB (US$87,000), and pay an annual income tax of over 120,000 RMB ($17,000). In 2016, only 1,576 foreigners obtained permanent residency in all of China.

Then there’s the fact that the Chinese economy is changing. In recent years, Yiwu’s exports have fallen, and the city is trying to restructure its economy. In addition to exporting commodities, it’s slowly starting to import goods from other countries to meet domestic consumption. Of course, the city’s foreign community will have to change along with it, in order to gain a foothold in a rapidly transforming world.