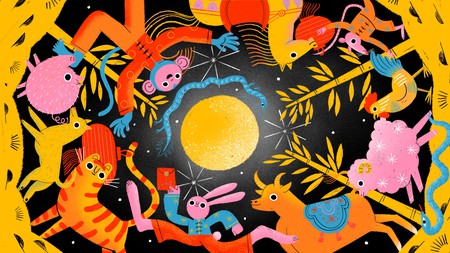 Chinese celebrations marking the start of the Lunar New Year last a fortnight, during which revellers paint the town red – quite literally – for 15 days of feasts, firecrackers and festivals. Why? Culture Trip explores the origins of this tradition as we ring in the Year of the Pig.

Unlike the fixed new year of the Gregorian calendar on 1 January, the new Lunar New Year is celebrated on a variable date somewhere between late January and early February, determined by the appearance of the new moon. In China, where the holiday is also called Spring Festival, the holiday can be traced as far back as the Shang Dynasty (1600–1046 BC).

What are the origins of Lunar New Year?

It’s hard to know how people celebrated during the Shang Dynasty, but it is widely accepted that sacrificial gifts to gods and ancestors were involved. Similar practices continued through the Zhou Dynasty (1046–256 BC) when the term ‘Nian‘ first appears in historic records. Nian (年獸) is a lion-like beast, but the name also means ‘new year’, and many of the ways in which the new year is now celebrated can be traced back to stories about it.

According to folklore, Nian would rise from the sea each year to devour people and livestock. Fearful of becoming a tasty snack, people used to hide until one man made a life-changing observation: Nian, despite its sharp teeth and hearty appetite, was terrified of loud sounds and the colour red. It is for this reason that fireworks and the colour red feature so heavily in the celebration of Chinese New Year. Lion dances, often featuring loud noises, also mimic how Nian was driven back into the sea.

In the Han Dynasty (202 BC–AD 220), yearly celebrations became fixed to the beginning of the new lunar cycle. Ever since, the holiday has been celebrated according to a 12-moon cycle.

How is Lunar New Year celebrated?

Early celebrations emphasised the importance of family, and the tradition continues today. People give offerings to ancestors and gods, often in the form of food and money. These offerings are expected to ensure a good new year and might even involve a little bribery.

In some homes, the lips on images of the Kitchen God (灶君) are rubbed with honey before the new year. This is done so he only has sweet things to report to the Jade Emperor (玉皇) – the principal deity – about the family’s behaviour.

Homes and cities are also given a nice scrub and adorned with red lanterns and auspicious floral arrangements and decorations, all of which is meant to scare off Nian and usher in prosperity and good fortune for the new year.

Children and unmarried adults will enjoy more immediate fortune in the form of red packets filled with money. These red packets (紅包, hóngbāo) are given by parents, elders and employers to ensure safety and comfort in the new year. Denominations vary according to the relationship with the recipient. The practice has even modernised for the 21st century, with WeChat offering an option to purchase and distribute electronic packets.

Why do so many people travel for Lunar New Year?

In China, festivities for Lunar New Year last 15 days, each of which has a specific set of traditions. One such practice is a homecoming prior to the first day of the Lunar New Year. So many revellers return to hometowns for the holiday that it has been dubbed ‘the world’s largest annual human migration’.

The strain on China’s transport systems has steadily grown since the 1980s, when much of the country’s rural youth moved to larger cities for employment opportunities. Because homecoming and reconnecting with family members for the new year is so central to the holiday, train stations, airports and motorways are jammed during the season.

This isn’t much different from the travel westerners undertake during the Christmas season, but the sheer number of people who celebrate the holiday often elicits sensational headlines.

What is significant about Lunar New Year foods?

As everyone knows, going home to visit family often involves almost eating yourself into a food coma, and the new year is no exception. Though traditional foods vary from region to region – China boasts eight regional cuisines – many of the foods eaten for Lunar New Year find their place at the table for symbolic reasons.

Dishes with fish are a must for the new year table, because the name for fish (魚, yú) is a homophone for the word for abundance or surplus (余, yú). Eating fish is meant to ensure that abundance will carry into the new year.

Other dishes, like jiaozi (dumplings), are served in Northern China because of their appearance. Depending on the means of preparation, jiaozi can be made to look like silver ingots or gold bars, and eating them is meant to usher in wealth for the new year. Similarly, dried scallops are eaten because they look like Chinese coins.

What are the animals of the Chinese Zodiac?

Each Lunar New Year is aligned with one of the animals of the Chinese Zodiac. The order of the cycle – dictated by the results of a mythological race set by the Jade Emperor – is: rat, ox, tiger, rabbit, dragon, snake, horse, sheep, monkey, rooster, dog and pig. People born in each of these years are understood to share traits associated with their zodiac animal. For example, 2019 marks the end of the 12-year lunar cycle with celebrations for the Year of the Pig. As people born in pig years are expected to have easy-going temperaments and uncomplicated lives, pig years often result in a baby boom.

Many countries in East and South East Asia also observe the importance of these animals, making the name ‘Chinese Zodiac’ a bit of a misnomer. While some of these countries share China’s traditions, Lunar New Year celebrations outside of China are distinctly different.

Though the varied celebrations of Lunar New Year are often lumped together under the Chinese New Year moniker, many of these countries have their own name and celebrations for the holiday. In Korea, the Lunar New Year is observed as Seollal, Tết is celebrated in Vietnam – where the year of the cat is observed in place of the rabbit – and in Mongolia, the holiday is called Tsagaan Sar. In Japan, the holiday is no longer celebrated in conjunction with the lunar cycle, but on 1 January – a result of westernisation during the Meiji Empire.

Regardless of how or where it is celebrated, Lunar New Year is a time to reconnect with family, share gifts, eat (and drink) too much and enjoy the possibilities that the new year will bring.