Chinese Musicians You Should Listen to Based on Artists You Like 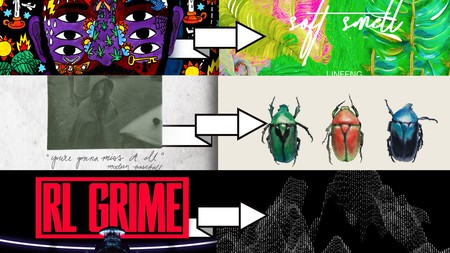 Like its neighboring variations K-pop and J-pop, C-pop has seen its share of success on the global stage. However, the underground Chinese music scene to any outside the country has almost entirely remained as just that. While language barriers and internet fissures makes cross-country visibility difficult, consuming music so outside of our typical spectrum is far from a natural process. In order to temper this trial, we have paired several Chinese artists that deserve your ears with comparable (we are not insinuating that these musicians craft the same music, but that a Venn diagram in listeners exists between the two) artists that have a much larger following within the U.S. and UK circles.

If you listen to Foals, try Future Orients

Indie rock is making its move in China, and independent Beijing label Maybe Mars is at the forefront of all that is hot in the country right now. Among that roster is Future Orients, whose debut album, Eat or Die, blends the mentality and gritty sounds of early 2000s emo and math-rock with the pop drive that will have you dancing through through its nine tracks.

If you listen to Kaytranada, try LinFeng

The most recent release from Shanghai-raised producer LinFeng, Soft Smell, combines elements of funk, R&B, and jazz into his electronic potpourri, giving it that appearance of being both vintage and modern that is dominating the scene right now. While the overall vibe is very laid-back, tracks like “Ice Cream Girl” (below) are just as suitable for the summer day-party dance floor.

If you listen to Black Star, try Lu1

It’s difficult to immerse yourself in hip hop where the rapper(s) are speaking a language you don’t know, but the cashmere smooth flow and the nod-to-the-beat boom-bap selection of Lu1 makes up for any lack in understanding. Teaming up with fellow rapper Cee, there wasn’t a better project in Chinese hip hop in 2016 than Lu1’s Farewell on a Midnight.

If you listen to Modern Baseball, try Carsick Cars

Another member of the Maybe Mars roster, there’s a reason Carsick Cars has been discussed in The New York Times and toured Europe with Sonic Youth: they’re probably the most influential band to emerge from the Chinese indie scene. You can bet that frontman and guitarist Shou Wang will go down in Chinese rock history as one of the first and best to do it.

If you listen to RL Grime, try Kai Luen

Kai Luen, previously Soulspeak, is a recent signee to the rising Shanghai label SVBKVLT. His 2016 album, The Hollow Ghost, is as haunting as its title suggests, shifting between frantic moments of heavy bass and flurries of ghastly instrumentation. When Boiler Room finally made their China debut last April, there was no surprise that Kai Luen was selected as one of the featured artists.

If you listen to Björk, try ChaCha

Considering that she has her hands in a multitude of projects and genres, it’s not very difficult to figure out why Shanghai vocalist ChaCha has picked up the nickname “Eastern Björk.” From her electronic project AM444 and various soulful singing features to rapping and her producer/DJ pseudonym Faded Ghost, when scouring the Chinese underground, there’s a good chance that ChaCha is involved in whatever project you stumble across.

If you listen to Shlømo, try Shao

Shao’s music is exactly what you’d expect to hear whenever someone walks, most likely in slow motion, through a seedy, dimly-lit underground rave in a film. His production dark and packed with merciless bass, Shao was also featured at Beijing’s Boiler Room debut.

If you listen to Bonobo, try SIG

There isn’t much out there to be found about SIG other than that he is a producer hailing from Qingdao, and that his first album is titled Sad Mirror. Let’s hope that SIG is still out there somewhere cooking up more moody beats.

If you listen to Nicki Minaj, try Vava

Women in U.S. hip-hop are slowly starting to get their due recognition, but China still has a long way to go in terms of incorporating more female emcees. Hopefully, the music of artists like Vava (and recent Sing! China contest success Vinida) will help speed this process along.

If you listen to Aesop Rock, try Kafe.Hu

While trap currently has a grip on the Chinese hip-hop scene, the jazzy, experimental forays of artists like Kafe.Hu will ensure that the genre remains dynamic.

If you listen to Purity Ring, try Jia Huizhen

If you listen to New Order, try The Big Wave

The Big Wave are bringing back the best of the ’70s and ’80s new wave, post-punk (nu-nu new wave? Future present post-punk?) music you’ve been craving, and if that weren’t enough for you to love them, the Beijing-based trio apparently dress up like scientists during their shows.

If you listen to Explosions in the Sky, try Glow Curve

While Wang Wen are the longstanding governors of Chinese post-rock, Glow Curve are currently doing it best. However, to label them simply as post-rock would be far too limiting. Similar to how bands like Moving Mountains tiptoed between similar genres like post-rock and progressive rock, Glow Curves isn’t afraid to give songs like the self-titled track moments of pop construction, and it pays out in heaps.

If you listen to GRiZ, try Lofimaker

Traditional Chinese music given trap and trip-hop flips? Thank you very much, Lofimaker.