Chinese City Has No Space for Train Tunnel, Builds Through Houses Instead 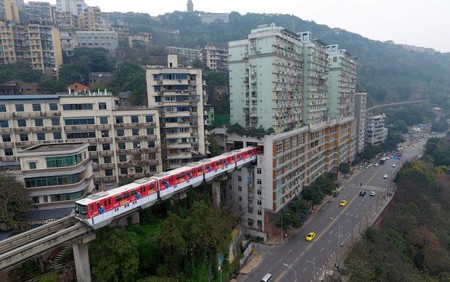 Yes, a city in China has literally drilled a massive hole through a 19-storey block of flats. Well, sort of.

Designed to go straight through your door (well, almost), the light railway track has been built through floors six to eight in the city of Chongqing.

So how loud is it? Well, according to residents, it’s no louder than a simple dishwasher. What’s ever better is that all the residents in the building can conveniently hop on the Chongqing Rail Transit No.2 from the Liziba station located inside the building. Talk about a shot stroll to the train station.

Nicknamed the ‘Mountain City’, Chongqing is home to 49 million people who are packed into just 31,000 square miles of land: ‘Our city is very heavily built upon and that can make finding room for roads and railway lines a real challenge,’ a city transport spokesman said.

What a great way to solve spacing issues, eh?